What is the percentage of getting "Soft Humanity", and what affects it?

In Dark Souls, when you first start off you have a fairly high chance of getting Soft Humanity[1] whenever you kill an enemy. As a fairly experienced player, I rarely die before I ring the first Bell of Awakening, so by the time I have reached the Gargoyles, I already have enough Humanity to Revert to Human, and Kindle the Bonfire.

However, as the game progresses, regardless of how well I might be doing, collecting the Liquid Humanity from fallen enemies becomes less and less of an occurrence.

[1]Soft Humanity: the Humanity that goes straight to your counter when you collect souls after killing an enemy; characterised by a black stream

According to the Dark Souls Wiki, the humanity automatically gained by killing enemies is determined by an invisible "humanity meter".

After each humanity you receive, the meter gets reset and needs more points to reach the next reward. Different humanoid enemies contribute different amounts of points to this meter, which is why in some areas it will take longer to benefit from the system than in others. There are also areas where "liquid humanity" isn't gained at all.

You can only gain humanity this way in areas in which the boss is still alive, up to a maximum of 10.

Here are the values taken from the wiki: 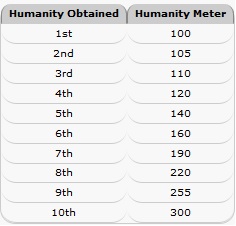 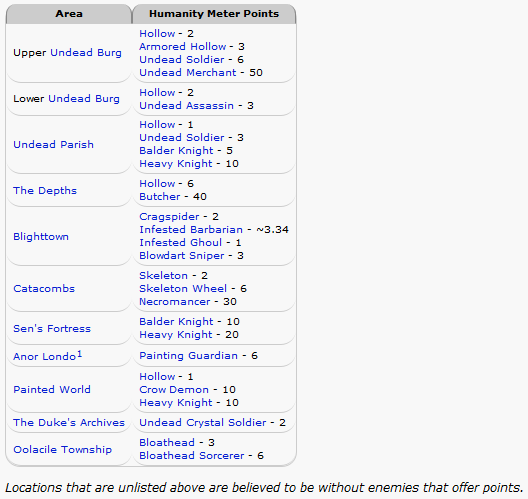 1
Why is it after I unhollow, use Humanity and kill things, I gain Humanity?

27
What is the relationship between Dark Souls and Demon's Souls?
15
What are the advantages and disadvantages of being in human form?
3
What are the two floating circles/rings in The Catacombs?
5
How do I use the sword and shield I found?
1
Why is it after I unhollow, use Humanity and kill things, I gain Humanity?
6
How does the choice between Kaathe and Frampt affect the game?
2
What is the limit of Estus flasks?