I'm trying to build a map in Minecraft on PS3, so far I've build a redstone counter. You can select up to 4 players and the counter counts up which player has to play.

But I have no idea how I can set it up so when a player isn't playing, say player 4, I can make the counter skip that guy so it's back to player 1. The same with when someone dies, I have to skip that player.

Here's a little bit more information: So basicly you spawn in a room where you can see 4 buttons , each button has its own color, there's red, green, blue and purple. It also says player 1,2,3 and 4. If you are with 3 players , player 1 presses the button where it says 'player 1' and player 2 presses button 2 and so on. Then you click the lever the game starts and the redstone lamp next to player 1 starts blinking, indicating it is player 1 its turn. Player 1 stands above 2 pistons and presses the button . With a randomizer he has chance to fall or not fall. Once he presses the button the redstone lamp at player 2 starts blinking indicating its hes turn, but imaging he pressing the button he falls and dies. All that i have figurated out with redstone. The only thing i dont know what to do is when a player is not playing , example player 3 and 4 , and what happens when they die, i might be able to detect it when they die but i have no idea how to skip a players redstone lamp from blinking, because when there are only 2 players, once the third time pressing on the button happens, the 3rd redstone lamp starts , but i dont want that to happen because that player hasnt joined, i'd like to skipp 3rd and 4th player so its back to player 1.

I play only on Minecraft for PC, but the concepts should all be the same. The basis for my solution is to have a tripwire at the bottom of the hole into which a player falls (pressure plates will work too, but require a slightly different method of collecting a redstone signal). This tripwire triggers a non-sticky piston which pushes a block (any solid block will do), completing a shortcut which re-routes the redstone around that player's turn. To accomplish this, we will need to use the fact that redstone repeaters can collect the signal from a block which has a charge being put into it. An illustration of this would be [r][B][>], where r is the activated redstone dust, B is the solid block, and > is the redstone repeater. As long as r is activated, > will also be activated. In the case below I use [>][B][>], which works in the same way, but allows two redstone circuits to run side-by-side without interfering with each other. Note: > and < for repeaters represents the way the repeater is facing.

From a top-down view, this is my solution:

See the picture below if you are still confused: 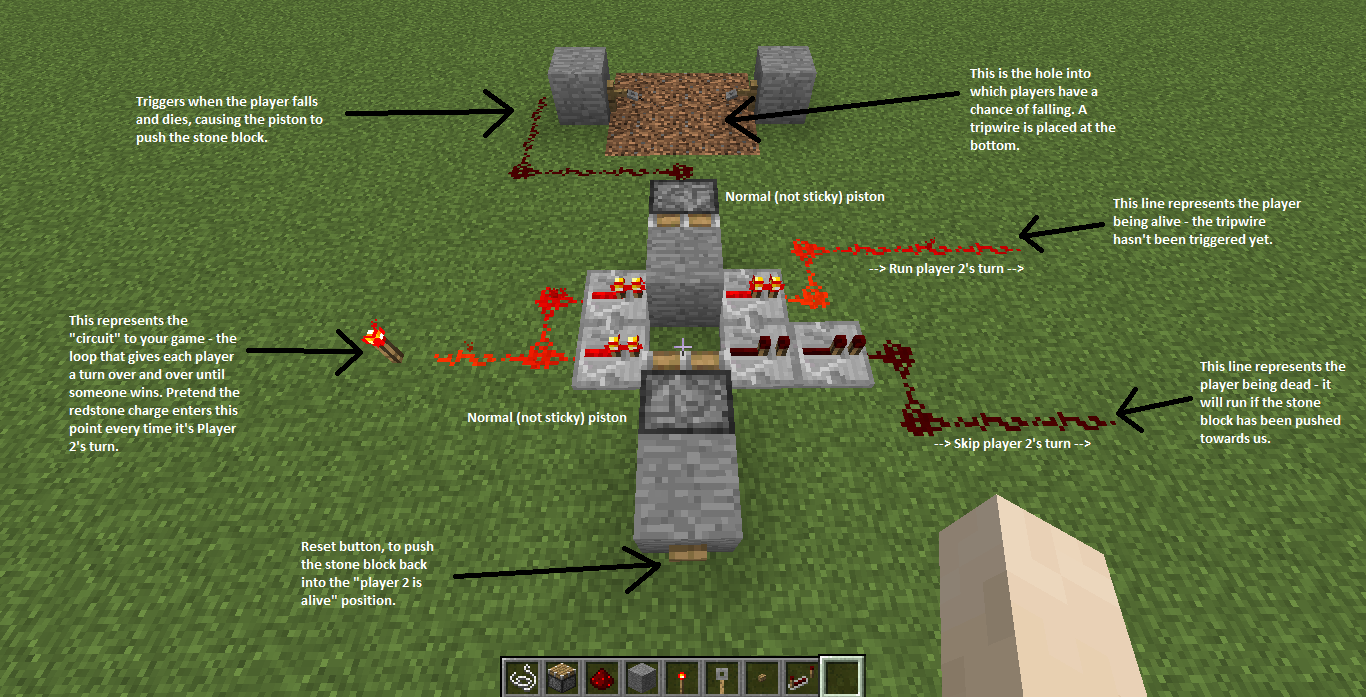 4
How can I make a reliable and compact random timer?
13
Powering a Redstone Lamp on top of a Piston
6
Burnt-Out Redstone Torches Re-Ignites Randomly
3
Toggle redstone circuit
1
How can I stop or reset redstone contraptions based on player deaths?
2
Redstone to detect "falling" (self closing trapdoor)
3
Why ever turn off the redstone clock in this mob farm?
5
Why does parity of redstone wire length affect piston behavior?
2
How to make redstone lamps light up one by one?
0
Redstone circuit that activates from two inputs, but only requires one input to stay on