What notes do the different colors correspond with?

The title really says it all. I can't find anything about it on the Internet (then again, I never find anything), but it's obvious that songs can't be played with 5 notes. I still think there must be some kind of system behind it...

There are no notes that the colours match with. They are simply used to denote increase or decrease in pitch, and "chords" when used together.

On a real guitar, you have six strings each with 20+ frets, which are difficult to replicate exactly without making the game needlessly complex. The key to the game is its simplicity while still feeling like you're making music, so if you had a button for each fret on each string, it'd defeat the purpose. Not to mention that there are only 5 buttons despite there being 7 notes in a major scale, which means buttons would need to be mapped to multiple notes, which would particularly make chords end up strangely but would also mean certain buttons get pressed much more often.

But that's not as important to developers (or players) as capturing the feeling of playing. If you've played guitar at all, you know that as you finger the frets toward the base of the instrument (the wider part where you strum with your other hand), the pitch gets higher. So, what the designers decided would best imitate the feeling of being a rock star is having the player's fingering moved toward the buttons nearer to the base of the guitar, not based on mapping notes to them, but based on each phrase of a song being played, and where that phrase hits its highest notes. Those notes are usually mapped to either the fourth or fifth buttons, and pretty much everything else is organized around that.

The colors are just to help you correlate what feat button you are suppose to hit. As others pointed out typically the pitch gets higher on the higher frets, but the whole color coding/fret layout is to simplify the act of sight reading on guitar which it conveys the simple idea while being very accessible to people who don't play guitar.

Typically you'll shift your fingers up and down the neck to play at different positions, but once you are there you'll typically say there and hit note across the frets at the position you are at hence why there are 5 frets.

When you are actually playing a song you take advantage of the different positions to minimize movement, but you still need to hit the right notes at the right time which the fret scroll is acting as in a clever way.

For example for Sweet Child of Mine (in Guitar Hero 3) on a real guitar you would see either the sheet music:

On guitar hero instead you see this: 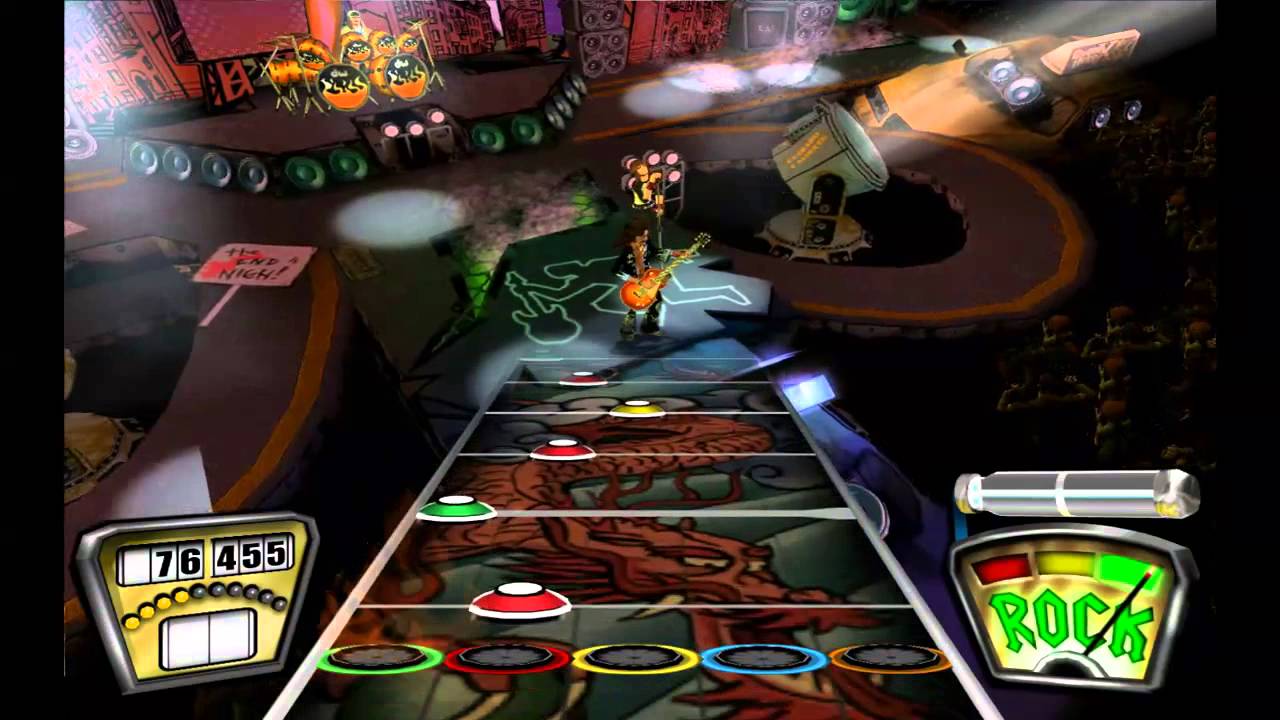 Seeing fret numbers would not be as intuitive as the colors for an obvious reason as the colors pop more especially at higher speeds.

Not the answer you're looking for? Browse other questions tagged guitar-hero or ask your own question.

1
Are the Lips wireless microphones for Xbox 360 compatible with Guitar Hero and Rock Band games?
8
Difficulty and features of Guitar Hero versus Rock Band for the PS3
5
Which Guitar Hero/Rock Band titles does the WarBeast guitar work with?
1
In Guitar Hero, what visual, audio, and score feedback does the game give for hit or missed notes?
9
Songs developing a lag as they progress