So I recently found this message in Dark Souls. It was definitely left by a player, since it doesn't have the developer message icon, yet it does not follow the available options when using an orange guidance soapstone.

I have also seen: "Try: Wings" and might have missed a handful others that don't match any template. What happened here? 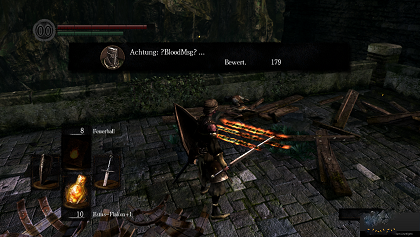 If the message does not match ones you can create yourself, it was placed by a a cheater.

It certainly could have been placed by a cheater, if they can hack the Dark Souls server. Everyone needs to google the divide between server and client side in an online game, because it is too tedious to go through what is possible for cheating and what is not. Suffice it to say the client logs (and the server saves without checking) the X,Y,Z coordinates of the message, so a cheater running a noclip could place a floating message off a cliff (I've seen this in Undead Burg, among other places), but the server is what gives you the options on what you can write (note you have to connect before selecting your templates).

These messages are a result of unimplemented or poorly implemented translation when region lock was removed in January 2015. I started seeing them the day after it was removed. The problem language here is likely Japanese, as it is extremely different from European languages, and difficult to translate one to the other. As Dark Souls was built with region lock, there is probably a lot of buried code that was missed for translation. I've actually seen that message (leveling a new character, my first is now too high a level for PvP it seems). Note where it is: it is in front of the boards the Hollow Warrior hides behind to break through and ambush, so you're looking at a warning for the ambush. Try:Wings is always written by a cliff, so it's yet more of those incredibly witty and not at all old Try Jumping messages.