Having problems with using the mods button on the pip boy

Can someone help me. I am unable to use the mod button on Fallout NV I have a non GRA mod and non GRA 357 magnum but whenever I use the X button nothing happens also it's not faded

Here's the revolver in question: 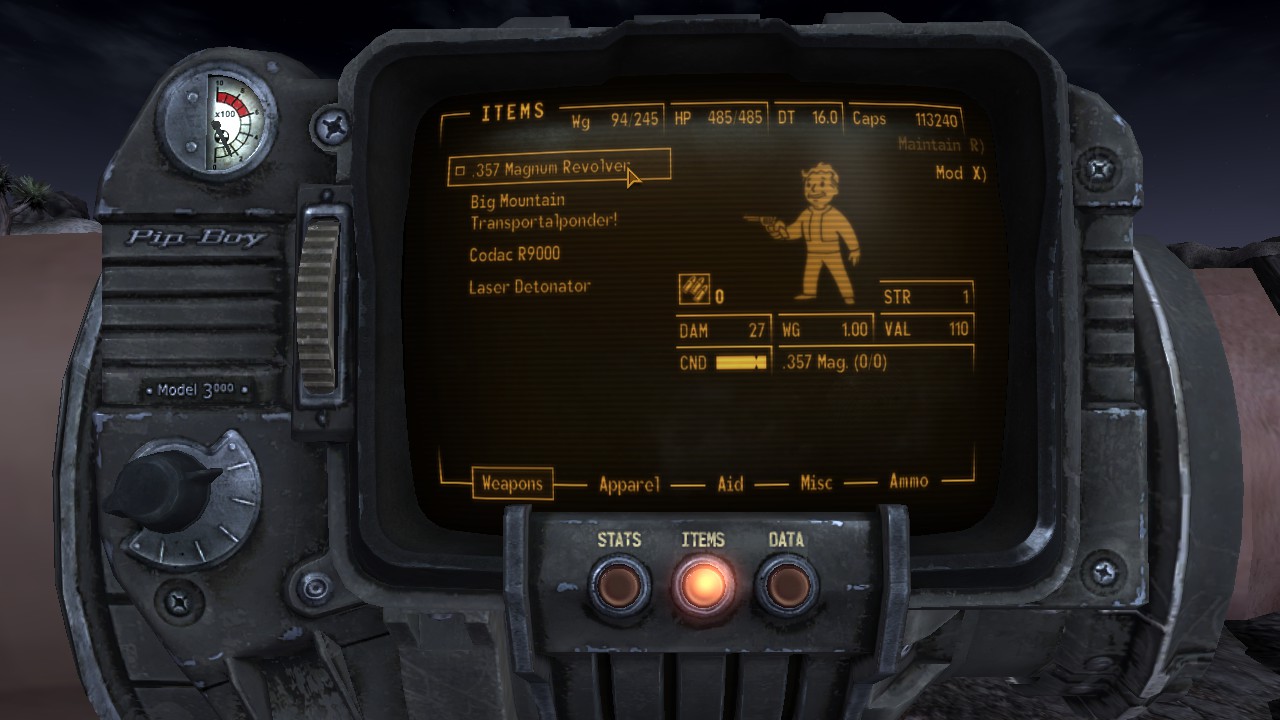 The Mod button is highlighted in the top right. When you press X the below menu should appear (forgive me for having only one mod, couldn't find another one). 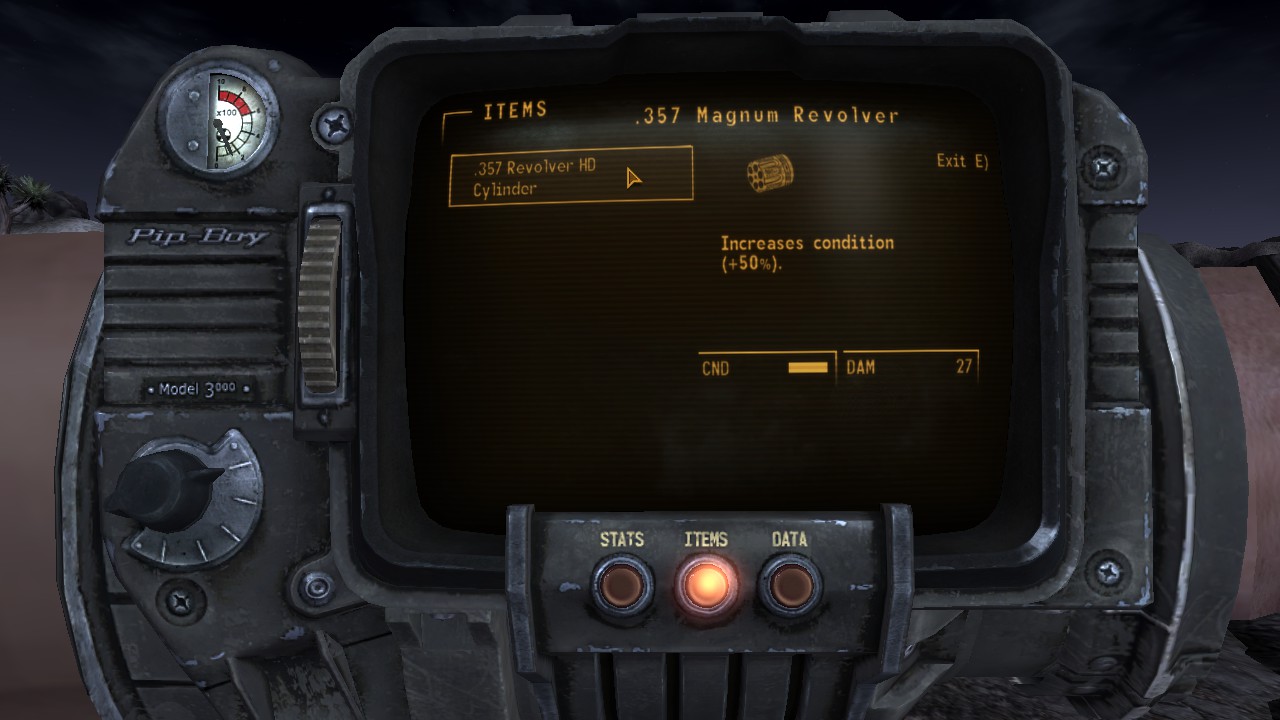 When you click on a mod, it will be attached to a weapon (it will be noted with a "+" next to its name, and the attached mod will be listed in weapon's properties panel: 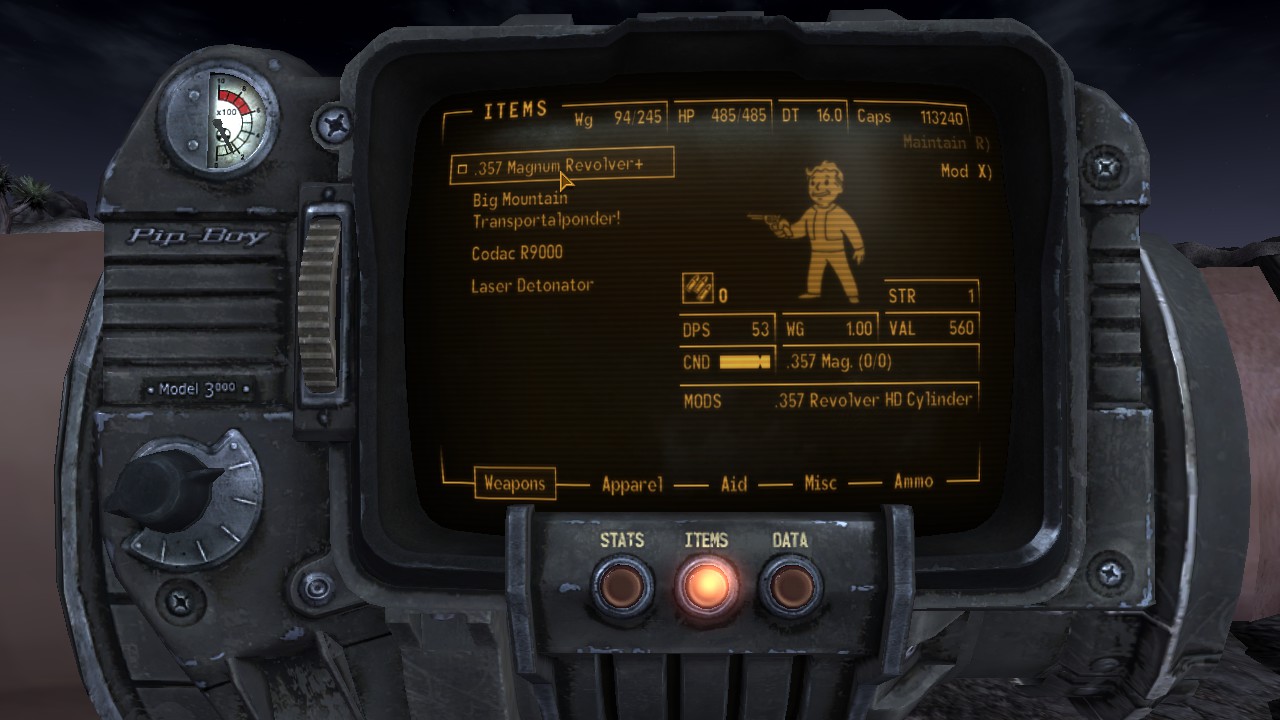 Make sure you have appropriate mod for a weapon - it's usually obvious from a mod's name which weapon it's for. Also, since you tagged this question as "pc", I assume you're pressing X on keyboard and not on a gamepad.

I don't remember having to use the keyboard (maybe that's the problem; you can't), click on it with the mouse instead. Same goes for if you have a controller: try the mouse. Also, some guns will only take certain mods, and it's either a bug or something, that keeps mod lit up even though the mod won't go on it, as I've had that happen to me, too. I do however have a bunch of mod files installed, including Fallout3, in its entirety.

There's only two mods for the 357 (falloutwikia):

All weapons have had their tags (GRA, Mad Bomber, etc) removed, and vanilla versions of weapons use the GRA weapon mods instead.

It's Page Up. After a firm hand on the keyboard and swiping left and right, finally figured it out.

4
I am having trouble interacting with the Brotherhood
3
Mouse acting strange ingame, screen rotates on right mouse move
23
Where are good home base sites in Fallout: New Vegas?
2
Moving Fallout NV game saves between PS3s?
8
Blood on the Ice - No interaction with the clues in Hjerim possible
7
Can I run a Fallout mod launcher and have Steam think it's the original game executable?
4
Is there a way to get all items off a merchant before I kill them in Fallout: New Vegas?
4
Fallout New Vegas, hardcore mode. A doctor refuses to heal non-crippled damaged limb of the Courier in full hp