How exactly does armour and damage work in Elite: Dangerous

This is a follow up to How exactly do shields work?

Once shields are down how do armour and damage work in Elite: Dangerous? (I realise that this is several interconnected questions):

This answer is compiled from various answers buried in the Frontier forums. It is accurate as of late September 2015 but Elite is still evolving and this may change with the Horizon's release.

How is armour calculated for a ship?

Base armour is a basic statistic of each ship. Typically heavier and combat ships have more armour.

Armour contributes to the amount of hull hit-points (HP) that you have. Regardless of this number in your HUD you'll see this as a percentage.

Internal modules have their own HP, depending on the class and rating of the module. These HP are not added to the total, but represent how much damage the module can take before it is destroyed.

What difference do different types of bulkheads make?

The first three types of bulkheads affect the total number of HP your ship has, they do not reduce the amount of damage taken:

The last two add the same amount of HP as the Military Grade Composites (MGC) but modify the amount of damage by the weapon type:

As Pulse Lasers are overwhelmingly popular with players Mirrored is probably the most useful for PvP combat.

What do Hull Reinforcement Packages do?

Hull Reinforcement Packages increase the total number of HP your ship has, which has an indirect effect on penetration chance. In 1.4 they they didn't block penetrating shots but as of 1.5 they provide a small damage reduction (according to Sandro Sammarco):

We're adding a small amount of damage reduction to hull reinforcement packages. These are additive and increase the effectiveness of the packages (including module protection, as the damage reduction gets applied before modules are hit).

Does armour affect protection of modules or just the hull percentage?

The protection your modules have is always a chance based on your overall hull percentage, so a ship at 100% hull is far less likely to take internal module damage than a ship at 50%.

Where this makes a big difference is as your armour takes damage how effective it remains.

For instance, suppose you have a base ship with 100HP. A rival ship has the same hull, but has added Military Composites (so 200HP) and a 20HP Hull Reinforcement Package for 220HP overall.

When the damage goes through it is applied to a model of the ship: 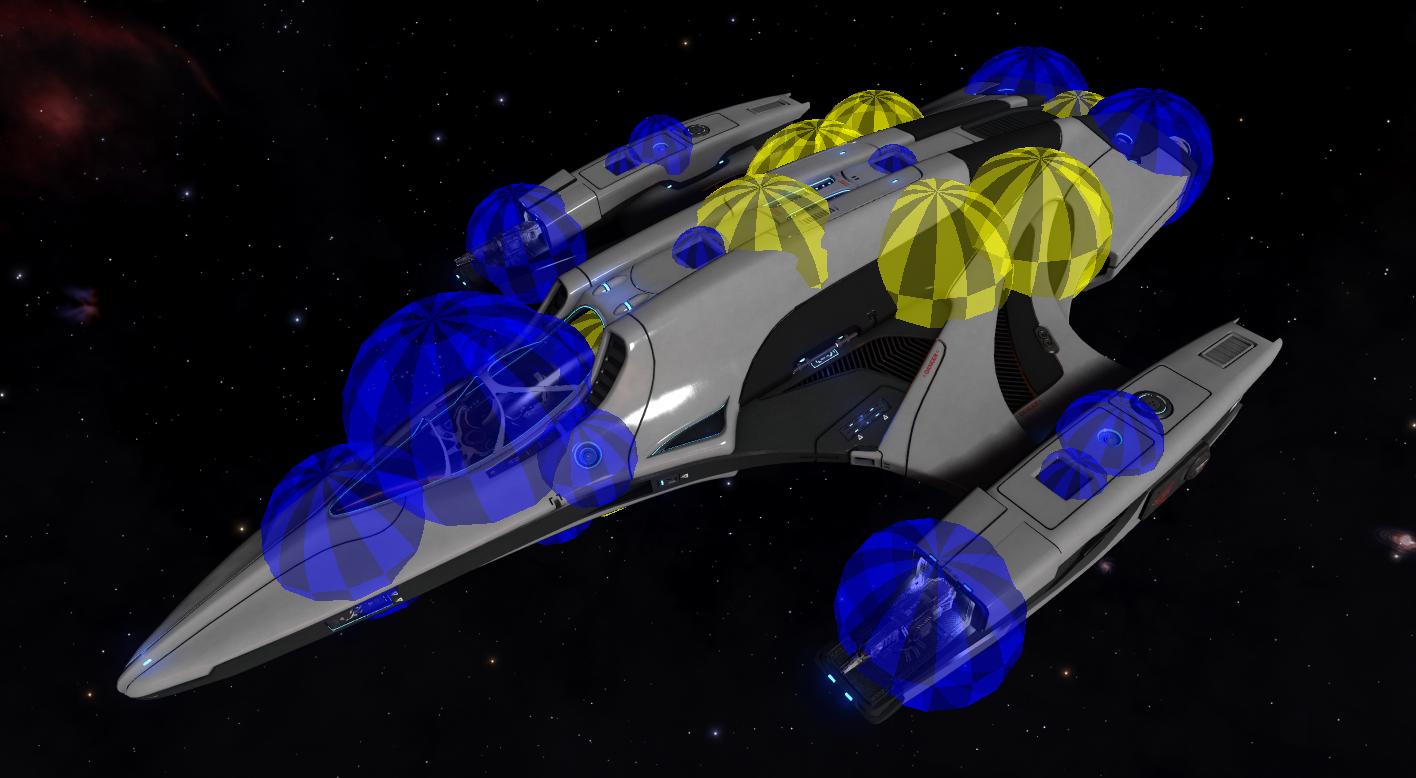 Each sphere represents an module location, blue (external) don't require penetration, yellow (internal) are checked against a penetration distance for the weapon. If inside a sphere there is a % chance of a module hit depending on how close it is to the center of that sphere.

Ship armour has an internal hardness statistic, roughly based on size. Each weapon type and size also has a penetration statistic. These are compared and used to reduce the weapon's damage if the penetration is much lower than the hardness.

According to Mark Allen:

The main intent of this mechanic is not to penalise small ships, but to make large weapons effective against large ships without one-shotting smaller vessels - they don't actually do that much more flat damage than a small weapon but by piercing much better are far more effective against the harder target.

Again according to Mark Allen:

This also means that stacked weapons (for instance the 4 C1 mounts on the Asp) are deadly for small ships but relatively ineffective against large ships with high armour hardness.

Note that much of this is likely to change. In the 1.4 release damage to the power plant module no longer kills the ship (making armour more effective overall) and the nerf applied to small weapons in 1.2 and 1.3 has made some currently useless (for instance missiles are very ineffective against large ships). In 1.5 hull reinforcement packages add a damage reduction that stacks.

10
How exactly do shields work in Elite: Dangerous
3
Would it give me more armor if i would use Lightweight Alloys with Hull Reinforcement Package,