Why am I unable to purchase a tile outside of my current cultural area?

Is there a way for me to select which tile my city expands to? In the example below, I would like to expand to the gold tile in the north east, but it looks like the city will take the highlighted tile in the south west. 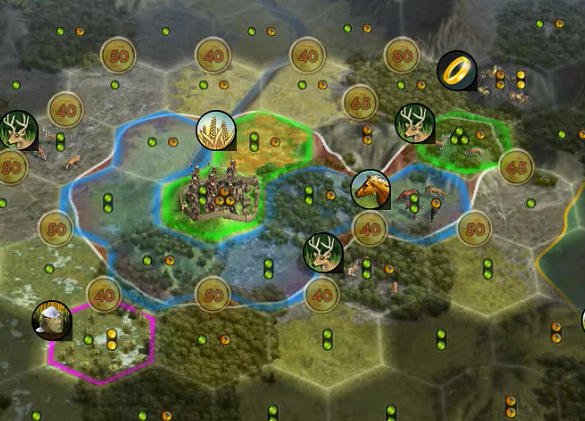 In this case, I also can't buy the gold tile, I assume that is because it is out of my city's range. What must I do in order to secure the gold tile in this example?

You can only purchase tiles that are directly workable by your city, which means only tiles that are within 3 tiles of your city. City cultural expansion can move beyond those tiles, but occurs randomly. You cannot direct it.

If you really want that gold tile, you can plant another city on or near it, or you can use a Great General to construct a Citadel within one hex of it. (That's assuming Gods & Kings or Brave New World. Use a Great Artist's Culture Bomb in vanilla.)

As Jason said, you can't really direct the cultural expansion. It is not exactly random however. I haven't looked directly at the algorithm, but from my experience

You can't directly snag that tile, but if you have enough spare gold, you can influence it to try and select that tile for cultural expansion, essentially by buying up the ones it would select. In your case, if you bought up the 2 remaining deer and the salt, you probably have a decent shot at the gold getting selected. Your city is small enough that it might decide you have enough workable land headroom that it'll go for the resource. You might have to go as far as buying up all the other tiles, barring the tundra and maybe the marsh.

Failing that, grabbing at least the existing resources would both give your city a decent start at growth, and give you a head start to the culture growth finally reaching it. It doesn't look like there's a rival (at least not in the field of that screenshot) so you might have time, if you're not hurting for the happiness or a city-state quest.

9
Why would spending money on a tile lower my score?
4
Unit tile swap. Works one way and not the other, Why?
4
What should be my objectives when going to war with another civ?
13
What factors affect tile purchase cost?
6
Why am I unable to give a gift of gold to a city state?
1
Why does building something on a tile modifies the profit of it?
3
Why are my tile improvements taking too many turns to build?
3
Why is movement limited within enemies' borders outside the Great Wall?