Mining for a beginner

I've recently started playing Minecraft. Aside from all the building I've been doing, I think I've spent more time mining than necessary for rarer items. I realize I won't find diamonds on the surface, but I've spent hours underground to find one stone deposit of it.

Obviously, some of the better items are further down but is there a point to where you can get mass items from a certain block level? Say if I mine about 20 blocks down, can I expect to find more coal and iron? I've also learned that you can find villages in your map, do these areas have high item yield?

So for a beginner, what should I be doing to yield more items when mining? I only seem to get a ton of coal, cobblestone, and a little bit of iron each time.

Any questions I haven't listed here, and any other tips for a beginner Minecraft player is greatly appreciated! I'd also like to note that I'm playing on the Xbox One, if that matters.

Should I be mining near water?

For small bodies of water it makes no real difference one way or the other. That said, you have fewer mineable levels available if you're beneath an Ocean or Deep Ocean, so you may cut into some of the ore distribution ranges if you mine near Oceans. This will generally only affect Coal and Iron though.

Should I find a village and mine near it?

Again, the presence of a village makes no real difference to the underground ore distribution.

Does it matter if I mine during the day or night?

Yes and no. The time of day has zero impact on ore distribution. However, you will find it easier to mine during the night because you will encounter fewer enemies. During the day (unless it's raining) enemies will only spawn underground, whereas at night they will spawn underground and on the surface. Because there is a limit to the number of mobs that can be spawned, you'll run into fewer enemies underground at night time due to the greatly increased area in which they can spawn.

Should I use TNT near deposits or strictly stick to the pick axe?

Do not use TNT to mine. It's expensive and you'll destroy a considerable portion of your yield each time.

How far down can I start to expect to find better items?

With that said, here is a nice graph of ore distributions in vanilla Minecraft (credit goes to Reddit user cryzed- for this graph): 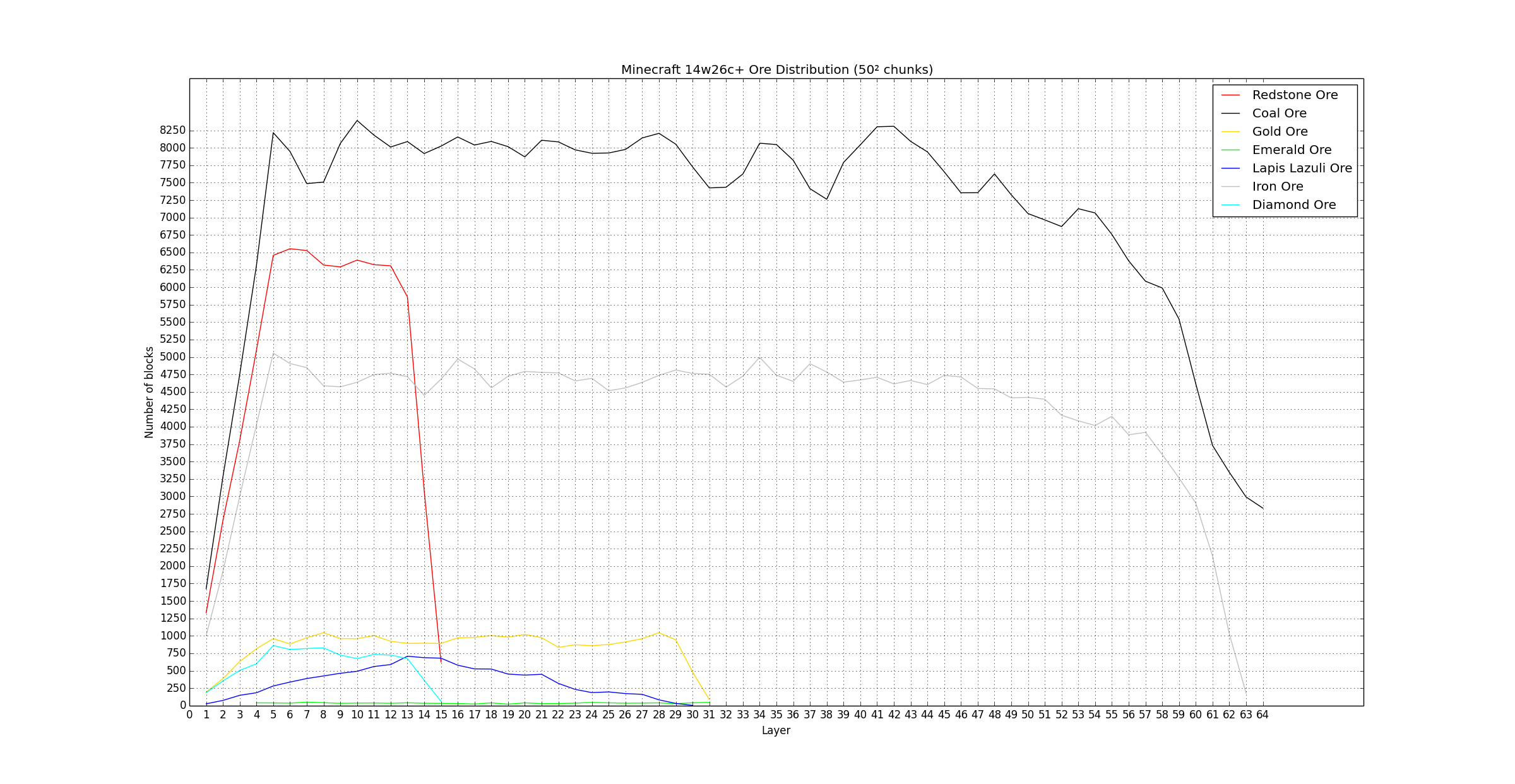 It's a little hard to see on the shrunk down version of the graph, but I'll go through the gist of it and you can click through to a much larger version if you like.

Another way to increase your mining yields is to use a pickaxe enchanted with either Fortune I, Fortune II or Fortune III. These enchants give a 33/25/20% chance to drop an extra 2/3/4 items respectively (yes, Fortune III procs less than Fortune I, but still works out better than I or II).

This is quite a subjective question but in terms of mining for rare items there are two main techniques you should try:

Find the entrance to a cave somewhere in the world. Bring a sword, a few pickaxes, a furnace, a crafting table, wood, coal, armour, a bucket of water and plenty of torches. Explore the cave, mining and lighting the way as appropriate. Press F3 on your keyboard to see your coordinates. (Edit: I didn't see that you're playing on console. For Xbox, you need to craft a map to see your coordinates. This is crafted with paper and a compass). The Y coordinate represents how high up you are in the world. In order to find diamond you should be below Y coordinate 16. If the cave network you're exploring doesn't go down that far, don't worry. Simply find another cave. In the vast majority of cases however, the cave network will extend down to around level 10, where the big lava lakes spawn. This method may not net you many diamonds but the benefit is you can find all the resources you can mine on the way down, including, but not limited to, redstone, coal, gold, iron and lapis lazuli.

This is a specific mining technique designed for gaining a high yield of diamond. The disadvantage is that it is very boring and takes a long time. The basic principle is to mine a staircase down to level 12, and then start mining in branches to your left and right. This allows you to essentially explore a large tunnel by only mining a few blocks. A detailed explanation can be found here.

As to your other questions:

Unfortunately no matter how far down you go the game will not generate more of a certain ore within a certain area. However you can maximize your output of ores by different strategies. For iron or coal or redstone, go caving and you can easily find stacks. For lapis and gold and diamonds and emeralds, strip mining will be your best choice, you can also find many other ores while doing so. Another advice to you would be that if you find a diamond ore while strip mining, no more will spawn in that chunk, so stop mining in that chunk, you won't find any more diamonds in it. Carry lots of torches, lots of food, and lots of iron pickaxes. (Enchanting them with efficiency helps too.) Hope this helps.

Mining on the console versions of Minecraft isn't much different from mining on the PC version.

The location or time does not matter at all, ores are generated randomly using a few minor rules for their occurrence:

Note: I don't know if there are any differences on the actual Y-level of the ores, but it seems very consistent around the web (Sources: http://minecraft360.wikia.com/wiki/Ore, http://minecraft.gamepedia.com/Ore)

TNT explosions have the nature of all explosions in the game: They destroy blocks and drops!
It doesn't matter how much TNT you use or how far away/near the ore you put it, it will eventually destroy your ore.
A TNT explosion might seem to drop all destroyed blocks, but it doesn't: It only has a chance of 25% of dropping the block as an actual item and all items around it will get destroyed (it deals damage to the drops and thus destroys them, much like fire or a cactus does).
(Source: http://minecraft.gamepedia.com/Explosion)

Not the answer you're looking for? Browse other questions tagged minecraft-legacy-console or ask your own question.