Game capture through Xbox One?

How does one record their gameplay and then post it to YouTube without the use of a capture card?

I know there is a way with Windows 10 were you can stream your Xbox One to your Windows 10 PC then use screen capture software. Can someone explain how you do this?

Streaming your Xbox One to Windows 10 is remarkably easy. The tricky part might come in quality assurance. If everything goes to plan, you should be able to simply scroll down, and follow the steps. If any issue arises, please see the troubleshooting section, at the bottom. At times this system is very intuitive. Other times.. not so much. I would appreciated comments on any issues I have not covered, so I can expand.

The first thing you will want to do is connect both your Xbox One and your PC to the same modem/router. This simply means connect them to the same internet source. It should not matter if there is an actual internet signal, just as long as both devices are connected to the modem/router.

Turn your Xbox One on, and open up the Xbox app on your PC. You can find the Xbox app by clicking on start and searching for "Xbox". Some computers may not have the Xbox app pre-installed. If this is the case, go to the Windows Store, and simply search for "Xbox".

With the app open, along the left side you will see a list of icons. Click on the "Connect" icon. It has the appearance of a version 2 Kinect.

On the next screen, select "add device". A window will appear, and Windows 10 will scan your network for consoles. After a couple of seconds, your Xbox should appear on this list. Click on it to connect.

While you might prefer to use a different program for game capture, that is integrated, too!

By default, you can stop and start recording by pressing Windows + Alt+ R. The video should record in standard quality, and save to \Users\User\Videos\Captures. You have a fair amount of customization, as well.

Under the "Connect" button, click on "Settings". Its icon is a gear. The settings window will appear, with the General tab selected. Select "Game DVR". From here, you can add custom shortcuts to all of the record functions, enable "background recording", set a custom save directory, and alter the video quality, among other things.

At this point, it would be worth also checking the "Xbox One" tab, under settings. From here, you can select the actual streaming quality, which will likely have an impact on the recording quality.

My Xbox does not appear under "Add a device"

If your Xbox does not immediately appear, ensure both Xbox and PC are connected to the same network. If there is internet, ensure both can connect to the internet, to confirm it is not a networking problem with either device.

If everything works, we will connect using the consoles direct IP address. There is a Microsoft guide here for how to do it, but it is fairly straight forward. On your Xbox One, Select Settings > All Settings > Network > Network Settings > Advanced Settings. A window will appear with all your network information. IP address should be listed at the very top of the list.

Write down the IP address, and manually type it in to the "Connect to Console" screen. This should let you connect to the console, directly.

I keep being told that the controller is not plugged in, but the Xbox One confirms its connected

It is also possible, in this situation, to use Xbox 360 controllers. More on that here.

The video quality is quite poor compared to the quality on the actual Xbox One.

By default, your Xbox One will not stream in its highest quality. To improve the quality of the stream, head back to the Settings page, in the Xbox app. You will find quality under the Xbox One tab. Select "high quality", and observe any changes.

The quality on my PC gets better; But my recorded video still looks\sounds bad. 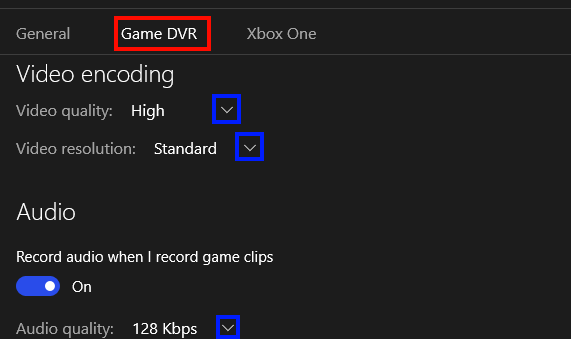 By default, the PC will still record the Xbox One in normal video quality and resolution. To improve the quality of the recording, head back to the Settings page, in the Xbox app. Select the Game DVR tab, and scroll to the bottom. At the bottom of the page, you can select between Normal and High quality for both video resolution and quality. You can also alter the quality of the audio, with a higher Kbps implying higher quality, or choose to disable audio all together.

I altered the quality settings, but the video still comes through in low quality

Your network and hardware also have an impact on the level of quality you can reach through streaming. Microsoft have a very well put together list of all the things you can try to improve streaming quality, but some suggestions are more practical then others;

This is a cool feature. I wish I could do this with my Xbox 360, PlayStation or other high-definition console.

Well actually, you can. I can not confirm on the capabilities of game recording, nor the quality, but keep in mind that Xbox One has a HDMI in.

Theoretically, any device connected to the Xbox One could be used in the same way. The only limitation is that the controller has to be connected directly to the console, not to the computer.

Well the easiest way I have found from experience

Not the answer you're looking for? Browse other questions tagged xbox-one recording .