What does KDA stand for in Halo 5 and how is it determined?

In Halo 5, there is a stat called KDA. I was figuring that it stood for Kill Death Average, but my stats are as follows: 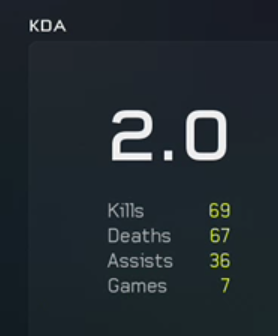 In most games it's simply (kills+assists)/deaths, but for Halo, it appears to be

The classic efficacy scores for FPSs are actually ratios- not averages.

KAD (KA/D). Kills plus Assists to Death. 8 plus 2 to 5 (10 to 5) simplified to 2 Accused of over rewarding assists, but the metric isn’t about individual scoring, this is still a great way to see how actively and well a player usually plays as a teammate (ie say you’re set up as a team in fixed fire positions the enemy keeps charging from and past the left gunner who’s spray of auto fire leaves targets for the mid gunner to single shot for the kill; LG gets 10 assists no kills, MG gets 10 kills no assists but both would have the same KAD in that scenario)

KDA (sometimes KDa or KD/A) Kills plus reduced/divided Assists to Deaths. Focus back on individual efficiency with some crediting for teamwork. 4 kills plus (4 assists/2) to 6 deaths simplifies to 1.

Not the answer you're looking for? Browse other questions tagged terminology halo-5-guardians or ask your own question.

15
What does does “QTE” under Witcher 2 settings stand for?
11
What does BM stand for in Gaming?
3
How does Halo 5 Guardians Warzone scoring work?
14
What does IP stand for?
22
What does P.E.K.K.A stand for?
31
What does RTC stand for?
3
How is my ranking determined?
2
How are the rewards for Warzone Firefight determined?
1
What do the PAL and NTSC abbreviations stand for?
4
What happened between Halo 4 and Halo 5