Is there a reason to reset after hitting diminishing returns for Karma and Paragon?

From my first reset I got 149 Paragon and 23 Karma, which is nice, because it gave +23 Happiness and +149% productivity (on most resources), noticeably increasing my resource production.

Now from the second reset I got another 81 Paragon for a total of 230, but my productivity only increased from 149% to 188%. Similarly, Karma only increased from 23 to 27.8. This makes sense because there are diminishing returns for both Paragon (capped at 200%) and Karma Kittens (some kind of square root function).

Since it took me a few weeks of sporadic playing to get from first to second reset, I'm now wondering if further resets would actually be any good. If the time spent building my village to, say, 150 Kittens will only yield a handful percentage points of increased productivity after resetting, I'd not consider it worthwhile.

Or are there other uses for large amounts of Karma and Paragon that I'm currently not aware of? I know there's Metaphysics, which allows you to spend Paragon, but I don't know how much I would need there.

Okay, I did some of the math myself, based on the formulas from the Wiki and on the source code of the game.

The answer is: Yes, it is worthwhile to reset, even after getting near the 200% paragon productivity cap. Read on for more details.

Productivity: The productivity boost is quite easy. It is capped, so you will never get more than 200% productivity out of it, unless you research tings that say "Improves paragon effect and scaling by x%". This will raise the cap to (200+2*x)%. These techs cost a large amount of paragon, stating at 500 and going up to 1750 at the time of writing.

Storage: Every 100 points of paragon provide a 10% storage bonus, which is not capped. So if you have 1000 points of paragon, your storage will have doubled. This is also increased by the upgrades mentioned above. So for this alone it is useful to have lots of paragon.

The relevant parts of the code are in prestige.js. Here's a bit of pseudocode which is a bit more readable than the original code. The getHyperbolicEffect function does the capping and is explained in another answer.

This one is not so obvious, and the graph from the wiki is actually a bit misleading, because the x-axis is in KarmaKittens, not in actual kittens. So I've done a few graphs in LibreOffice, which show the relationship between population size and Karma.

Resetting once: This one shows how much Karma you get when you reset the first time at a specific population size (orange curve, top, left axis). For example, I reset at around 210 Kittens and got 23.x Karma. As you can see, this curve is roughly linear with a few bumps although the formula contains a square root. This is because the formula for KarmaKittens (blue curve, bottom, right axis) crudely approximates a quadratic curve. 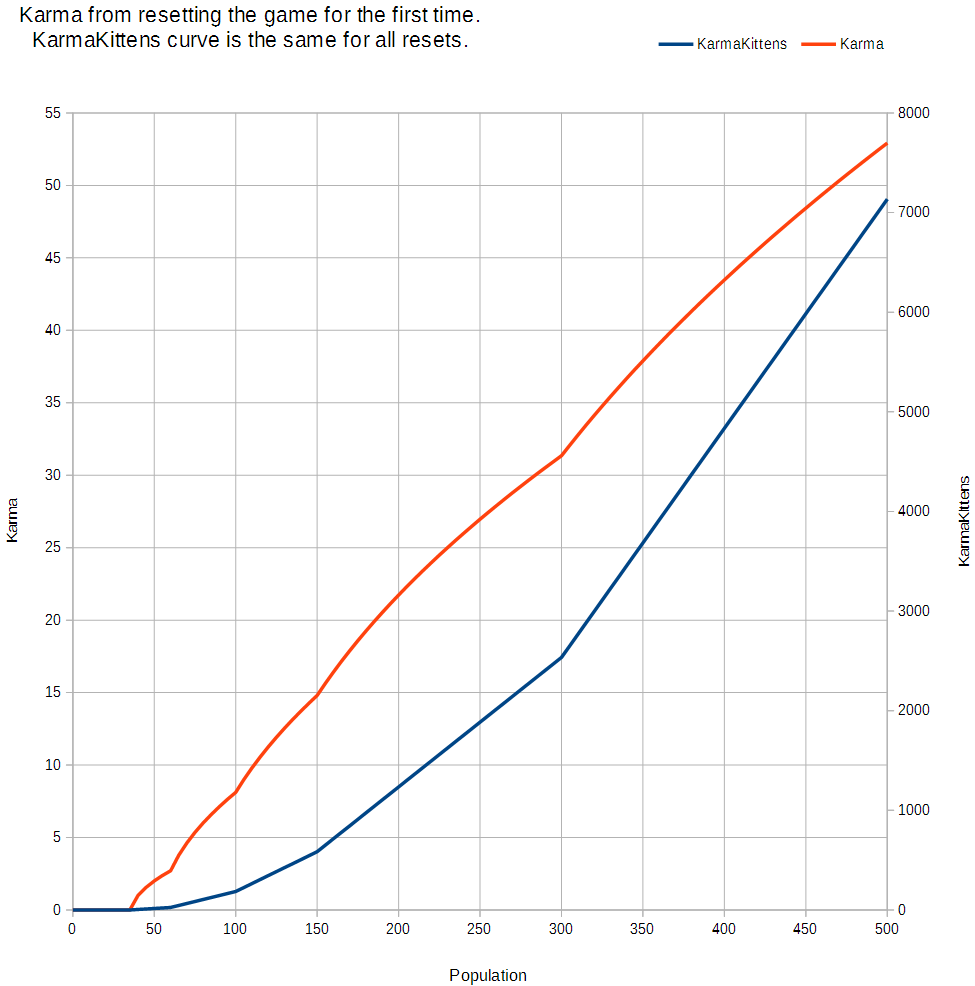 Resetting multiple times: Here you can see how much karma you get when you reset multiple times at a specific population size between 50 and 500, from bottom to top. Okay, 500 Kittens is a bit utopian, but still.

You can see for example that if you reset at 150 Kittens (somewhere after Concrete Huts), you'll have 30 Karma after your 4th reset, 40 Karma after the 7th, 50 after the 11th, and so on. You can also see that resetting with more kittens is much more effective than resetting often with fewer kittens. However, for a meaningful comparison, you would have to factor in the time it takes you to get to such a large population size. 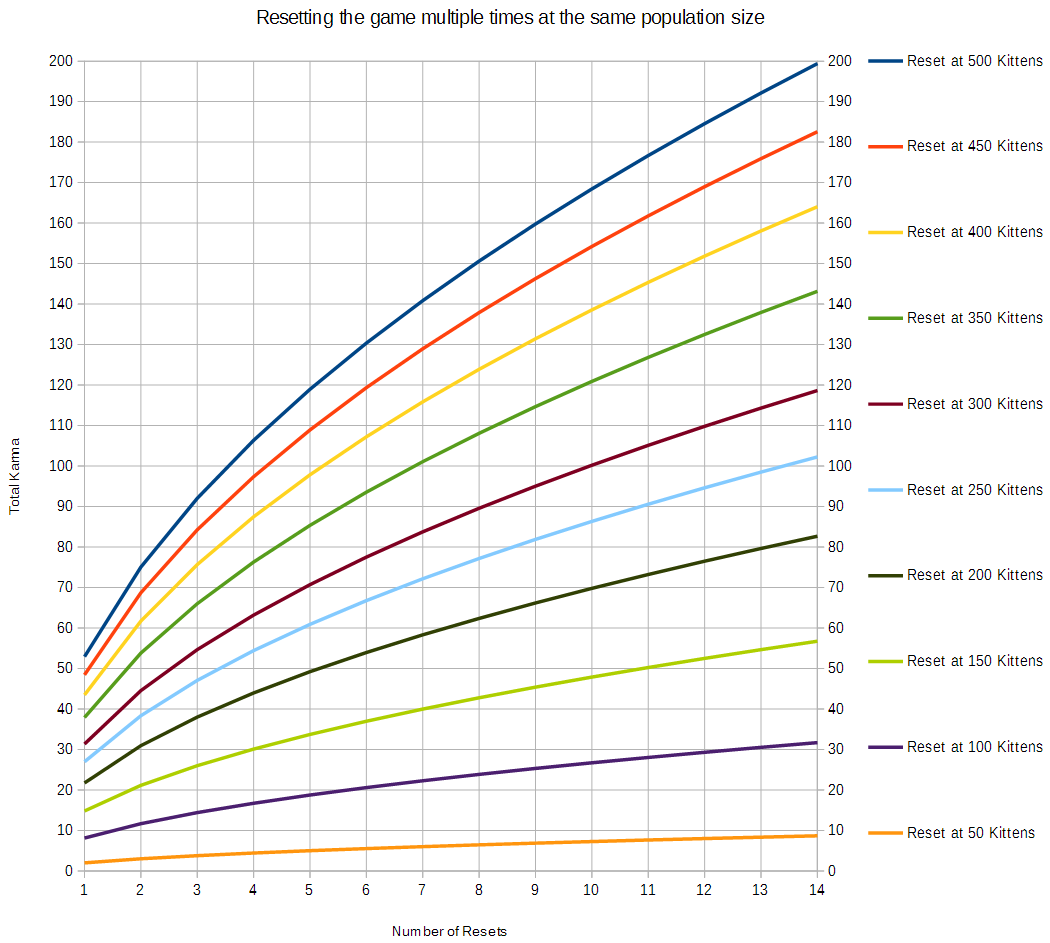 More resets: If you are really patient and reset the game lots and lots of times, here's the same graph up to 50 resets: 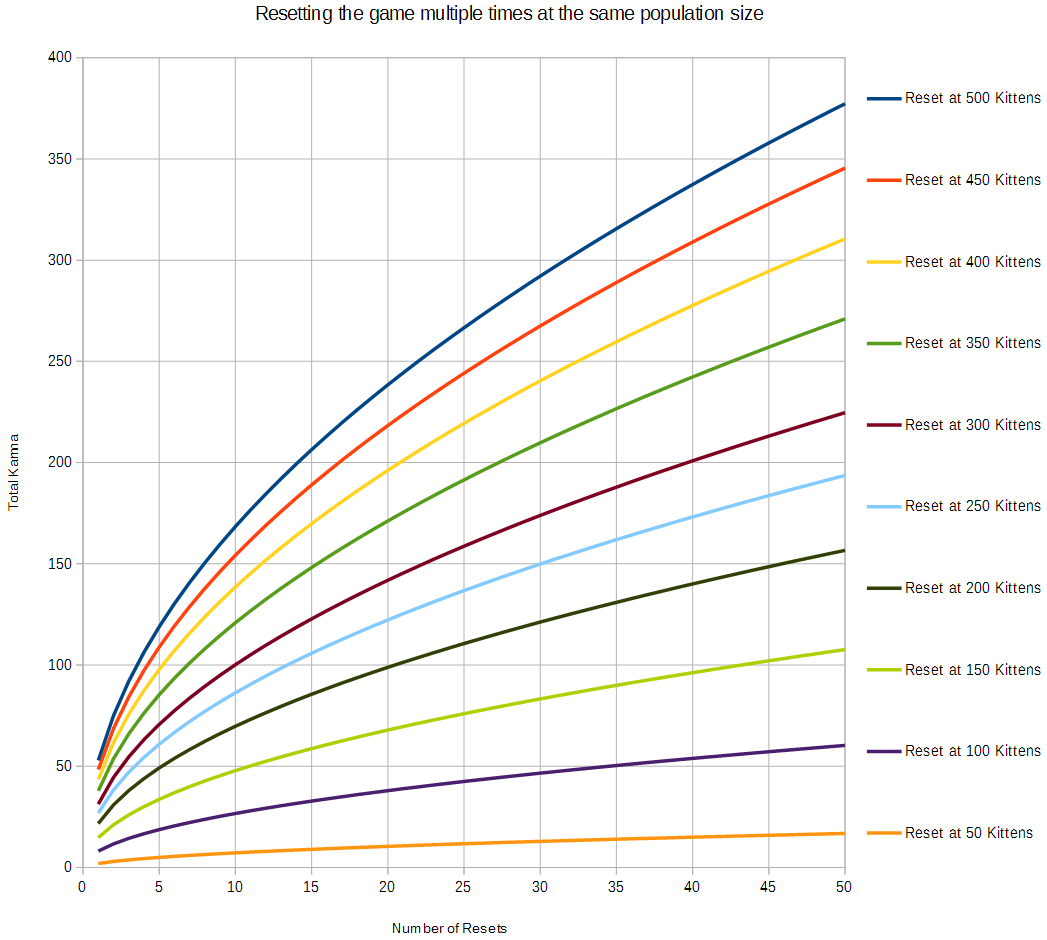 Nikana Reklawyks logged the kitten count during his "somewhat idle" game with 400 Paragon & 60 Karma. The following plot shows how much Karma he would have got from resetting at any point during that specific game, for different initial amounts of Karma.1

1. Of course, this graph does not account for the fact that you would get kittens a lot faster or slower depending on the initial amount of Karma.

For example if you had 50 Karma (the green curve, third from the bottom), you can see that at the end, after 216 Hours with 440 kittens, you would have 69 Karma after resetting. However, after the first 120 hours at 400 Kittens, you would already have got 66 Karma. So you spent the last 100 Hours for roughly 3 points of Karma and 40 Points of Paragon. 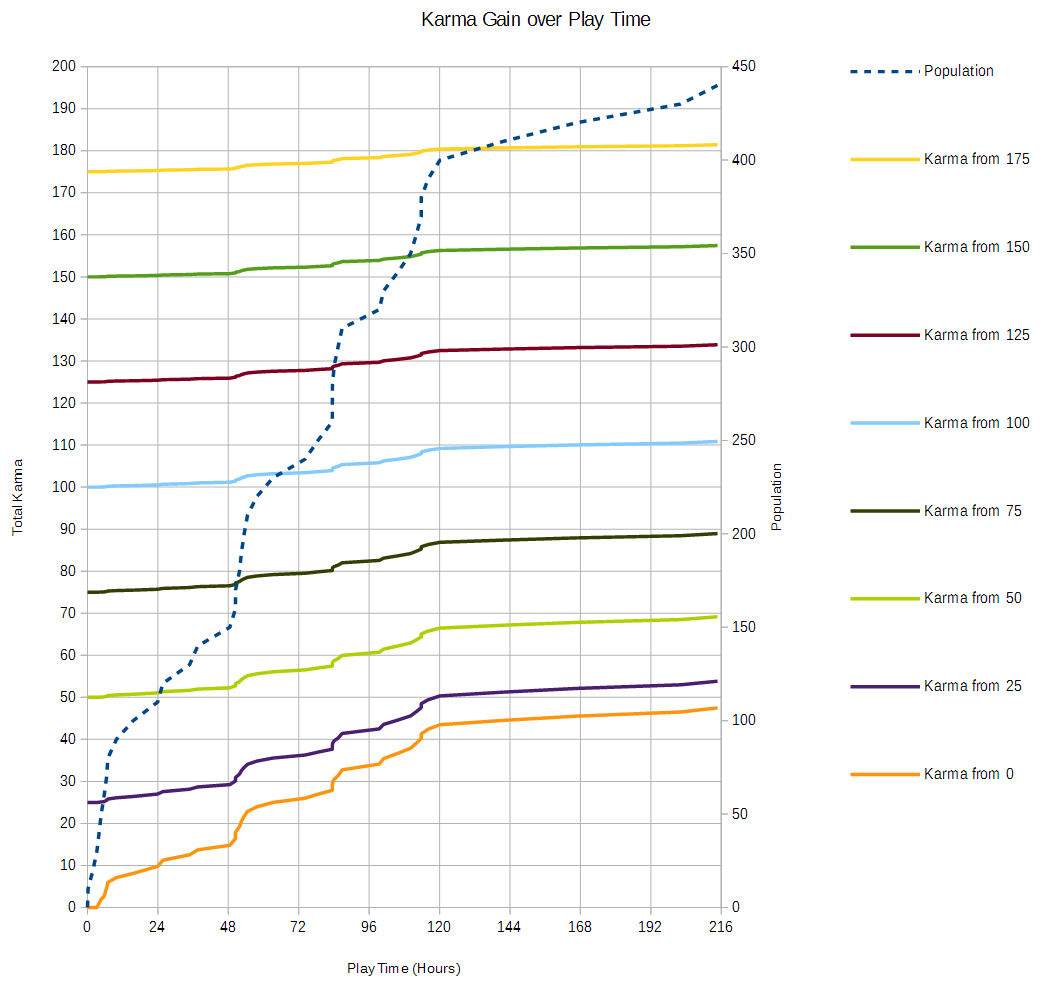 18
Is it possible to stop the consumption of rare resources?
8
When to reset to maximise karma and paragon?