How do you pick a lock successfully?

In Fallout 4 what's the best tips for lock-picking so I don't break hairpins? 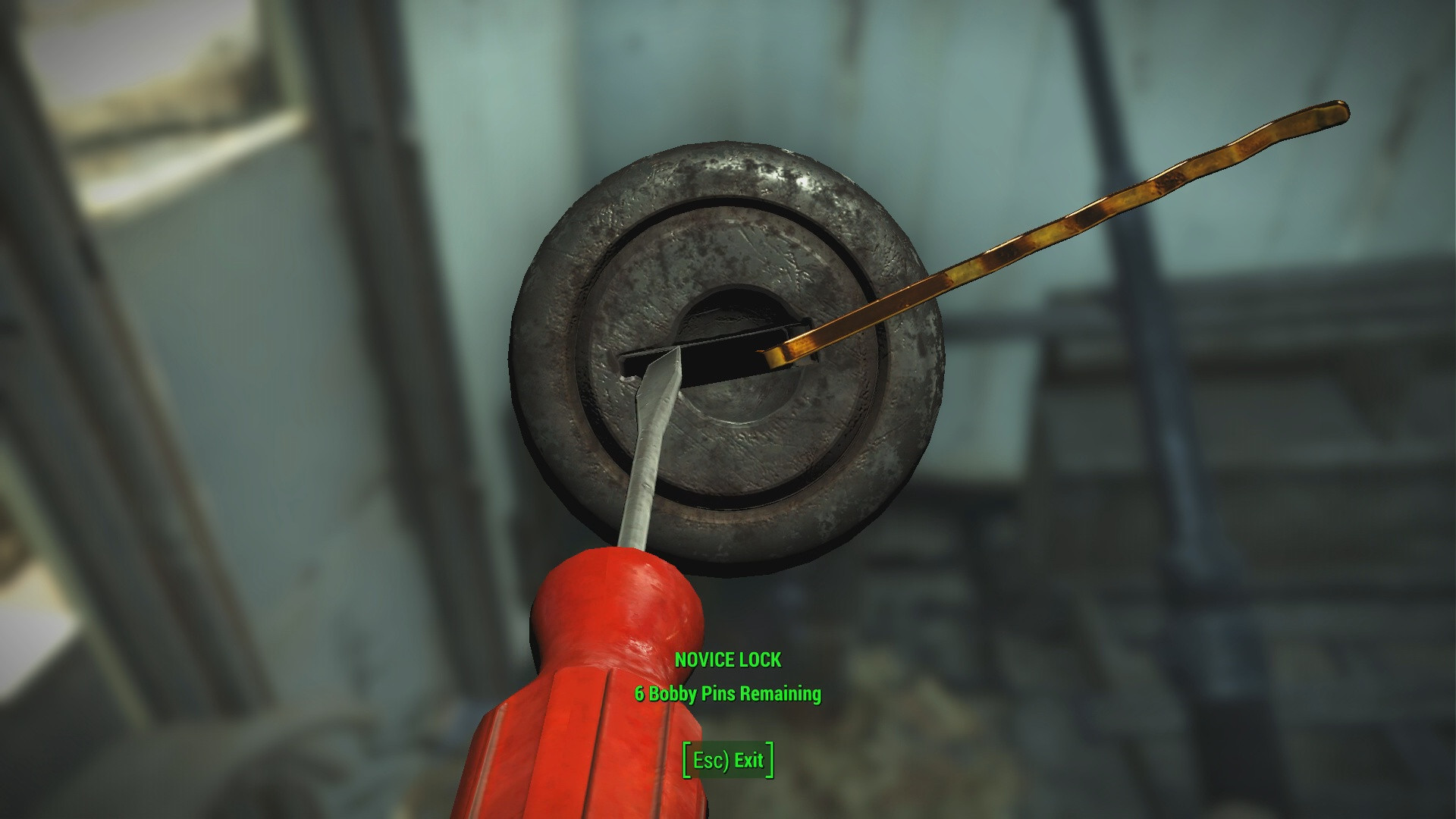 Immediately stop putting any pressure on the bobby pin as soon as it starts to stick. This will allow it to stick in multiple spots before it breaks.

Remembering where your last pick was when it broke is easier if you pay attention to where it is in relation to the little chips and marks around the outside edge of the lock before you start turning it.

As far as figuring out where to turn the knob, use a modified binary search algorithm. A binary search is the same algorithm children are taught in school when they learn how to use a dictionary. This one is a bit different, as we have to test a couple points and compare before going left or right.

In these instructions, "test the point" means to turn the lockpick there and see how far it goes.

The width of the section that will turn at all gets narrower as the locks become more difficult. As you attempt more locks you'll get a better feel for how wide each type of lock's sweet spot is.

If one of your test points turns far enough, you might not even want to bother testing the other point, as you can be confident you're on the correct side already.

Occassionally, neither the center point nor either test point will turn at all. This complicates things. You'll simply have to try more test points until one of them turns at least a little. Once this happens, you can use this as your center point and the nearest spots you tried on either side of it as your endpoints.

A normal binary search is done on a set of ordered elements, usually numbers. This search is also done on an ordered set of points, but when we're running the search we're unable to directly read the value to determine if it is greater than or less than the target value. Instead, we can only determine the distance (absolute value of the difference) between the test point value and the target point value. To be clear, I'm referring to how far the pick turns. When it turns a little, you're far away, when it turns a lot, you're close.

Since distance is undirected, we don't actually know whether to go left or right after the test. This means we check both left and right, then compare to determine on which subset of the set we recur. Because our center test point is not the target point (if it were we'd be done already), we know that when comparing two equidistant points on either side, one of them must be closer to the target than the other. This necessarily implies that the target point is to that side of the center point, although it doesn't tell us which side of the test point we need to check.

So we recur and repeat.

If you look carefully at the lock, there are lots of "landmarks."

So start in the middle and if it doesn't turn, then half-way clockwise/halfway counter-clockwise until the lock starts to turn. Once you see the lock turn a little you are "close."

From then on, make a note of where the edge of the bobby pin is in relation to any markings on the lock. If you still haven't got it, reposition the bobby pin a little in either direction from the marking and try again.

For Novice locks, you can move the bobby pin more freely between tries, but for the harder locks, the marking positions are more important

DCShannon has a good and thorough procedure, but it seems to understate some of the opportunities for optimization.

Firstly, once you've found a point that moves at all (well, more than just a teeny-tiny jiggle) you need to stop swinging all over the lock's face. You've found a good starting point. No matter how little it moves, you shouldn't go too far away from it for your next check.

Secondly, every point that you check afterwards is telling you something. You don't need to test two more points every time (not even nearly most of the time) to figure out where to go. If a spot moves further than the spot before it did, you're probably headed in the right direction - go just a few degrees further in the same direction and try again. Rinse and repeat until you either unlock the thing or you find a spot that moves less than the one before it.

If you find a spot that moves less than the spot before it, then one of two things happened:

It's hard to give guidance for this that will be both efficient and universally applicable. But keep in mind what I said earlier - every point you check is telling you something. Consider how the lock has responded thus far, and you should be able to logically conclude what the appropriate course is for now. In any case, you definitely need to reverse direction. The question you'll need to work out for yourself is just how far. Work in small increments at this stage, and the lock will tell you soon enough.

As for where to start the whole process, I find the following points (in this order) tend to be the most productive:

Nine times out of ten, one of those points will respond favorably to some degree - usually, it's one of the first three. On the off chance they don't, just start poking around in between them until something does.

8
What's the purpose of sitting down in Fallout 4?
15
Is it possible to create your own ammo?
5
Cryolater without being a master lockpick
8
How do you Swim?
9
How do I change turret targeting parameters?
19
What are the likes and dislikes of the companions?
7
Why do I have blurred vision and how do I fix it?
7
What's the highest possible amount of free Carry Capacity?
2
How do you turn on your own faction?
1
How does a Combat Rifle beat a Sniper Rifle? Does the Marksman perk increase sniper rifle damage?