How do make the soldiers change uniform?

Okay so as I've progressed in my game, like it told me the soldiers would adapt to my gameplay.

Im around mission 40 odd and not killed anyone other than skulls, I even fulton out main objective soldiers instead of killing them.

So I tranquilize everyone with headshots and use Quiet as my buddy in every mission.

Then soldiers started wearung helmets so I used Quiet and the stun shotgun which basically fires bean bag pellets and well stuns them.

Now they are mostly wearing heavy juggernaut armour so it takes 2-3 shotgun pellets. CQC was my next step.

Now I have heavy juggernauts with riot shields.

I know its meant to be difficult but is there a gameplay style I can go with for a while that will make them change their attire?

I would still like to be able to fulton out most soliders and stun or tranquilize them.

Although if needed I could go a few missions without making contact with any soldiers if that would help?

In the missions tab, under Combat Deployment, you can send teams out on missions to destroy enemy storage sheds and ambush equipment transports.

This will lower the levels of the equipment the enemy soldiers are using, so you won't have to alter your play style. 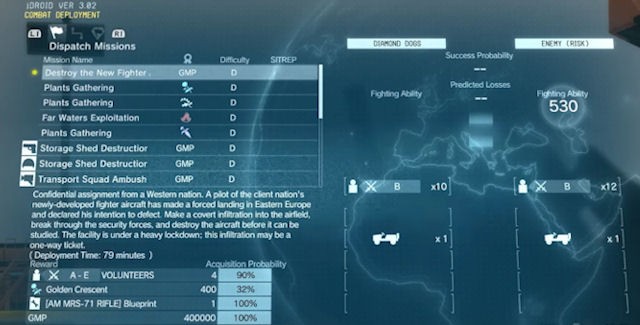 Not the answer you're looking for? Browse other questions tagged metal-gear-solid-5-the-phantom-pain .

0
How do I send my soldiers out on missions?
9
How can I recruit the most skilled soldiers?
6
How do I make my soldiers better?
7
How do I Fulton child soldiers?
3
How long do stunned soldiers stay unconscious?
7
When the FOB is past full capacity, how are soldiers chosen to be dismissed?
6
Replacing soldiers with unique skills
5
How do I get S+ or better soldiers?
5
Which weapons can take out guards in riot suits with helmets in one shot?