What does a + next to the name of a piece of equipment represent when looting?

In my gallivanting around the Bostonian suburbs, I have slain many raiders, and verily, I have Taken Their Stuff as is my right and will. I've noticed that sometimes, when looking at Their Stuff to determine whether it is worthy of being taken, their weapons or armor will sometimes be appended with a + sign. As in "Raider Left Leg +" or "Bolt-Action Pipe Rifle +".

These items don't appear to be upgraded versions, as that would be reflected in the name. They stack with all of my other raider armor and pipe rifles and what have you as if they are no different.

So what gives? What does the + mean?

It means that the item is "better"*

So I killed a bunch of raiders and they dropped me some loot: 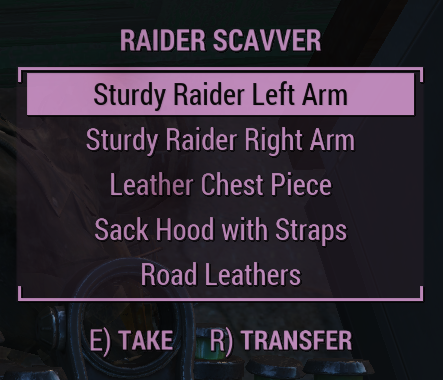 But before picking it up and after taking the screenshot, I took off all of my armor and stood naked in the street to do a comparison: 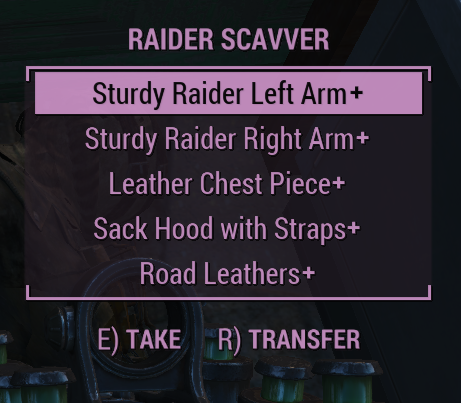 Now, from my testing it doesn't seem as clear as this and you can find instances where this will tell you an item is better when in fact it isn't but this symbol is intended to indicate that the item you're looking at is better than the one you already have equipped. Here is an example:

That gun I'm holding in the background is a Big Boy. It does an unreasonable 486 damage in comparison to the Combat Rifle (which the game tells me is better) which does 34, however the Combat Rifle is better in every other statistic (except Value) and thus with a much higher rate of fire it does more damage per second on a single target, not taking into consideration the massive area of effect the Big Boy causes - the game believes it to be a "better" weapon.

Such examples are mainly context based or class based, for example comparing a pistol to a sniper rifle or comparing power armor to regular armor or looking at armor that provides a damage resistance bonus over your current gear when you're wearing a radiation suit and chilling out with the Children of Atom.

Personally I'd take the plus as indication the item is worth a look at in comparison to what you currently have but that in some instances you'll find that your current item is better for how you're playing (whether that's an item specific perk or comparing different weapons classes or whatever...)

11
What does “tracks targets” mean in the description of recon scopes?
38
What determines when a location is 'CLEARED' on the map?
18
What are those brackets around the words “Hidden”, “Caution”, and “Danger” when you sneak?
1
What happens if you use the 'you are special' book when all of your stats are at 10?
12
What unit does the radiation indicator show?
7
What exactly does the luck stat do?
19
What exactly does the Covert Operations perk provide?
4
How to defend a settlement against charred feral ghouls?
6
What do companions look for when looting corpses?
6
What happens when you unlock all the perks?