What problem do my settlers have with beds?

While I was browsing my shops in Sanctuary, I heard one of my settlers mention a "bed problem". When I asked my barman if there was any problem around the settlement, he also talked about the "bed problem", and how it "puts everyone on edge".

I have currently 12 settlers and 17 beds in Sanctuary, so it's not like they have to share a bed or something, yet they still don't seem very happy with their beds.

What seems to be the problem is that you haven't assigned the beds to anyone, which makes someone wanting a bed to rest look for the closest one and if it is occupied already, makes that person unhappy.

This is based on those 2 threads I found talking about the same problem and that the solution was to assign the beds.

So I took the time to put it to where I had exactly 20 beds, and then assigned each person a bed that night. It's been a couple days in game, and they haven't complained since.

I've had some issues with beds as well. My latest problem was fixed by manually assigning everyone beds in the workshop mode (hit E on settler, then E on bed). Maybe try that.

I'd placed beds in every house in Sanctuary at the start of the game, thinking people might use them eventually so why not. But the settlers picked random beds all over the town, and something about that situation was making them unhappy. So I consolidated the beds into the houses in the center of town, made a town bell to gather my settlers, assigned them all to nearby beds, and put the unused ones into storage.

I don't think the bed actually has to be reachable for the settler. I was delighted when I found that Greygarden build area actually included a chunk of the overpass above - thought it would be a nice, safe place for people to sleep. NPCs never climb the stairs and generally stand around the workshop all night.Beds show they are assigned, and all NPCs are happy.

At Abernathy's, however, people have complained, and I've had to assign beds. I didn't exactly sign up with the Minutemen for parenting some bums.

One thing I found is that NPCs will not step over another sleeping NPC, so don't put beds too close.

I don't think the accepted answer is right, I think the game simply has a bug. It might sometimes be corrected by assigning settlers to specific beds, or storing and re-placing all the beds, but it's still a bug.

I have 18 settlers in Sanctuary and they were complaining even though I had 23 beds (all under roofs, all accessible).

I went through every house and stored all the un-assigned beds in the workshop ... and now I have 19 beds. I've counted it three times, I have 19 assigned beds, but 18 settlers (and one of them is Codsworth, who shouldn't even need a bed, but he does).

So if my settlement can have 19 assigned beds for 18 settlers, something is wrong. It doesn't explain why they were complaining even when there were another four free beds, but hey, it's a bug, who knows what the game's logic is doing.

Edit: I wonder if it's related to the fact that my pip-boy keeps telling me I have a bed shortage, when I still have 20+ beds: 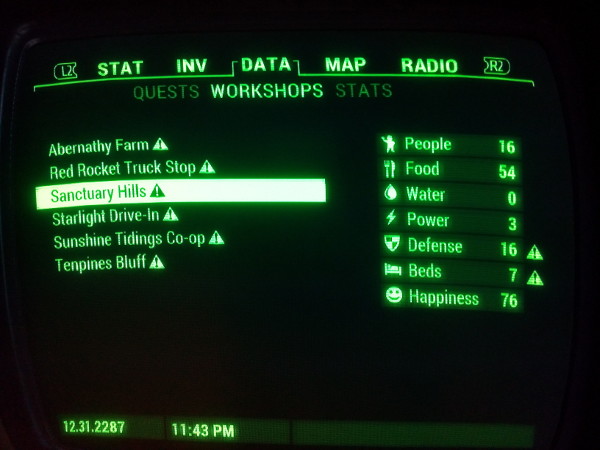 i fixed this problem by adding flooring and making paths to areas that werent even. i noticed a lot of settlers getting stuck between a wall and a bush, or werent able to climb up a hill or something... making sure there were no obstacles between where the settlers work/congregate and their beds... the complaints stopped

I saw a comment in an article a few days ago that having more than 4 beds on one floor will make settlers unhappy. Haven't really tested it out myself, mostly because I don't want to put that many beds in one area anyway.

6
How can I have 22 settlers?
4
Fallout 4 settlers suddenly aggro
14
How do I stop Brahmins from coming into my structures in Fallout 4?
10
What bonuses do beds give in Survival mode?
18
Do settlers need ammunition?
6
For survival mode, did they add more beds?
8
Can settlers wear power armor?
5
Does Greygarden need beds for happiness?