How do I prevent my champion from attacking minions that are in range?

In my attempt to get better at last hitting, I have found my main difficulty is that when using ranged characters, they'll attack the minions if they're within range even without direction.

I want to stand within range of the minions so that I can attack them quickly when they get low, but I don't want to get caught in the middle of attacking the wrong minion and I don't want to push too hard with lots of extra early damage.

I've tried right clicking a bunch to walk around in a tight circle, but that gets tedious and my fingers get tired very quickly doing that.

How can I prevent my hero from attacking enemy minions until I direct him to?

There is a hotkey H which is the equivalent of toggling "Stop", which stops your current action. I'm not sure whether this will do what you need in stopping the auto-attack, but it's worth a try. I don't see any other options that could remotely do what you desire, other than getting stunned.

Continually pacing back and forth within range is a preferable course of action once you learn how to do it without getting exhausted. This actually has a few benefits besides just preventing you from attacking - it makes you a harder target, and it also makes it less detectable to be seen creeping closer and closer towards your opponent to make a pot shot. Alternatively, it makes your opponent uneasy since you can easily be in range to take said shot, which makes them less inclined to stay close.

While there are hotkeys for "stopping" my recommendation would be to keep moving.

I tend to move around a lot, not in a circle but in a sweeping arc being my minions. The trick is to simultaneously threaten all (or at least the low health minions) while making yourself a moving target. I have found that standing still is a good way to catch enemy attacks and spells in the teeth. For example: Lux's spells aren't particularly fast so you can dodge them when she is trying to lead you and you hear, or see, her start to cast. However, if you are standing still it will be much more difficult to get out of the way and you will end up taking damage. The caveat to this constant movement is that you don't want to become stale and predictable simply running in a arc behind your minions. Be mobile but be fluid in your movements, reacting to the enemy advances and note the strength of your minion wave taking advantage of your range to harass enemies in addition to last hitting. 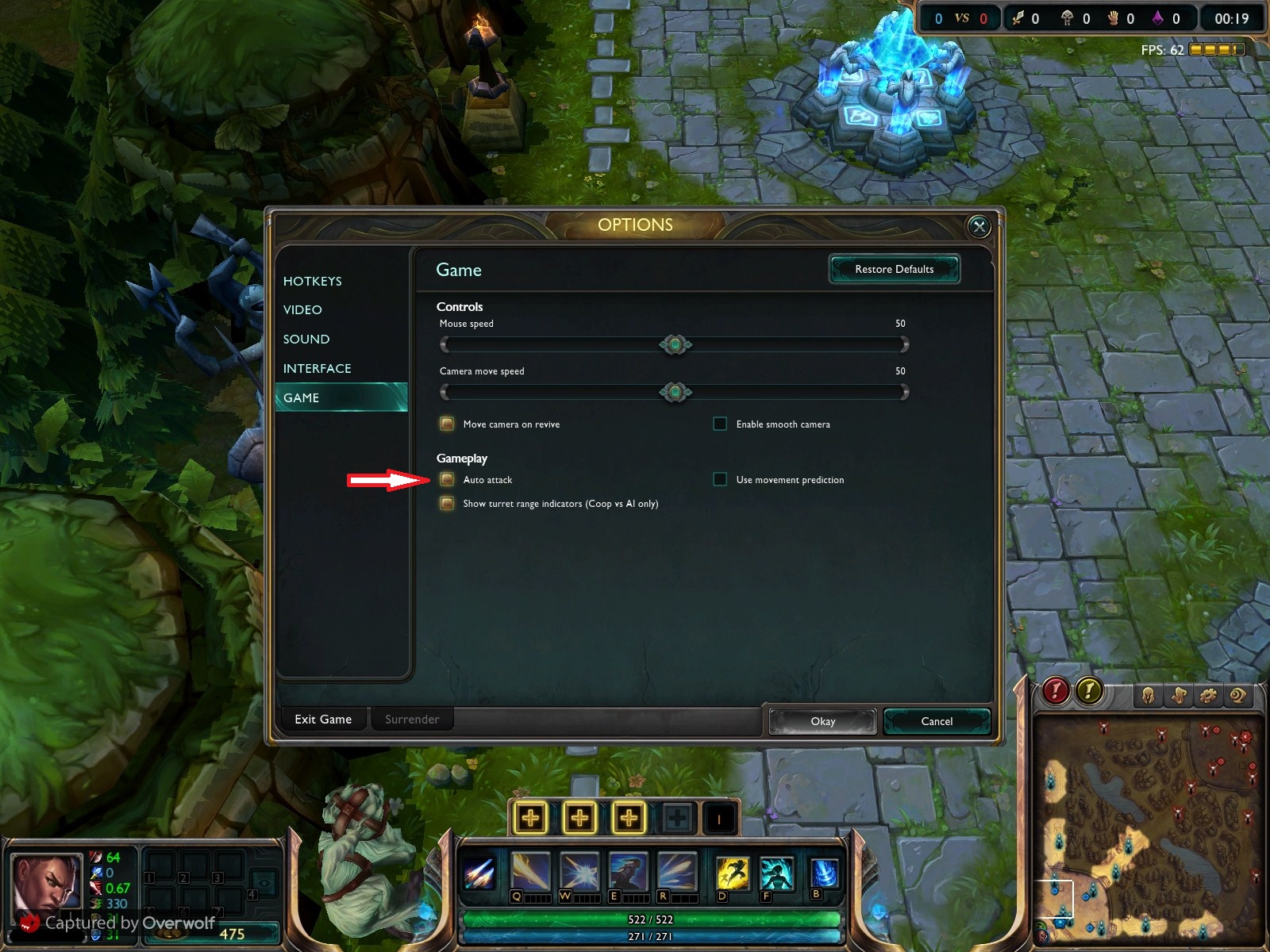 Apart from all that has been said there is one automatic feature riot introduced this year. While in game simply navigate to you're menu (esc key) and go to game then game play and deselect auto-attack this will basically stop you from auto-attack all auto attack command will have to be specified by you the user. Even if you are being attacked by an enemy champion and for whatever reason you are not looking at the screen you're champion will never attack. However I feel its far better to just press and hold the S key this stops you're champion from doing anything until you give it a command or you release the key

There is also now an option "Auto-acquire target" which you can disable and you will not attack when not issuing any commands.

you can just press "s", then it stops attacking, useful when giving away buffs as a jungler too

They actually added an option to stop autoattacks. It is labeled as such under gameplay in the options menu.

Also, they added the option to make the camera not snap back on recall/spawn. Very useful for global ults.

3
Do promoted siege-minions intercept champion-targeted projectiles?
6
How to counter a champion with a long range/harass?
3
Would it be viable to run an AP champ in bottom lane with a support and put your ranged AD carry in mid?
6
How are champion stats calculated?
3
Melee champion attack range?
6
Dealing with point and click harass
9
Understanding last hitting and freezing a lane
8
Does buffing grant you Turret assists?
5
How to lane against Gnar as a melee champion?
22
Why do high level/professional junglers seem to 'kite'?