How do I find a lost ship in my fleet?

I lost a ship in my fleet - how do I find it again?

You need to View Player Info (default key is I). That brings you to the following screen: 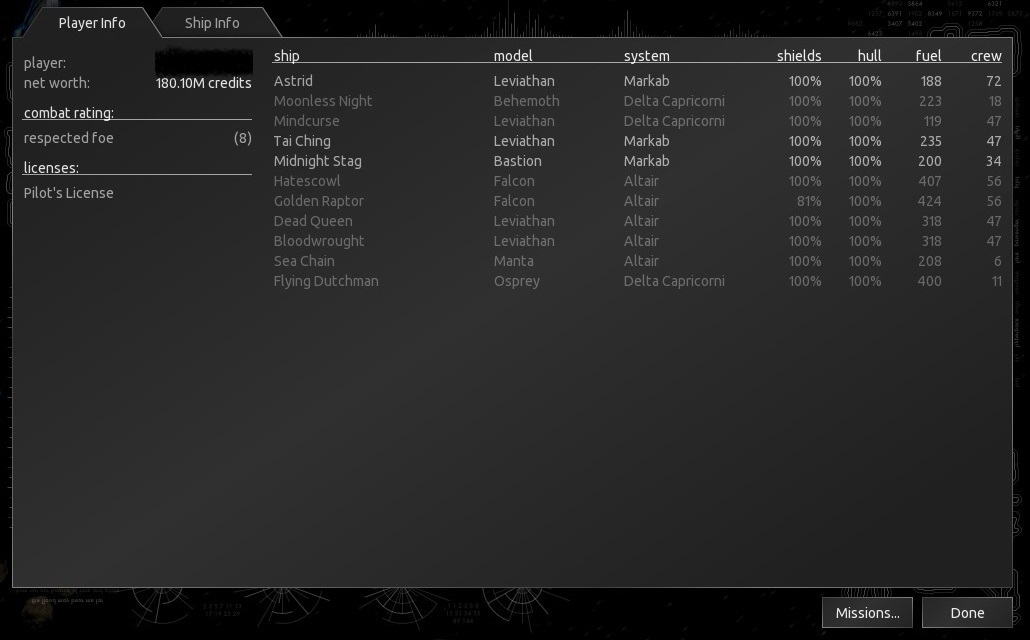 This shows a list of all your ships and their current system, among other things. You'll find your ship there.

In the above image, my ship Astrid is in the Markab system. I recently told my escorts to "Hold" in the Altair system, then told them to "Gather around me". I took the screenshot as they started to come to meet me.

Escorts are pretty intelligent, and there are several behaviors they can follow, depending on what commands they were last given by you. The two main ones are these:

You can also "Park" escorts on a planet if you want them to not travel with you.

If an escort is trying to get to you, they will slowly jump their way to you. If they don't have enough fuel to make it to the next system, they will try to land on a planet in their current system to refuel. If they are in an uninhabited system with no ports, then they will try to flag a virtual passing ship in that system for help.

Rather than travelling to your escort, you might just want to order them to come to you! (Of course, this won't work if they are disabled.)

Not the answer you're looking for? Browse other questions tagged endless-sky or ask your own question.

2
What affects your credit score in Endless Sky?
2
What do the colors in a jump-path indicate?
1
How to join the Free Worlds?
0
How can I go to those systems without hyperspace links?
1
How to dominate planets/moons/stations? How do I know if I have dominated it?
1
I dominated a planet/moon/station but their ships are still hostile to me. How to fix it?