Is the hunting rifle the possibly strongest ballistic weapon?

As a Sniper, I wonder which base-weapon is the best. I wanna shoot normal projectiles and get the most out of it using modifications.

I found this page on the wikia, which tells me that the Hunting Rifle is the way to go. Is this even true after applying all mods to a weapon?

PS: My main interests are:

If you're aiming for the highest damage per bullet, you should have a look at the Railway Rifle. It starts out with considerably higher damage unmodded in comparison to the Hunting Rifle.

However, you might feel it has a very "un-snipery" feel to it because it does not look in the slightest like a weapon made for sniping in the usual sense. In that case, yes, the Hunting Rifle is your best bet. I had no raw one at hand, so here are the fully modded stats of a Lucky Hunting Rifle with all damage and sniping components: 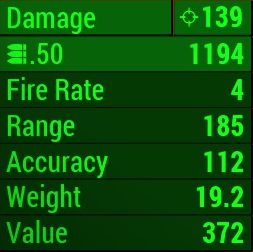 I would look thoroughly for a rifle with a good legendary mod though, seeing as 139 damage is pretty meagre in higher difficulties. Aim for one of these: (somewhat in order of expected payoff)

Ammunition did not pose a problem for me. As you can see on the screencap, I have ~1200 shots. Another 1500 are on Nick because I gave him a similar weapon. A clip for the best magazine mod holds 10 bullets if I'm not mistaken, with which, when looking at the Fire Rate, it generally takes FOREVER to deplete 1000+ rounds.

Also, if you pick up the Scrounger perk (additional ammo found throughout the world), you will find boat loads of .50 ammo. This stuff is everywhere and I have absolutely no use for it. Maybe it's just a troll and you'll find plasma cells when you're using that Hunting Rifle, who knows...

The Gauss Rifle not only has the highest damage of any weapon save the Fat Man and variants, but can be mounted with a silencer and every scope in the game. It's a little heavy at 15 FWU, and the ammo is relatively rare, but nothing beats it for long distance, precision damage. The biggest wrinkle is getting used to the charge time.

The Railway Rifle does considerably more damage than any of the other rifles.

However it can't be silenced and it weighs quite a lot.

The ammo can be quite scarce, however they are cheap to buy and can be recovered from enemies killed using this weapon.

5
What is the difference in melee weapon speeds in Fallout 4?
3
Where can I find a plasma rifle/pistol in the Commonwealth?
7
Which non-energy weapon modifications require the "Science!" perk?
2
Where can I get ammo for the weapon "Nuke"?
13
.50 Cal Hunting Rifle doing WAY more damage than other guns?
2
What Is The Best Weapon (Base Damage Stat)?
4
Is it possible to obtain the Ballistic Weave mod in Fallout 4 without hitting a point of no return?
7
What perks apply to the Syringer Rifle in Fallout 4?
8
Is there any way to get the combat rifle very early in Fallout 4?
1
How does a Combat Rifle beat a Sniper Rifle? Does the Marksman perk increase sniper rifle damage?