Getting over the “unlock hump” on the Moon

My progression on Earth and Mars is going quite smoothly...I am able to double up on Angels in quite a reasonable amount of time. Unfortunately I can't say the same about the Moon. I'm having a real hard time getting over the "unlock hump", as I call it. Most of my investments have an insane multiplier for their next unlock, but along with that require a crazy number of investments. Screenshots below for reference.

The problem is that I still have a lot of investments to go to unlock anything new, but my income rate is making development glacial. I'm having to pay in the sexvigintillions and up for new investments, but my best investments are only earning quinvigintillions. I already have quite a few angels (in the undecillions, see final screenshot), but it's also taking forever to "double up" on them. Upgrades are also a long ways away, and wouldn't help much anyways. So I'm not sure how to proceed.

Is the Moon supposed to be this hard, or am I missing something? It seems odd, considering that Mars is going quite well for me. I've considered purchasing another golden ticket, but I'm not sure what I would put it on, or if it would even really help... 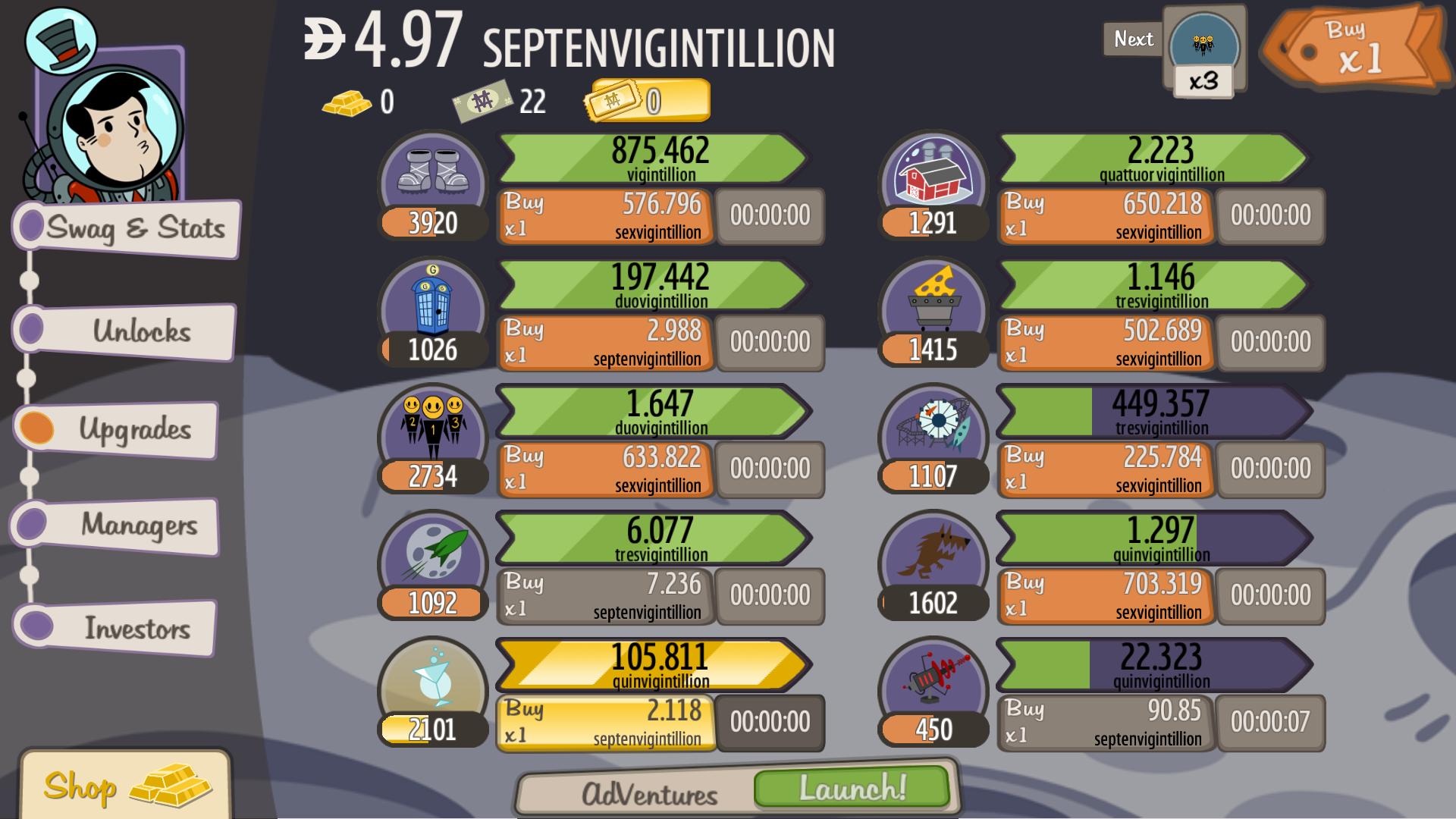 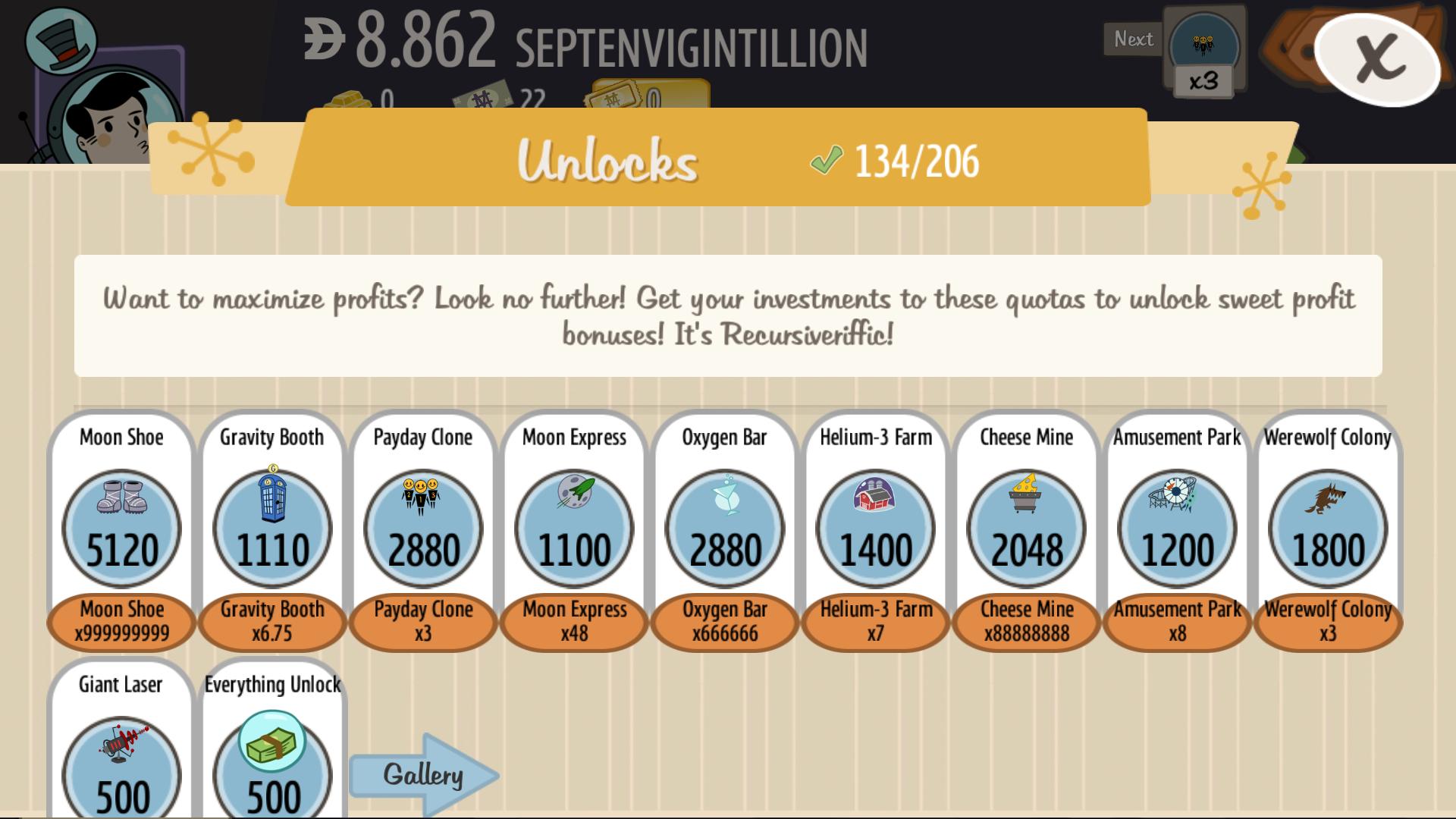 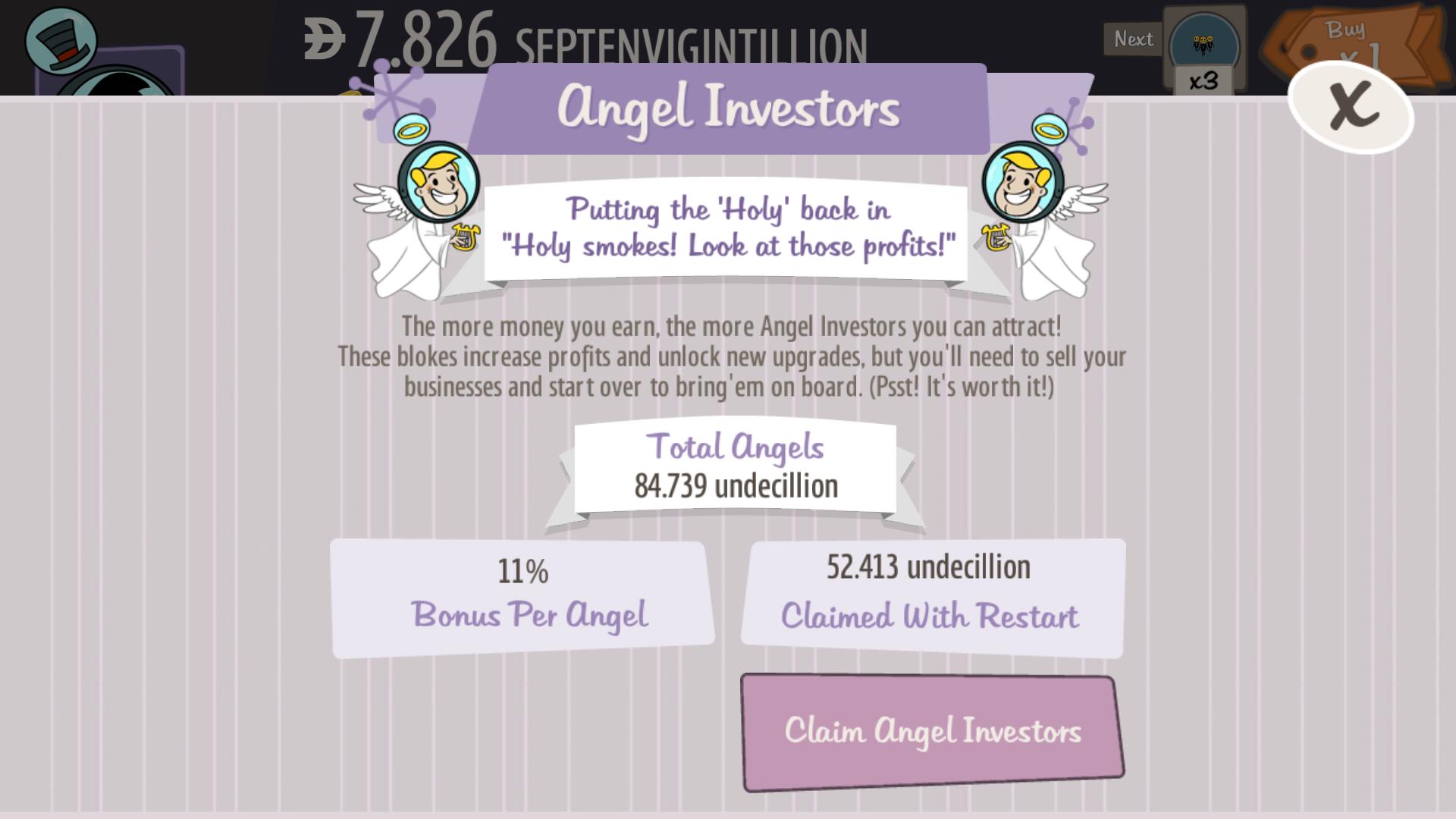 I tend to use the Moon Guide that someone posted on Steam. There are many graphs on Earth, Moon, and Mars showing the profit gains. Here's the guide for the Moon: https://steamcommunity.com/sharedfiles/filedetails/?id=443045440

It's very lengthy, but here's the first part that gives a brief strategy without going into specifics.

This strategy works by making you hit milestones which multiply the profit gained from businesses. What follows is a brief list of things you should aim for, followed by a lengthier explanation which tries to be a bit more elaborate, especially if you are stuck at certain parts. The list only contains business-specific milestones. You should purchase upgrades on your own. For the "x of everything" milestones, check out the table below.

Reach the following investment quantities in that order:

So that's very basic milestones you should aim for, but the guide is very in-depth if you want to learn strategies for overcoming that hump we all hit on the moon.

It really was as simple has getting tier 2 platinum on moon. Hump demolished.

I would also recommend that you accelerate your investor collection ahead of the typically recommended 2x existing. The investor ticker just crawls at this point too, but I've found I can get back to where I was and then some by claiming regularly when the number of new investors is 50-100% of my current pool.

I'm still in the slog right now, but it FEELS like I'm making some progress... Sometimes that's important, too. :D

If your game seems stuck and you collected more angels than you have already, try reseting the game, as you could get to the same place where you are fairly quickly.

Since you've spare Mega Dollars, consider buying Mega Tickets and upgrade some of the most profitable investments (such as laser investment).

Not the answer you're looking for? Browse other questions tagged adventure-capitalist or ask your own question.

6
How do the upgrades work?
3
How can I unlock the great adventure achievement?
3
What happens on the moon launch?
6
What is the purpose of Mega Bucks?
4
Can you switch between Earth and the moon without launching and restarting again?
2
What produces the most money?
5
When should I use the negative milestone unlocks?
1
How does the store credit work?
0
What’s the price scaling for businesses?