I just got an iCade -- it is technically for an Apple iPad, but it is basically a generic bluetooth keyboard arcade controller. 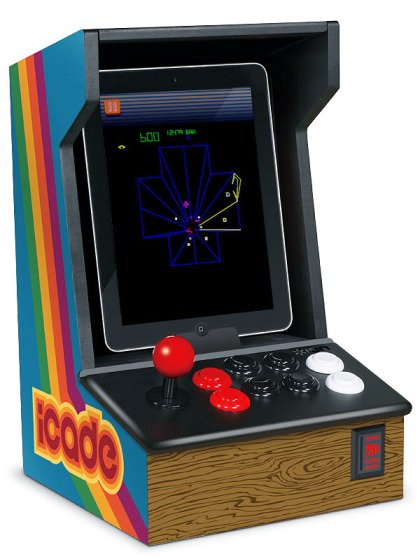 It's great! But once I paired it with my laptop as a bluetooth keyboard for testing, I discovered something odd that does not bode well for using the iCade with MAME. All inputs show up as two (and only two) keypresses – one key when pushed down, and another key when released. Like so:

Most MAME emulators expect standard keyboard behavior. That is, when you are pressing left you hold down left the entire duration of the movement.

This isn't a big deal for the buttons -- buttons are instant activate so if I pressed y on my keyboard that is the same as, say, pressing fire in Galaxian.

But it makes the joystick a non starter since the keyboard key is not "held down" -- that is, when I use the joystick and press ← one a is sent.. ever. But when I stop holding down ← q is sent.

Unfortunately, this strange operation is a hack to support iOS due to limited API support for external hardware. Currently, the iOS SDK does not expose the internal UIEvents for keydown / keyup messages, so ION send two keypresses to allow developers to determine state transitions for emulators and games. Essentially a keydown/keyup when you press a button and then a second keydown/keyup when you release the button. This is not standard keyboard operation, as you have discovered.

I am willing to bet there is a combination of buttons that would change the iCade to behave like a regular keyboard, and I bid anyone good luck figuring that out! Other controllers, like the iControlPad have multiple operating modes, which is why I suspect the iCade is similar.

I created and released an MIT licensed SDK for iCade last night, but I doubt you are running this on an iPad.

I looked in to the source of MAME and, unfortunately, it does not appear to be supported, it looks like the iCade guys were the first to think of it after all. I see two options:

Option 2 is the easier solution, here is my stab at it using AutoHotKey:

here is a pre-setup config file, just drop this in your ctrlr folder with the name icade.cfg and launch MAME with the switch -ctrlr icade

Not the answer you're looking for? Browse other questions tagged emulation keyboard mame .

2
ION iCade with Mame on a PC
4
Does JOYSTICK-IT work with MAME on PC?

3
ZBoard keyboard for PC?
2
What is the best keyboard button setting you use to run fast in Assassin's Creed?
5
Recommendations for switching for a long-time Keyboard Turner
4
Does JOYSTICK-IT work with MAME on PC?
3
Can't run MAME 0.178. Freezing on "Initializing" screen
0
Xbox One S controller (via Bluetooth to Linux) isn't binding Start or Select in Nestopia
0
How to run Snes game on Mame via GUI with Mame recoqnizing different games as different machines?