Without mods, is it possible to filter items in hoppers/droppers/others?

I'm new to Minecraft, and finally out of my "build a log cabin and try not to die" phase. I just completed my second useful machine today, a dropper-vator from level 14, up to the top of a large(ish) tower I'm building. I googled the design, I don't know that I'd ever have figured it out on my own.

It feeds into an automated furnace (did come up with this on my own), so that I can send buckets of lava as fuel (either from my nether portal, or just lava pools). But I still have to bring the empty buckets back down for refilling.

Everything on the internet says there is no infinite lava (or I could just suck that up with a dispenser, I think)... so I'd like to make this as painless as possible. But buckets keep getting dumped in with the smelted ores, and I only want to bring buckets back down.

It occurs to me that I can arrange two (or maybe even three) dropper columns around the circuit column, so I can send fuel and ore up, while bringing buckets down... assuming I'm not sending all of my iron/gold back down with them.

Is there a fancy way of only choosing a particular item to be moved in one of the Minecraft doohickeys? I've tried searching and either come up with mods I have no interest in installing/playing, or a few comments from years ago hoping hoppers would eventually include that feature. I feel like it's obvious and I'm just not seeing?

To augment Slayner's answer, I've made a quick example in Minecraft. The way hoppers work is that they prioritize a hopper below drawing the item down over moving the item along in the direction the hopper is facing. So, in this picture, the items traveling along the hopper chain will be sucked into the one below. Note the middle hopper is not pointing down - this is important, as the items must be pulled by the bottom hopper rather than pushed by the top hopper. The bottom hopper thus controls the flow of items, being controlled by the redstone torch below it. 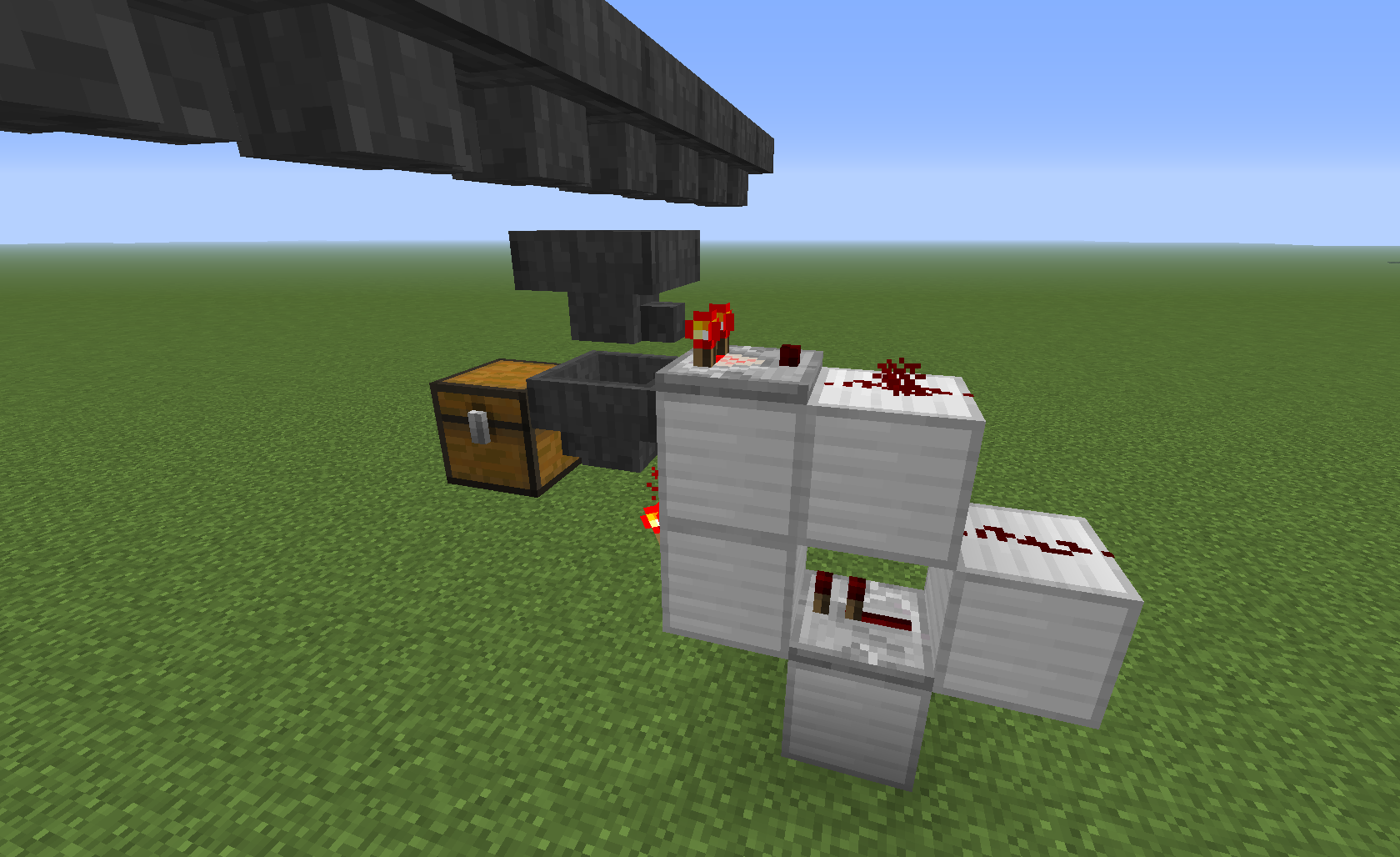 To filter items, you must have all the slots in the hopper below the chain filled with the item you want to filter. The redstone makes it so that the hopper will hold 22 items, and when a 23rd item goes in, it will release one to the lowest hopper and into the chest. 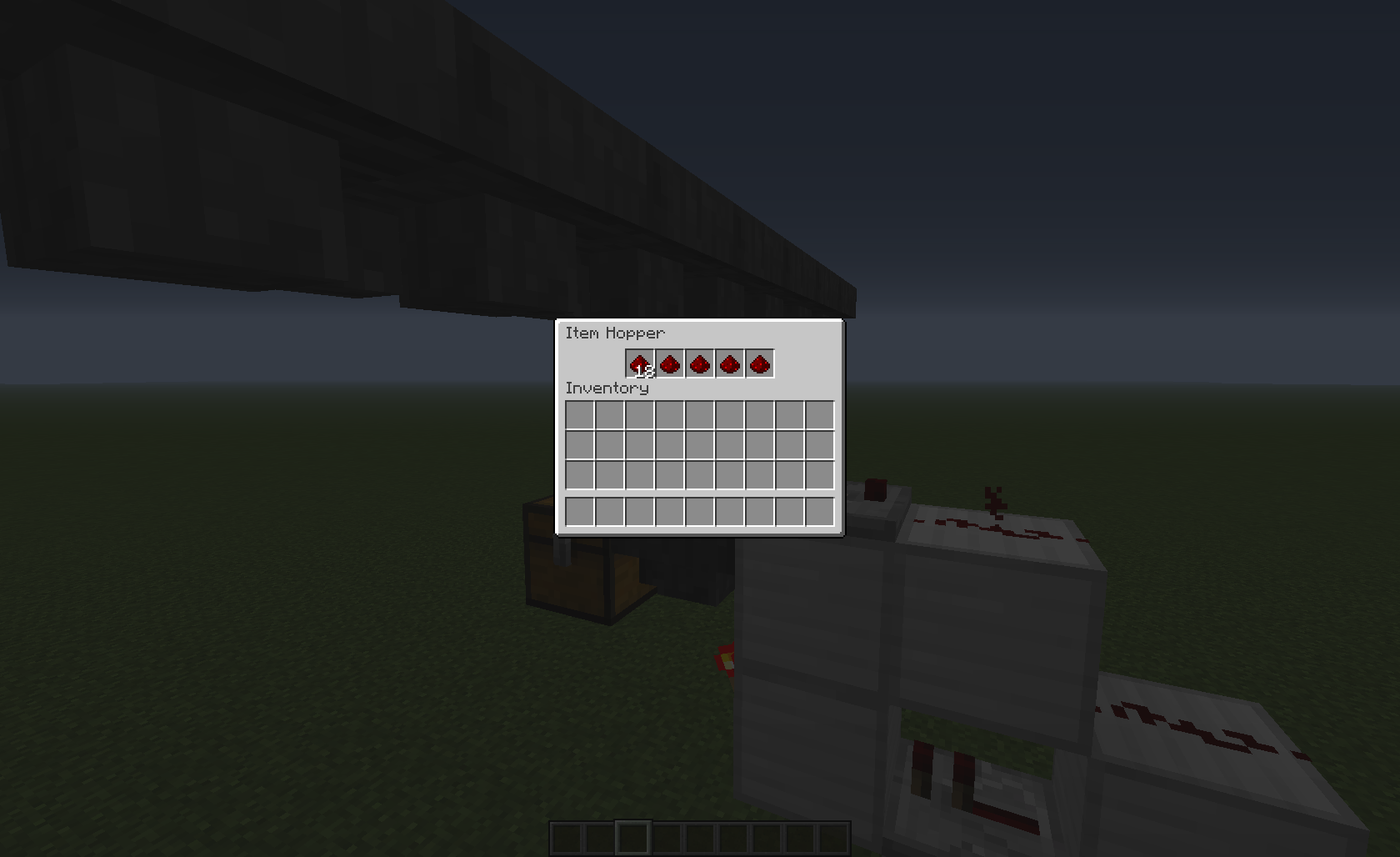 If you need to sort items that stack to 16, you will need to change the amount in the hopper, because comparitors work on fractions of stacks rather than pure number of items (this also means you cannot sort unstackable items this way). Just put one of the 16-per-stack items in each hopper slot, like so: 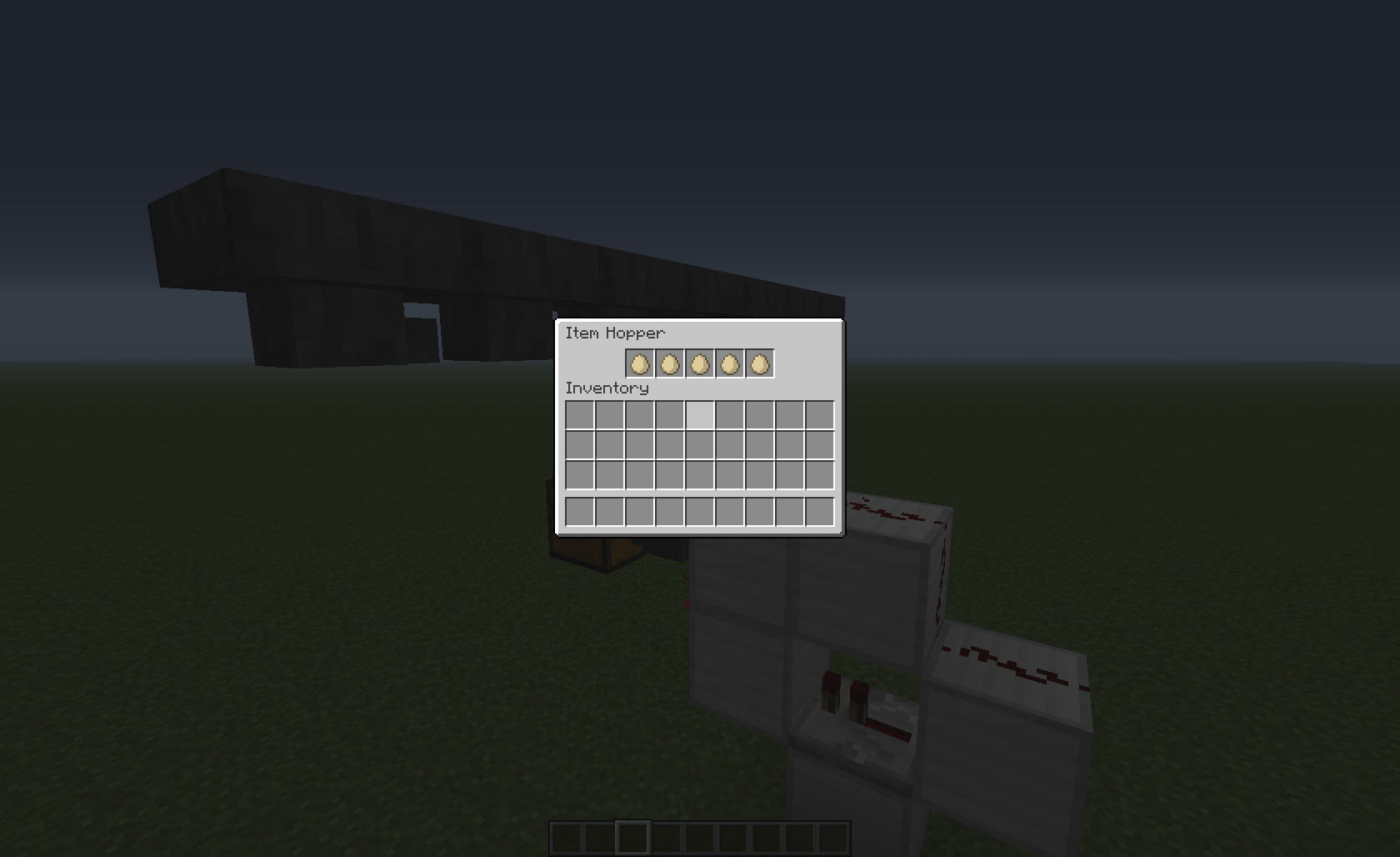 Note that only the leftmost slot need contain the actual item being filtered. Therefore, the others can be filled with a block/item that you know will never enter the system. Also, this means that you may use items that stack to 16 in the other four slots, to reduce the number of items needed in the hopper. Renamed items, or non-sorted items such as eggs or snowballs work well. For sorting items that stack to 64, you need 4 items plus 6 of the item you are sorting (will try to remember to add a picture when I get home from work).

This design is tileable, meaning it can be stacked horizontally with no space in between (alternating between trapped and regular chests if below 1.13). There are other designs, and more complicated ways of sorting items, but this is the most common.

My answer is only for augmenting his.

That kind of sorter works fine, at least until you produce too much. Yep, this happens.

When your pile of chests fills up to the top, the comparator starts to output a gradually stronger signal, up to its maximum when the hopper he is analyzing gets completely full. But far before this point, the system has already failed!

...when the comparator outputs a signal that's longer than two, it messes up the other filters as well, compromising all the sorting.

The most simple/efficient way to solve this problem, called "Overflow" is to slightly modify the configuration.

I'll show you how. 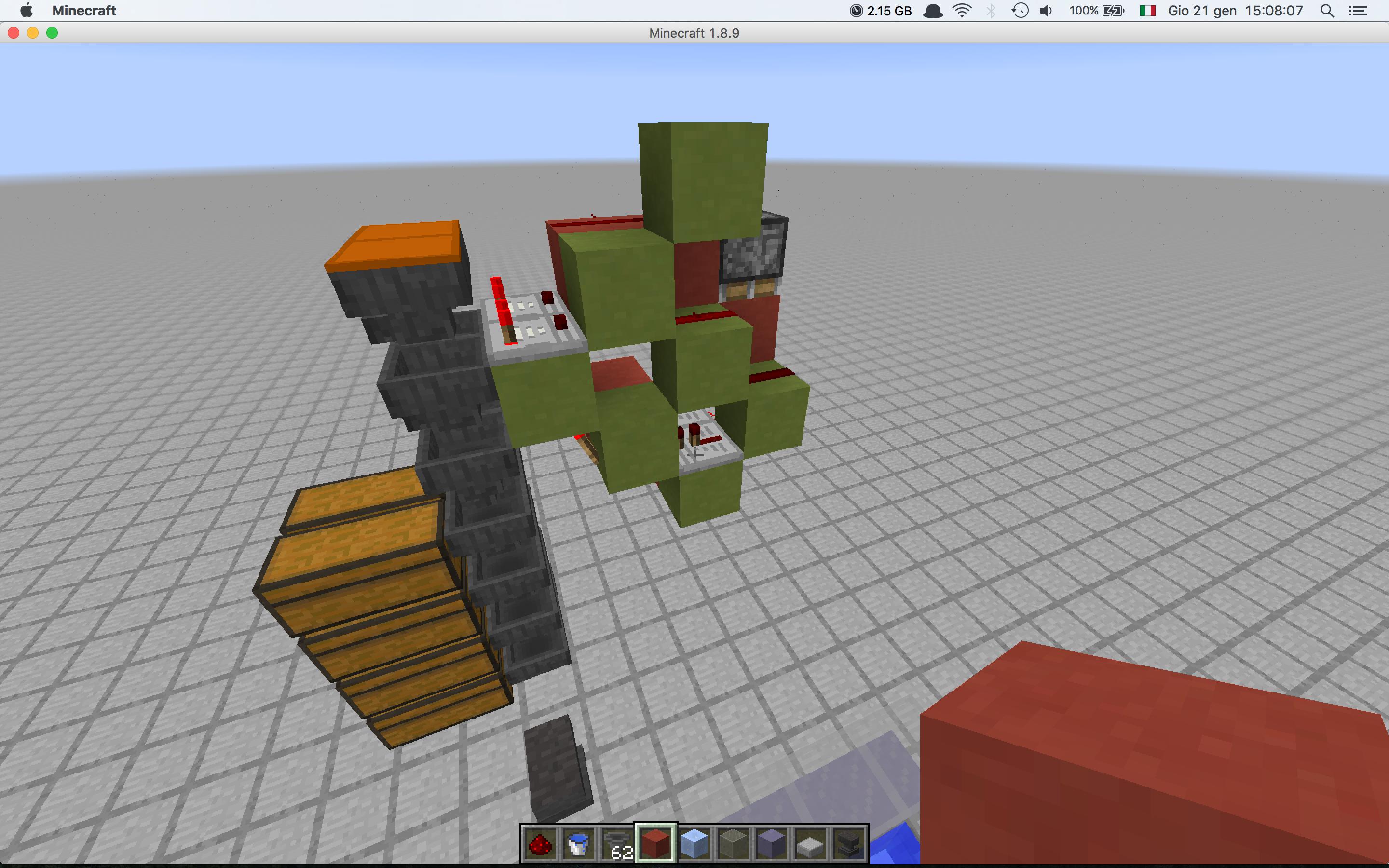 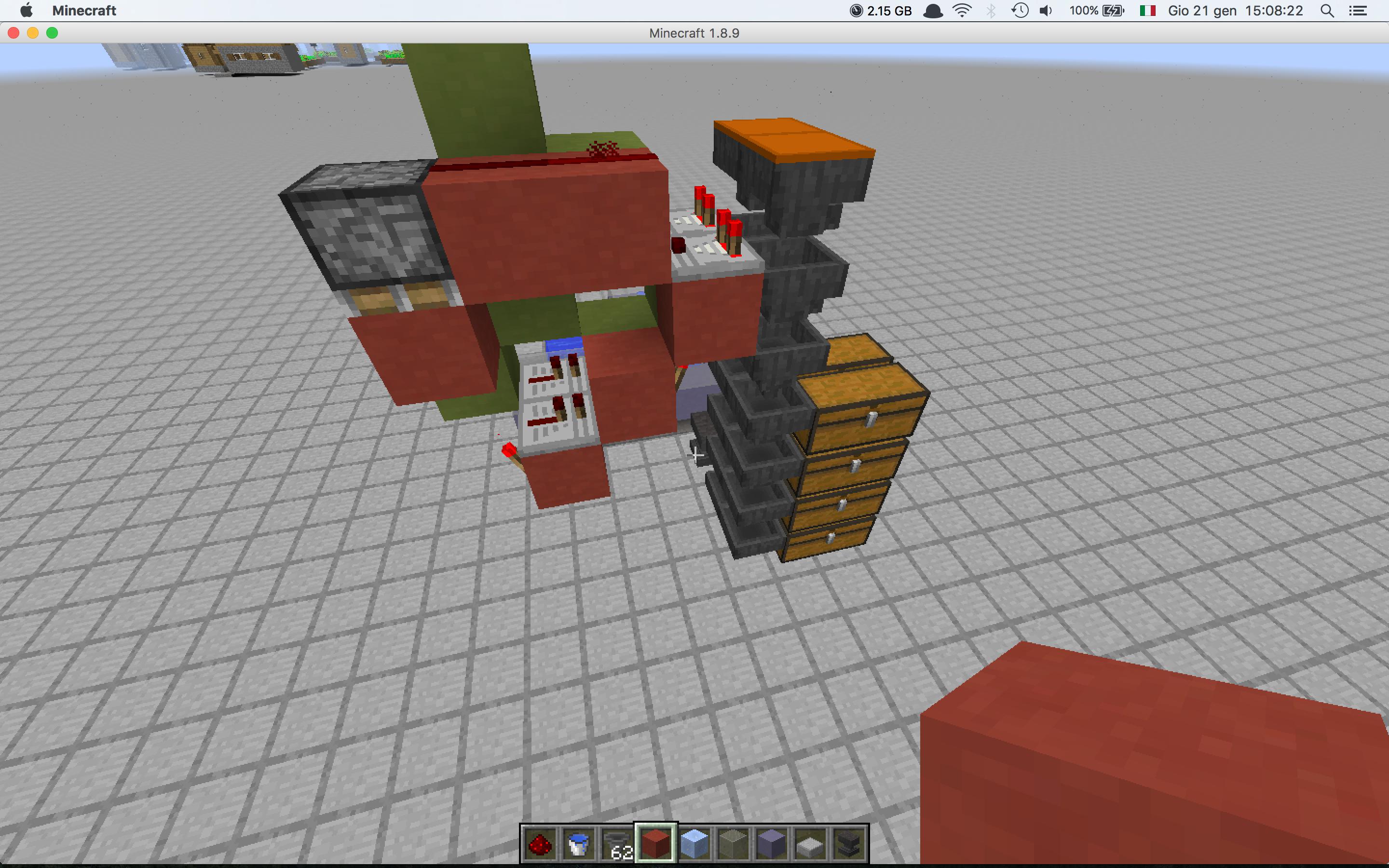 These two are the only two layers that you want to alternate, side to side to each other, to achieve your Overflowproof Item Sorter! Just this easy.

Please note that the first two hoppers are not facing downward. You can either point them toward the comparator (and the block below) or in the opposite direction; not down or toward a side hopper. Also, note the redstone torch under the block with the comparator on top.

Your item input should go right over the hopper with the orange carpet on, replacing the carpet (i only used it for showcasing)

Another note about what to put in the first hopper to sort out items. I do not recommend using the sortable item itself. Instead, my suggestion is to use a cheap, 16-stacking item (did anyone say snowballs?) after renaming it with an anvil, however you like. Only a few experience levels spent for a more secure, and efficient system: in fact you only need four renamed snowball (mine are "Filler") and 6 items of "deposit" in the dropper. 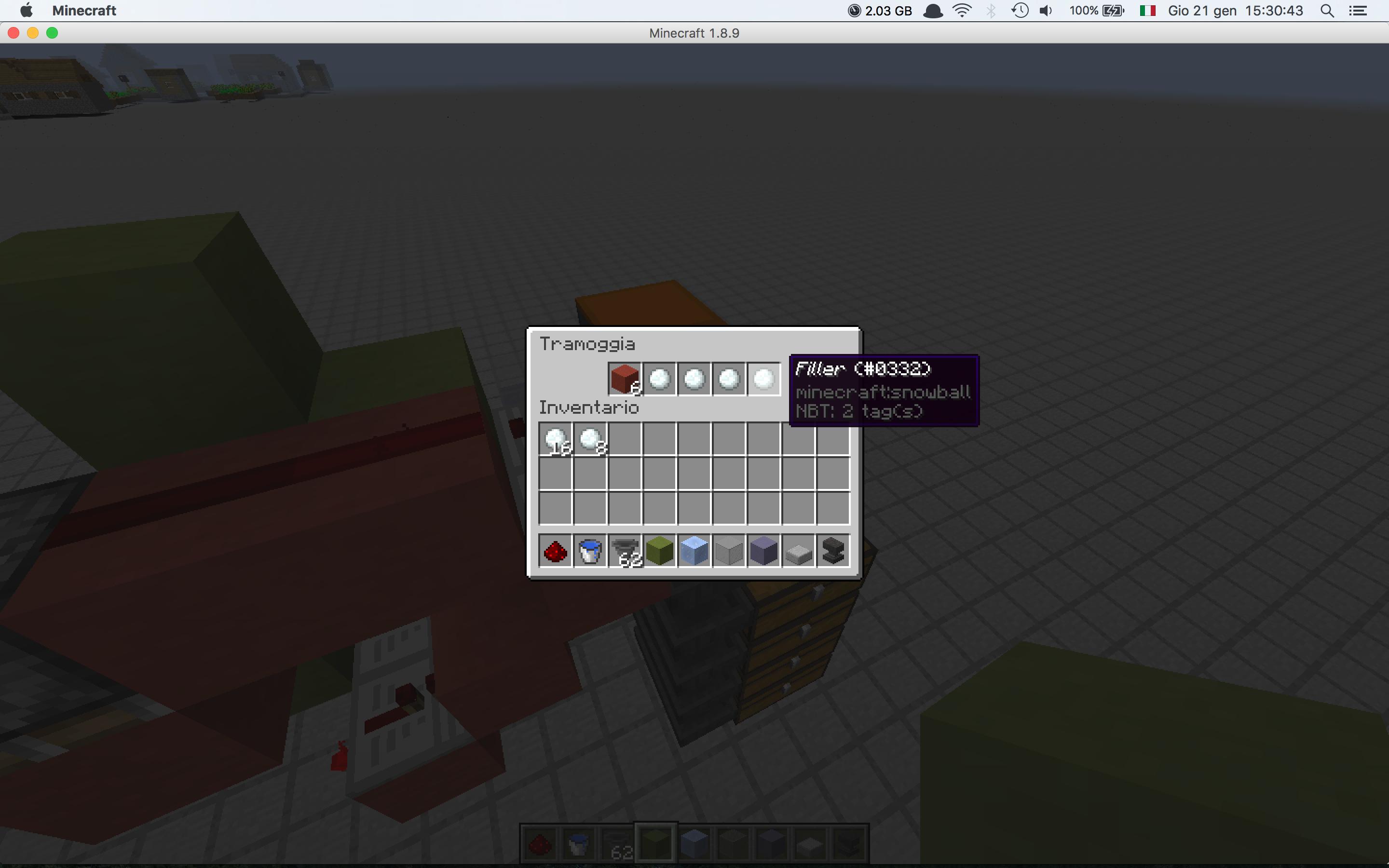 For the input, you COULD use a hopper chain, but i do not recommend... they barely manage large amount of items, putting stress on the cpu due to their mechanics, and generating lag if on a server.

A smoother, more efficient and in my modest opinion even more elegant way of funneling the items is via a water-on-packed-ice slide. 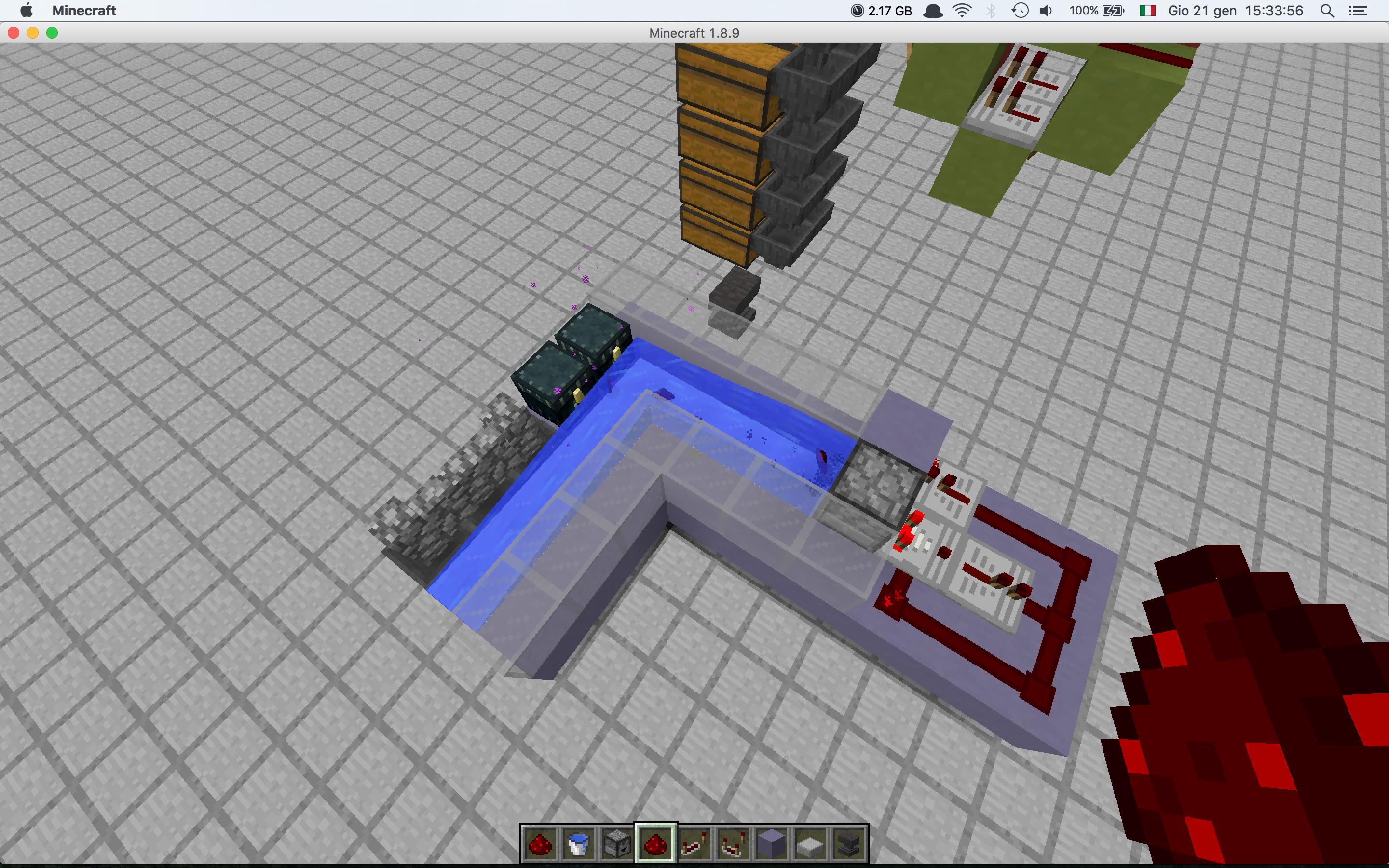 You can drop items in the water by any means you prefer, i used an auto dropper clock mechanism in the example.

You see the items, streaming down the flux, move to the outer limit of the packed ice block (due to the sloped path and End Chest particular hitbox ) and get sucked by the one and only right hopper.

Use packed not normal ice so that it doesn't melt. Use End Chest, not normal ones or items could get stuck.

Making the flux loop is better, so that items that didn't get caught at first passage surely with get at the second one.

The idea is not mine, i think the first one to come up with it is JL2579 in this video (

), alt least is the first one i saw. It's really complete and fascinating, even if old, but the used redstone mechanisms did't change much since.

Mate.... now you can stack buckets.Put 9 buckets in the dispenser for each slot and it will stack up instead of go into a chest.You can then make that hopper go into another hopper with 1 in each slot so you get more room.

You can filter item with Hopper and you can't, I'll explain.

So here is how a Hopper works: A Hopper will always check below it before checking the direction he is pointing around him. So you can have a line of Hopper and Hopper place Under them easly. A Hopper will be block using a comparator next to it if he has the good amount of item Inside it (the threshold number of item is 22 (for exemple 1 diamond on the left slot then whatever block you want on other slot for a Total of 22 item Inside).

Knowing this, you can use your comparator so that each time the number of item is more then 22 it will activate a clock of redstone to make him push the item N°23 to another Hopper placed under this one. Then made the last Hopper pointing to a chest.

So the basic design is :

You can check the tutorials of Mumbo Jumbo on youtube, he have made a lot conserning redstone for minecraft and do them with good explaination so even if you just start redstone, you should be able to understand it pretty easly.

0
How do I make it so players can only place one type of item in a chest in minecraft?

45
How do I make an effective Minecraft SMP trap?
4
Tips for brewing stations in the Nether
21
How can I safely dig straight down?
7
Are Endermen afraid of certain enchantments?
1
My hoppers and droppers are broken, I don't know why
0
In minecraft, how does armor and the unbreaking enchantment work, specifically?
2
Fast or silent efficient trashcan
2
Items in minecraft item filter stacking
2
Item Sorter, with Multiple Items per Filter