How do you block players you don't want to play with?

The match maker keeps putting me up against the same guy who says glhf then quits. I've faced him about 15 times over the past couple days. Sometimes I get him several times in a row. All I want is a normal ranked game. This is a complete waste of time, and is affecting my ranking in a way that is inaccurate and unfair. Is there any way to avoid this player?

On a side note, why do people do this and is it even in accordance with Blizzard's rules?

On the post-game score screen, you can use the drop-down on their name to report them. If you missed your chance after the game, you can access this screen later via your Match History tab.

Open the drop-down menu, select the "More" option, and then pick "Report Player": 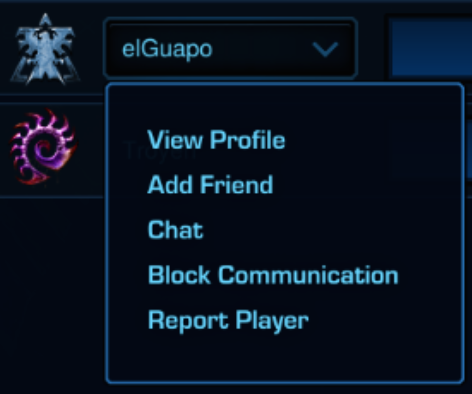 A new window will pop up where you can select a reason (in this case, "Cheating" is probably most appropriate) and then enter an explanation. 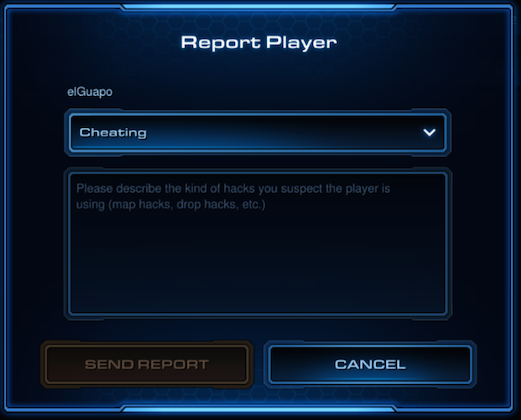 I don't know if it is technically violating the rules. The lead developers have commented in multiple interviews in the past that they don't like players smurfing, so at best it seems to tiptoe the line. In this case, the player you're talking about is likely losing a bunch of games to be placed in a lower league, so they can rack up a bunch of easy wins to grind out the "Win 1000 matches as X" achievements.

I am not sure if you can be matched with a blocked player. (In Heroes of the Storm, which uses the same engine and is made by the same dev team, you can, but it's also a modified matchmaker.) But, by reporting the player, you will bring them to Blizzard's attention and they can investigate and respond appropriately.

9
Dealing with supply block as zerg
11
Is there a banlist or way to block certain players from being in the games you play in Starcraft 2?
6
How do you message other players in Starcraft 2?
59
Are there replays of bad (new) players with commentary?
2
How do you compare 2 players in different leagues in SC2?
4
Can you give resources to Starcraft 2 ai players?
8
When offline, how do you play YABOT single player maps with custom hotkeys?
10
Do starcraft 2 professional players play with minimal visual settings
9
Why don't players drone scout in ZvZ?
6
Can I play official matchmaking if I don't buy Legacy of the Void?