In Mario 64 speedruns, why are the keys necessary?

I've been a fan of TAS (Tool Assisted Speedrun) videos for a long time, and always go back to watch the various Mario 64 Speedruns because they're so good, but after watching a few videos, I wonder:

Why are the keys obtained from Bowser even necessary, when the speedrunners have the ability to slip through walls and "locked" doors (that is, doors that are locked off due to not having enough stars)? What's stopping them from Backwards Long Jump & Running their way up to the final Bowser fight?

I originally suspected that the layout of the keyed door and adjacent walls up to the third floor meant that a BLJ & R would be impossible (due to there not being the "right" kind of gap to pilot Mario through, like the Dire Dire Docks water wall or the original BLJ & R that took Mario into the first Bowser level), but now I'm not so sure.

Anyone know of reasons why a "no keys" run hasn't been done yet?

The reason why is because the castle is split into multiple zones (ground floor, basement, and upper castle), which are not loaded at the same time. Like the outside of the castle is a separate zone, and glitching through the door won't actually bring you inside the lobby.

It is possible to get behind the key doors, probably even without TAS, but there is simply nothing there. You have to activate the door to load into the different zone.

The reason why you can skip the first key as you showed, is because the basement has a second entrance, which is not locked. Normally you can't activate a door while underwater, but if you reach the door before the game can register that you are swimming its possible. The upper castle only have one entrance, so this trick can't be used here.

I'm not aware of any glitches where you can load into a different zone through a locked door.

If you are interested in these kinds of technical glitches, you should check out pannenkoek2012 and his second channel on youtube.

There are different categories of speed runs. They are split up based on how many stars are required before finishing the game.

The relevant categories are:

There are historical reasons behind each of these categories. 120 stars is effectively equivalent to a 100% run in other games, where you get every available star. 70 stars is equivalent to a fast casual run of the game, since 70 stars are the minimum to beat the game without using glitches.

From there, the other 3 categories exist because people found progressively more effective glitches over time for skipping content. First, someone learned how to skip to the top of the infinite stairs and how to glitch through some doors. You needed 15 stars to open one particularly annoying door, then 1 star to move the entrance to Dire Dire Docks back to reveal the Bowser level, then glitch towards the end of the game.

Depending on the category of run you watch, different kinds of content will be skipped. However, none of the runs skip any of the Bowser fights (which is how you acquire keys).

After writing all this and re-reading your question, I have realized I don't know why the key doors specifically aren't skipped. I'll leave this up because the background info might shed some light on the puzzle-solving process of getting this game to the state it is, but I don't actually know why the key doors aren't skippable. Maybe someone just hasn't found a skip yet, or maybe you literally can't start a given Bowser fight unless the previous one has been completed because of the way the game is programmed.

This video in particular shows that if you take the obvious strategy of doing a backwards long jump (BLJ) behind the second key door, then you get a black unloaded zone that cannot be crossed: 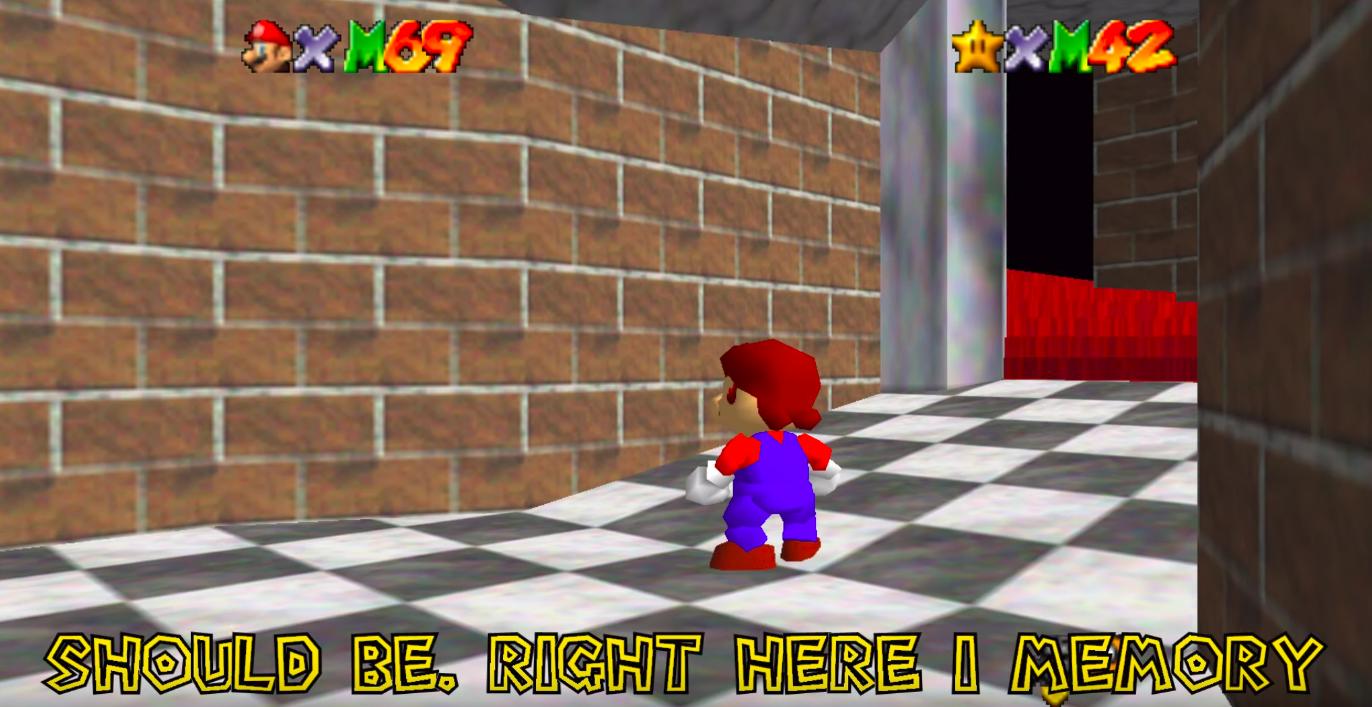 I suspect that the code surrounding this has been thoroughly reverse engineered since it is of such high value, I wonder if someone has uploaded notes somewhere.

13
What are the differences between Super Mario 64 (N64) and Super Mario 64 DS?
1
Can I change the controls for Super Mario 64?
3
How can I get through the jet stream in Super Mario 64?
9
Did the Mario Stretching minigame before the Press Start screen do anything?
2
Why is the Memory Card used an element tracked in Animal Crossing speedruns?
35
On San Andreas Speedruns, why do players blow up the Picador in the mission Ryder?
1
Long Jump Glitch Super Mario 64
33
Why are there no DOOM 2 Nightmare 100% kill speedruns?