Is there a way to make a tourney bracket with more than just 2 combatants per round?

I have numerous tourney apps on my ipod but they only support 2 per round. How does one usually make a tourney with 4 competing against eachother at the same time?

I have found that creating tournaments with a four player free for all scenario can require a fair balance of intuition and logic. You have to ask questions such as whether or not three player matches would work and how many winners do you want to move on from one round to the next.

What group sizes are acceptable for the game you are running? Will you allow groups of three or two? The more strict this is, the more byes you will have. If you had 15 players, you could have three groups of four and one group of three. However if you did not want to have a three player group, you would need to turn that group of three into a group of two and have one bye. I believe the groups of three are preferable to having byes. You may be concerned about players teaming up, but that is an issue you can encounter even in a four player FFA. There just has to be an honor system, and players who break the rule would be subject to the tournament operators judgment.

I think the point where intuition comes in is that you may be ok with 3 player matches, but you maybe don't want the final match to be a 3 player round. So you may want to rearrange the semi-finals to ensure that the final round is between two players. Alternatively, you could do round robin style 1v1 matches between the final three players. What you decide to do here may depend on the game you are playing and the group of people you are playing with.

It is difficult to create something that algorithmically resolves a list of players into four player FFA bracket without any flaws. However, I was able to create a program that sorts players out into the biggest possible groups. I added multiple options so that you can tweak it to find what works for you in your situation. 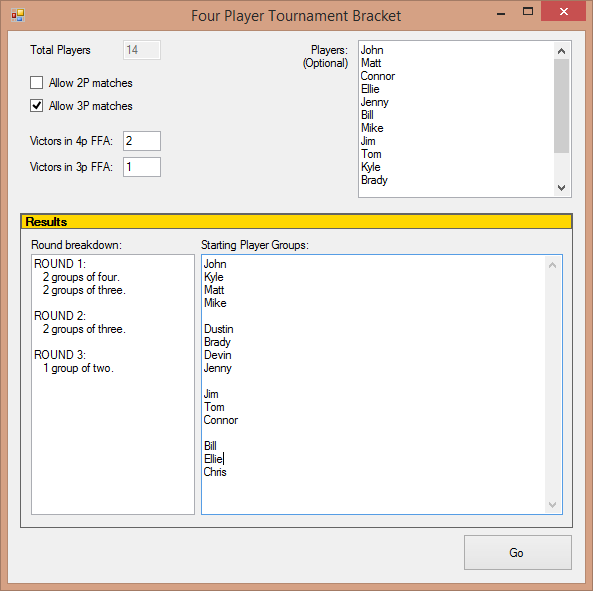 You can view the source code here: https://github.com/hagelt18/FourPlayerTournamentBracket

Smash Bros Victory Conditions in 4 Player FFA One more side note in regards to smash bros specifically, if you decide to have two winners from a four player round, you could simply take the first and second place players or you could award victory to the last surviving player and the player with the most kills. The latter method is how the official Nintendo tournament was run at E3 in 2014.

Not the answer you're looking for? Browse other questions tagged wii-u super-smash-bros-4 .

2
Is there any way to control how fast Wild Gunman fires with Duck Hunt's Down B?