When should I use the negative milestone unlocks?

The most recent timed event zone of Adventure Capitalist, "New You", has a set of paired investments, a healthy and slow option and a corresponding unhealthy and fast. Every other milestone unlock for the unhealthy option sabotages the speed of the already slow healthy option. 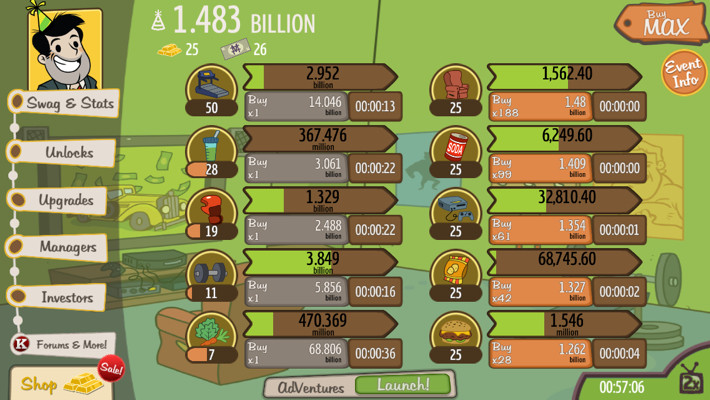 I haven't seen any "most efficient" guides, but this is what I did and completed it already.

I started with getting the first unlock in each option, which i will refer to as the left (healthy) and right (unhealthy) sides. Every second unlock on the right is negative (80% profit speed of left side), so I would suggest avoiding the negative unlocks as long as possible. At first you may need to unlock the first 3 unlocks on the right to get extra profit (2 positive unlocks for right, 1 negative for left), but I would focus on the left side.

After getting enough angels, roughly after 1-3 resets, to reset fairly quickly, then I would get 30 in each on the right (to avoid the second unlock). After that I would only focus on the left, until at some point you will max out the left side (75 up to ~275 in each).

Not the answer you're looking for? Browse other questions tagged adventure-capitalist or ask your own question.

6
How do the upgrades work?
3
What happens on the moon launch?
6
What is the purpose of Mega Bucks?
4
Can you switch between Earth and the moon without launching and restarting again?
2
What produces the most money?
14
Getting over the “unlock hump” on the Moon
1
How does the store credit work?
0
What’s the price scaling for businesses?