What exists beyond the farlands?

This question is adressed to the older versions where farlands like the following image exists. Beta 1.7.3. 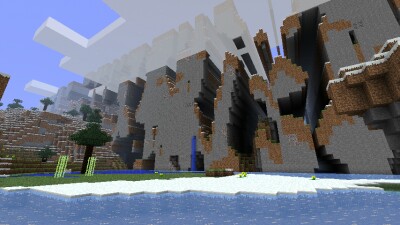 My question is not about how big is a Minecraft world, my question is about what can happens if you keep flying through the farlands for a lot of time.

Will the game crash due to the HUGE data values?

Also, does the world size depends about if a computer is 64 or 32 bits?

Per the Minecraft Wiki's entry on Far Lands:

As the player journeys even deeper into the Far Lands, the effects worsen to the point where the game is unplayable. At X/Z ±32,000,000,[5] block physics stop functioning correctly. Lighting doesn't work and the blocks, although they appear to be there, aren't solid. If the player tries to walk on these blocks, he or she will fall into the Void. At excessive X/Z positions, world renderer no longer works, or takes incredibly long times and uses most, if not all CPU usage. It then becomes almost impossible to close Minecraft without a task manager.

So, yes - eventually, if you go far enough into the Far Lands, Minecraft becomes less and less responsive to the point of the only solution being to kill the process.

As for whether a 64-bit processor vs 32-bit changes anything? Doubtful, although the trivia section does include this bit of info:

The highest signed value for 64-bit machines is X/Z ±9,223,372,036,854,775,807. However, despite this being the limit any machine can go, it may not be possible to reach anywhere near this point, since the vast majority of people experience instant client freeze, followed by the client crashing. If teleported there, the screen will display completely black with no sun and oddly glowing clouds.

So while it sounds like it is conceivable to go that far, Minecraft would probably cease responding long before.

I have never been to the farlands, as I did not care about Minecraft as it was wimpy in 2011. But I did some research in a mod.

The far lands are where land generation collapses. Your unique Minecraft world created my seed code, is considered infinite, but you won't really make it very far past 2 million - 3 million blocks. Your Minecraft world is about 30 million by 30 million blocks witch is 900000000 million (900 million) blocks. 600000000 (600 million) of those blocks is far lands. If you ever make a journey to the farlands, the last 400,000 blocks to the farlands you will lag, where it would make the game very very hard to play. If you ever get to the farlands, you won't be able to walk more than 10 or 20 blocks. You see it's dark in there and you will fall into a void after 20 blocks, and there is no light unless you add some or use a potion. Also if your game does not crash, you will lag to the point you fall into a void, and never die. You will just fall and fall. You may need a computer professional to fix your computer.

(Fun fact: Your world will probably start to melt, within 400,000 blocks of the farlands, unless you teleport or nether travel, so have fun trying.)

To answer your original question, "Will the game crash due to the HUGE data values", Yes it will.

Also to the 2nd question, "what can happen if you keep flying through the farlands for a lot of time."?. Well, it won't work, unless your in laggy creative, or speculative mode. If you make it there, after 10 to 20 blocks in, you will just fall into an endless void, as the world generation can not exist because human computers are primitive. You can make it a little farther in creative but you will probably just lag, and your Minecraft world will disappear.

15
Dealing with creepers on a new game
5
Minecraft Biome / Spawnpoint shifted
3
testing if PrimedTnt exists in a block
2
Are enchantments beyond Protection 10 effective?
3
Is the unbreaking enchantment beyond III effective?
0
How would making a world copy/backup work in Java Beta 1.7.3 work?