How do I earn gold?

I want to buy the Mining Helmet from the Merchant, but it costs 8 Gold Coins, and I do not have any. How do I get Gold Coins?

If you're looking for good ways to farm coins, have a look at this question.

One of the quickest ways to rake in the coins is farming meteor heads. You'll need to break a single shadow orb to spawn the meteor. Shadow orb harvesting is hard but you can do it much earlier with clever tunneling and a couple sticks of dynamite.

For continued quick coins an artificial meteorite biome can be used instead. 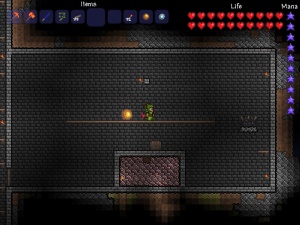 I find that blood moons are excellent opportunities for making some money. Build upwards into a hill and simply stay there and let the zombies climb up to you whereby you can hit them back down until they're (un)dead. It should be upwards because too many zombies on a flat surface during blood moons can overpower you despite swinging your sword non-stop.

Similarly, goblin armies are useful for making money (albeit perhaps a bit later in the game).

However you can also follow the safer routes mentioned in the wiki. I would strongly advise you to invest in a piggy bank where you should store your coins so that you don't lose half during a battle. It costs 1 gold coin though.

You can sell precious stones (amethysts, rubies, etc). They sell for a good amount of money and don't currently have a lot of uses. If you want to make a phase blade or jungle armor later in the game, make sure to set aside what you need for those first. Note that you also risk missing out on any other uses for them that could be added in future updates.

An easy way after you've gone into the Dungeon and got the Mechanic (or otherwise have a friend capable of wiring) is to do the following:

You can effectively stand underneath the spawner and farm Goldfish as long as you want. If you throw in a Heart statue where you're standing, you'll probably never die if you're above ground. Just return every hour or so, sell off your piles of goldfish, and rake in a ton of gold per trip.

Blood Moons become even more profitable because the fish will immediately turn into Corrupt Goldfish, which drop plenty of money, no sales trip needed. (You will have to add the dart trap, though. Otherwise, well...)

This isn't the most effective method (by far), but it's something you can pretty much set-and-forget for an hour at a time, no further interaction necessary.

If you're needing a mining helmet then this probably isn't going to be applicable for you, but the dungeon is a great way to make cash. So many things spawn there that you keep raking in cash drops as you kill. By the point you get there though, you probably aren't worried about just 8 gold. I figured I would toss this answer in since people may want gold for other things than a mining helmet. I believe I made my early money just mining a bunch and selling off gems. I never bothered with the mining helmet personally, I just used torches until I found an orb of light.

I've found the best early(ish) way to make money is to farm the Eater of Worlds, he drops over 99 Demonite per encounter, which sells for rougly 8 gold a stack. If you use a Vilethorn he's extremely easy to kill repeatedly. The only part about this is getting enough vile powder to repeatedly summon him, but such powder can be bought from the dryad during a blood moon at the price of 1 silver per powder. IE: 30 silver per summon, with each summoning gaining you almost 8 gold. So it easily pays for itself if you drop 3-5 gold into vile powder. Between that and a mediocre Vile Mushroom farm you should be fine. The EoW drops enough rotten meat himself to supply that half of the crafting reqs for the Worm Food to summon him.

You can get money from:

6) Make use of fast time, i.e. turn frame skip off, minimize terraria by clickin on its icon in the taskbar, not the minimize icon in the window

7) Kill stuff ultra fast and get rich in no time

8) Cheat by downloading Warehouse maps, such as this or this or any other warehouse maps out there.

8
Unable to get merchant NPC
23
What do I do with all this money?
2
How do I get the merchant to come to my house?
5
How can I increase spawn rate of mining armor/undead miner?
0
Why can't I mine my ore in Terraria?
1
What is this big Gold and Blue thing in Terraria?