I'm interested in playing through the Zero Kills challenge which The Weirdist proved to be possible (YouTube playlist) back in December last year. Before I begin though, I'd like to know what actions count towards the Combat statistics displayed in the Pip-Boy's Data tab: 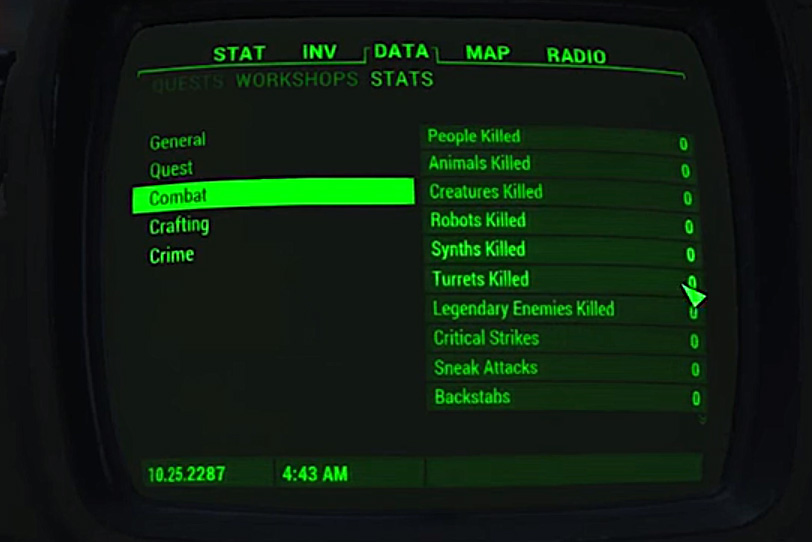 I'm self-answering this because I know of a few actions which do count. I don't believe this to be a complete list though, so I'm definitely looking for other actions which I'm missing here:

Are there any others?

NPCs which are not your Companions who go on to kill things do not appear to increase any of these counters; neither do enemies which kill other enemies (even if they were ordered to do so by you).

5
How does the Combat Medic Perk in Fallout 4 work?
5
Fallout 4 Pip-Boy Android app stopped connecting to PC version running on Windows 10
5
Why is the Pip-Boy so inconsistent when invisible?
13
Can I select the nearest quest to my location in my Pip-Boy?
6
Can I select the main mission in my Pip-Boy?
1
What are the Fallout 4 Pip-Boy companion app network requirements?
8
Is there any way to get the combat rifle very early in Fallout 4?
0
Fallout 4 What happens to Minutemen (spoilers)
7
How to count and group items on a line in the Fallout 4 Contraptions DLC?
2
How to equip the white winter-wonder-wasteland Pip-Boy?