What is the name of the pseudo-3D view in 2D games like Cadillacs and Dinosaurs?

I need to know the term for the kind of projection in games like Cadillacs and Dinosarus (a beat-´em up, shown below). The game uses a kind of pseudo-3D effect with techniques including isometric/axonometric projection, oblique projection, orthographic projection etc

What is the correct term for this behavior? Cavalier, cabinet, isometric, ...? 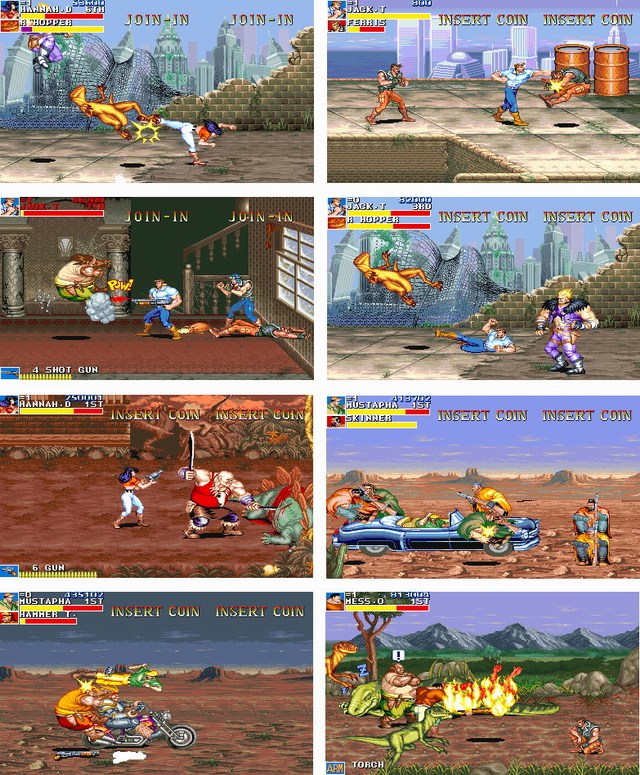 I believe you are referring to the Parallax Scrolling technique.

Parallax scrolling is a technique in computer graphics and web design, where background images move by the camera slower than foreground images, creating an illusion of depth in a 2D scene and adding to the immersion.

Referring back to the screenshots in OP, this appears to be the technique in play. In order to create the 3D depth illusion a number of images are layered, with the bottom most images on top. Each layer will scroll at a different speed.

To simply the scenario, consider the game screen is split into 3 images:

Consider the screenshot in the bottom right.

I have used an example of 3 planes, but you will probably find the background has multiple planes itself (e.g. the clouds may move slower than the mountains). The main ground will also have its own plane system so that items lower down the axis will overlap items higher up. To complicate matters slightly, this is different from a character jumping (they will move higher up the screen but remain in the same axis/plane).

As mentioned in the comments, this technique is part of the 2.5D technique.

The Parallax Scrolling technique is used in a large number of games. Streets of Rage and Street Fighter spring to mind. It is also implemented into the SCUMM game engine (although this game engine additionally offers sprite scaling on the y-axis).

I don't think there can be an exact answer to this question because it does not appear that the artist(s) who drew the images adhered to a specific methodology. That said, you can still derive some projection methods used in certain areas.

Oblique Projection looks to be the most primarily used projection method. It is most clear in the top two images where the front of the building is an flat view while the top and sides follow a parallel angle. I measured the angle on the top edge of the building and the cracks of the roof tile to determine it had the expected approximate 30°/150° angles. I can't tell you if it is Cavalier or Cabinet because I don't know the measurements of the building.

See more examples that use this projection method 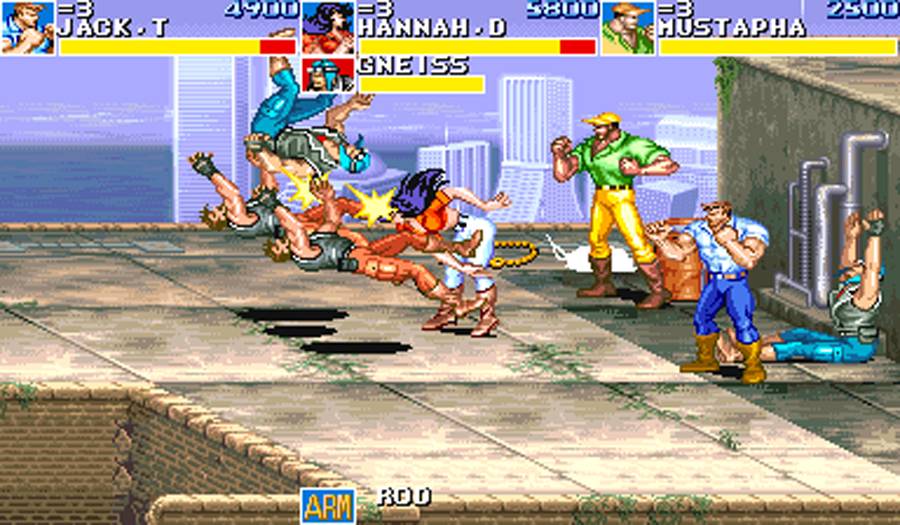 Perspective Projection is also used in some of these images, particularly the sixth and seventh image where even the foreground is drawn in a way that grows smaller in the distance. This drawing technique's use is more visibly evident from a screenshot from one of the later stages. See how the edges of the top plane of the stairs are not parallel, instead they converge towards a single point in the distance.

With this in mind I feel like you have to take a step back and accept that the artist(s) who drew these images did not have a strictly enforced projection method. They just drew the images so they looked good and provided some semblance of a 3D environment. A combination of that, parallax scrolling, and 3-Dimensional movement (left/right, in/out, jump/fall) gives the player the illusion that they are in a 3D environment.

Not the answer you're looking for? Browse other questions tagged terminology cadillacs-and-dinosaurs or ask your own question.

6
Is there a term for this kind of video game background?