How big an area is spawn chunk(s)

This is a fairly basic question, but I can't seem to find a definite answer anywhere. I'm setting up a spawn for a public server and need to put command blocks in the spawn chunk or chunks, where it's always rendered. I've read that the actual spawn chunk is always rendered, and in other places that it's surrounding chunks. Basically, from a central point (3617 x 3760, chunk 1 2 0 in 226 2 235), how far around this spot will always be rendered?

This is a 1.9 snapshot server, if that changes anything.

The term "rendered" is incorrect here, as that implies the client will render blocks and entities even when they are not within range to do so. Instead, "loaded" is the appropriate term, as the spawn chunks are forcibly loaded into memory by the server in order to send update ticks. 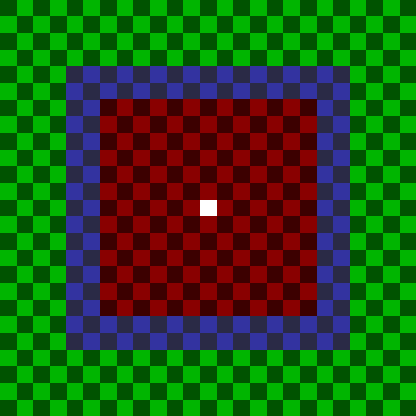 You would want to place your command blocks in any of the red/blue chunks.

10
Why does my AE Crafting System lose its jobs when I'm no longer present?
16
Is there a way to see where Chunks meet?
3
Why don't spawn chunks work properly with OptiFine?
0
Using spreadplayers to tp them to armorstand in unloaded chunk
1
Keeping Server Chunks loaded? [Vanilla 1.9]
1
MC 1.9: Chunk Loader for Redstone Circuits?
2
What's the best location for the player to spawn slimes in these 4 chunks?
0
Does chunk (0,0) have an increased spawn rate as claimed in this old post?
3
minecraft java 1.13.2 - cannot interact with blocks | chunks doesnt load | chat is ok however | spawn protect is 0
3
Keep the Nether loaded