How can I tell how many kills my soldier is away from promotion?

How can I tell how many kills my soldier is away from promotion? I'd like to get this information, especially when in the middle of a battle, as if I know that I'm just a few kills away from a promotion and the enemy is sending reinforcements, I can reliably "farm" for a bit to get that soldier his/her promotion.

Alright, I dug into the code some more and updated my answer.

Here are the number of kills needed for each level, taken from DefaultGameData_XPData.ini:

However, there's more to it than just straight-up kills.

Every time a unit gets a kill, all the other units on that mission get partial-kills. The game calls these "KillAssists", but that's a misleading name because the unit earns a KillAssist whether or not they did any damage.

How much a "KillAssist" is worth varies by class
(taken from DefaultClassData.ini, variable name KillAssistsPerKill)

Additionally, Psi Operatives gets a kill bonus called a "PsiCredit", worth 1/3rd kill, every time they are hit by Feedback.

Finally, if a unit started at any rank above 'Rookie', they'll have additional hidden bonus kills equal to the number necessary for that rank.

Assuming you obtained a unit at 'Rookie', you can see how many kills they have in the armory... 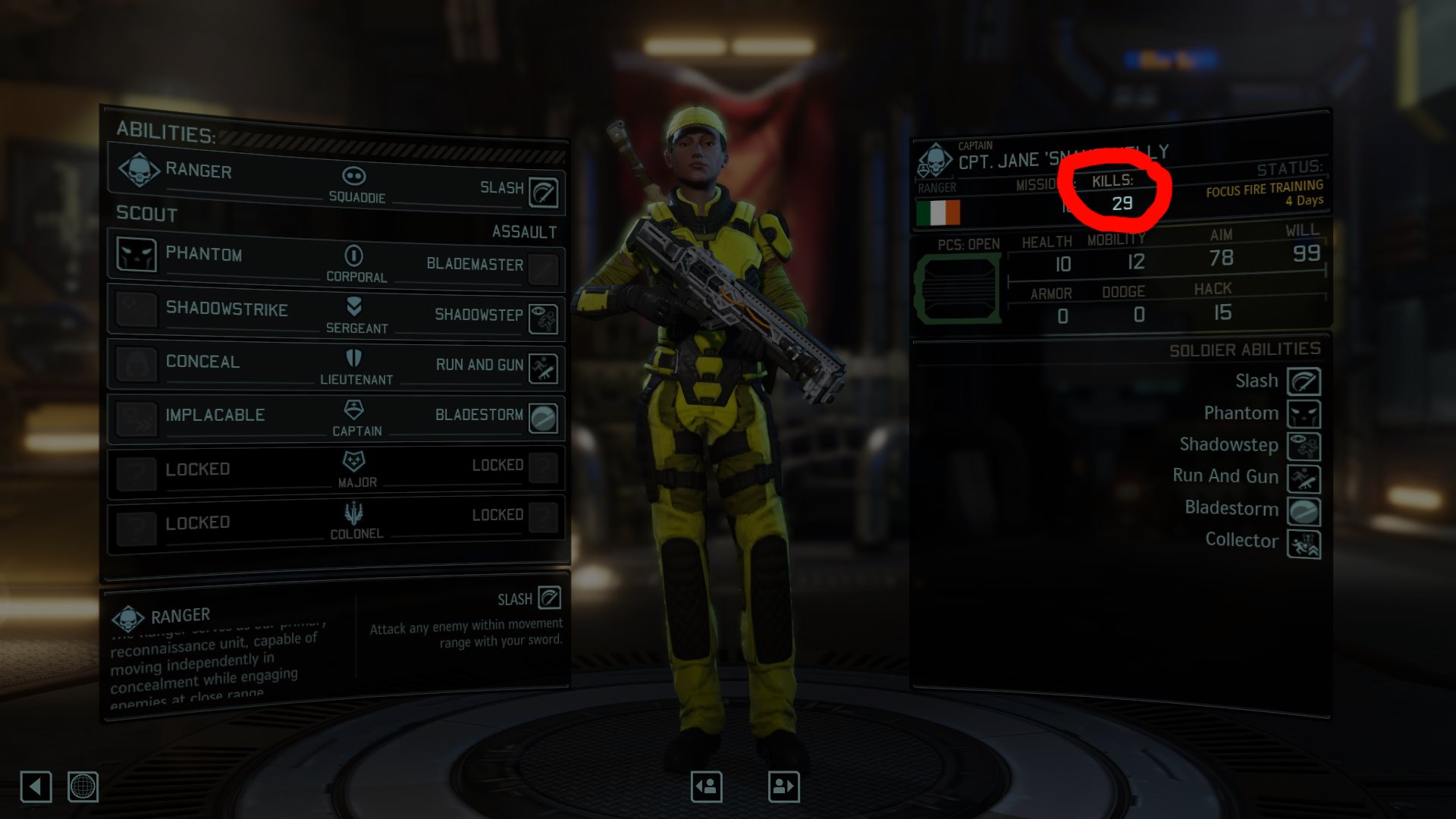 but without a save-file viewer (which doesn't exist AFAIK) you cannot view their KillAssists. The best we can do is guesstimate from the number of missions.

In my screenshot above, if we assume she's encountered, say, 8 enemies per mission on average, then over 10 missions she's encountered 10*8=80 enemies. That gives her 80-29=51 KillAssists, which counts for 51/4=12 kills, bringing her approximate kill-total to 29+12=41 kills. So she needs around 16 kills or 64 KillAssists to level up to Major.

Edit: There is now a mod that shows KillAssists on the soldier info screen: Accurate Soldier XP

Some other interesting things I discovered while code-diving:

6
Can evacuation be used as a tactic and do evacuated soldiers get experience?

11
Do Gatekeepers have any weaknesses that can be exploited?
15
Can I safely wait before starting a mission?
17
How do I predict when a car will blow up?
4
How can I shut Bradford up?
4
How many turns does a Shieldbearer's shield last?
6
Can evacuation be used as a tactic and do evacuated soldiers get experience?
2
What is the chance to inflict certain amount of damage with varying weapon or grenade damage?
4
How can I stop the "quick shot" feature in XCOM 2 Tactical Missions?
7
How can I speed up recovery from "shaken"?
17
How do movements while concealed affect alien patrols?