What happened to Dr. Vahlen?

Are there any references in XCOM 2 as to what happened to Dr. Vahlen? Dr. Vahlen was the Chief Scientist who had Tygan's now current role, but she is no longer seen at all, and I can't find any reference in-game referencing her, or any voice comms talking about her, despite the wiki saying that they talk about her being missing.

She's mentioned in the XCOM Archives in the Commander's quarters (bold emphasis mine): 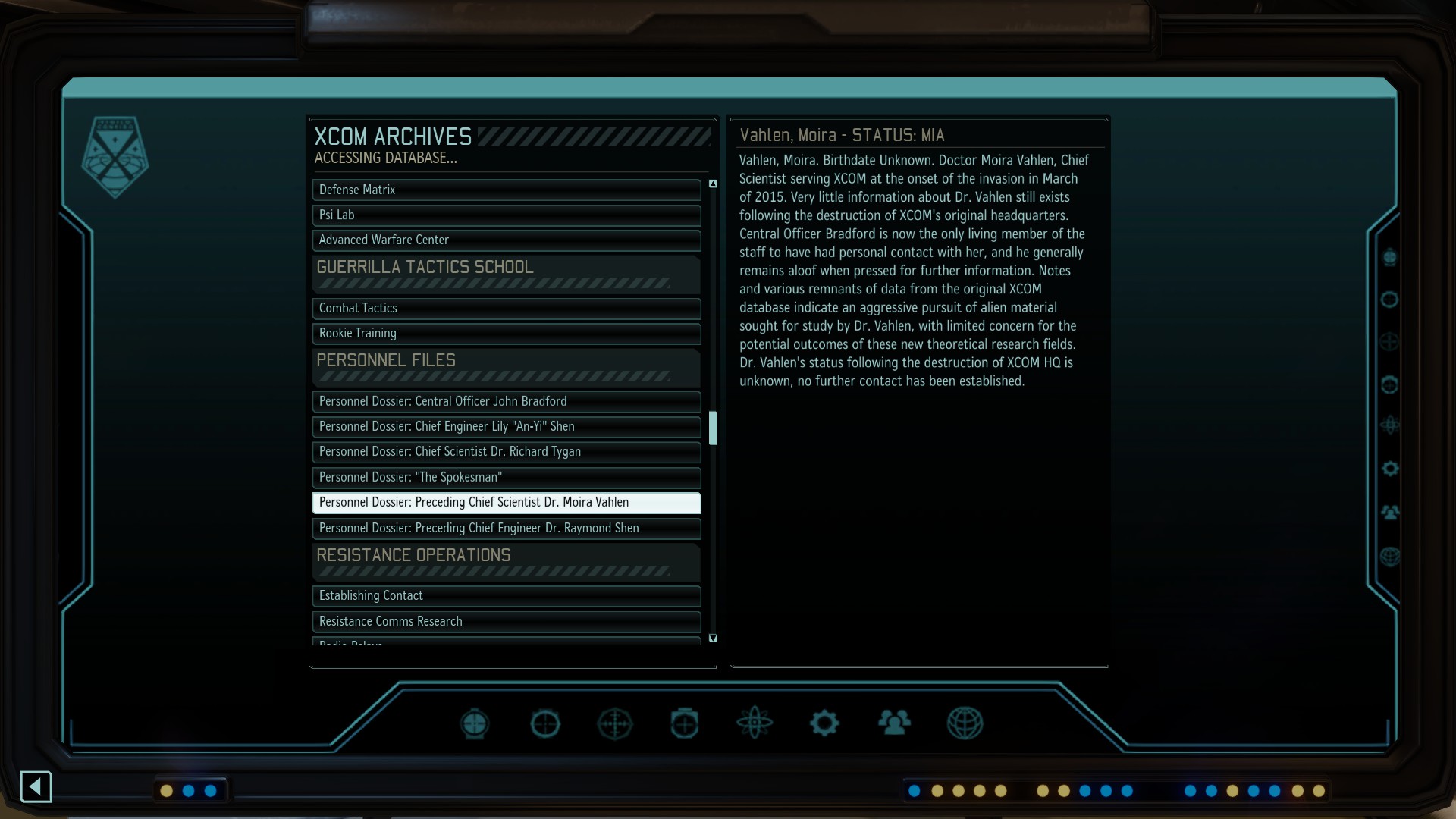 Vahlen, Moira. Birthdate Unknown. Doctor Moira Vahlen, Chief Scientist serving XCOM at the onset of the invasion in March of 2015. Very little information about Dr. Vahlen still exists following the destruction of XCOM's original headquarters. Central Officer Bradford is now the only living member of the staff to have had personal contact with her, and he generally remains aloof when pressed for further information. Notes and various remnants of data from the original XCOM database indicate an aggressive pursuit of alien material sought for study by Dr. Vahlen, with limited concern for the potential outcomes of these theoretical research fields. Dr. Vahlen's status following the destruction of XCOM HQ is unknown, no further contact has been established.

Many of the characters will also mention her from time to time in the Avenger:

We've been picking up some weird transmissions lately; it sounds a little like German, but it's hard to tell.

I've been digging through some of the old data files Central has been holding on to since before the war. I keep running across notes scrawled in English and what looks like broken German. I should probably ask him about it.

I have my suspicions that Vahlen was actually captured by the aliens and used as the basis for the Codex unit, but that's pure speculation at this point.

Vahlen is mentioned in the prequel novel. Minor spoilers follow.

The prequel novel, in the large, deals with the Resistance's efforts to find and capture the crashed alien vessel which becomes the Avenger.

Early on in the novel, the protagonist and his squad travel via submarine to a volcanic island off the coast of South America. That island contains a hidden Resistance research base known as 'Wunderland', which is headed by Dr. Vahlen.

Unfortunately, one of the protagonist's friends has some sort of tracker embedded in her, and ADVENT forces attack the island. The protagonist's squad heads to the surface to fend off the enemy forces. While they're doing so, the base self-destructs.

By the time they've fought off the ADVENT troops the submarine's departed. They explore the now-wrecked base and discover a diversion - a bunch of wrecked helicopters and dead bodies intended to fool any ADVENT forces looking for survivors. A trap door leads to a cove where the protagonist's squad commandeer a boat to continue their journey.

Vahlen's fate is left unmentioned, although the protagonists theorize that she and whoever survived the assault fled on boats (or even a second submarine) after self-destructing the base.

In short — if the prequel novel is considered canon, Vahlen was alive, well, and conducting research for the Resistance weeks or (at most) months before the actual start of the game, but her current whereabouts are still unknown. She may have died escaping her base, been captured by ADVENT while/after escaping, or slipped away and made it to another Resistance haven.

Central mentions her from time to time when you hang around in the avenger long enough. Quotes I've personally heard are

"broken transmissions in what could be German have been broadcast lately"

"valhen went missing after xcom fell but I can't imagine she would just give up so easily, not with earth's freedom at stake"

There's another reference to her in the game: If you play the tutorial, when you're waking up after having the implant removed and Bradford talks of losing good soldiers, you see a photo of Bradford, Shen and Vahlen at the time of EA/EW.

WHAT FOLLOWS BELOW THIS, IS INFORMATION THAT CAN BE QUALIFIED AS SPOILERS. DO NOT READ IF YOU DO NOT INTEND TO SPOIL THE STORY FOR YOURSELF!

In the most recent addition of XCOM 2, the Alien Hunter DLC, there is hinted at several NEW campaign missions. I have now endured ONE of these campaign missions, and Vahlen is definitely playing a part. She is not found in the first mission, however. I have, as of yet, not come across other missions, or other implications that she is found later on. During this mission it is heavily implied that Dr. Vahlen is walking on borderline ethically acceptable boundaries, or even overstepped them. That is all I'll say.

16
What Hidden Abilities are available?
10
What weapon mods can be found, and what are their effects
6
What does "toggle command range" do?
4
What is average cover bonus?
25
What are ADVENT burgers made of?
10
What is the optimal base layout?
7
What is 'ADVENT' an abbreviation for?
12
What effects cancel the "Frozen" state
8
What triggers the Avenger music change?