While I already know about the difference between their price, energy efficiency, and performance,

I am interested in which company will provide a longer driver support/update for their graphic card.

Nvidia tends to support their GPUs for an extra year or two longer than AMD but it partially depends on their development cycles and timings of their new GPU releases for exactly how long they support old GPUs. Both companies typically support their products for at least 5 years. Note that this is about 5 years from the chipset in the card being introduced, a rebranded card will likely have a shorter support cycle because the "about 5 years" starts with the original card.

I have an old GeForce FX 5500 (on my shelf), which I'm pretty sure I bought in 2004. According to nVidia's driver download/search page, the last updated driver for it is dated June of 2008: 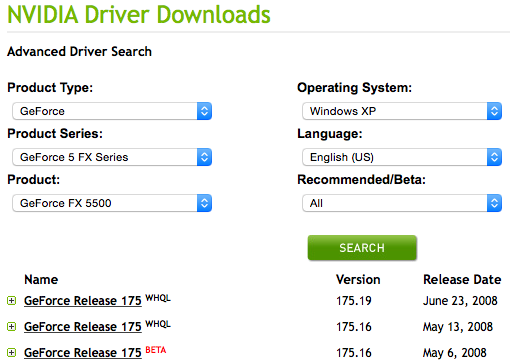 This would suggest that Probst's indication of about 5 years is correct.

On the other hand, AMD announced a few months ago that they would be discontinuing support for several graphics cards...

It looks like the Radeon HD 8000's came out in 2013, so that suggests that you may have less than 3 years of driver support from AMD.

Not the answer you're looking for? Browse other questions tagged graphics-card or ask your own question.