Do quests limited in time affect the rest of the game?

In Xenoblade Chronicles, there is a lot of side quests. But at some point in the game, it looks like we are unable to finish some of those (like some quests from Alcamoth), as they are limited in time. Those quests are marked with a watch icon ( 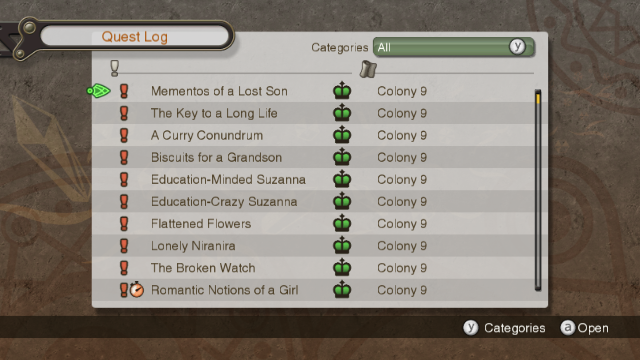 Is there a way to finish those quests later in the game, when they would be available again? Or, if it is not the case, does it have an impact on the rest of the game, like not being able to get some rare items or something?

Once a timed quest expires, that's it, it can never be completed in that save file and you'll never see it in your list of quests again. This does indeed mean that you won't be able to get their rewards. For example, there are only two copies of the Lime Bangle equipment available: one from a normal quest, and one from a timed quest, meaning that if the timed quest expires you'll only ever be able to have one instead of both. But you don't need to worry about missing anything completely:

There are some minor exceptions. There are a few timed quests that give you gems of ranks otherwise unavailable. But when you can get Poison Attack III gems, who cares about a unique Poison Attack II gem? Note that this can get pretty complex: Paralysis IV is only available through a timed quest and a mutually-exclusive quest, and you can only get Paralysis V crystals from level 70-90 enemies.

There is also a reasonably major exception. One chain of timed quests that travels through Frontier Village and Alcamoth leads to a final non-timed quest against a Unique monster. You do not get any exclusive rewards, but if you miss a step at any time before it expires, you lose the chance at quite a few subsequent quests.

Not the answer you're looking for? Browse other questions tagged xenoblade-chronicles or ask your own question.

3
Where can I find the collectibles for the last page of the Collectopaedia?
1
Frontier Village Material Quest 3
0
What is the order of these quest triggers?