Does deltaV have a limit using only stock parts?

The problem: I am trying to go to as much of the Kerbal system as possible, with the technology and base facilities that most people (including myself) used to get to the mun. (Why? We go to the mun not because it is easy, but because it is hard. And Duna is harder!)

I appear to have run into something of a limit in terms of the amount of deltaV that I can fit into my rocket. With a 5t payload, I can't seem to get past about 8km/s. Is this a hard limit? Am I screwing up somewhere, or is this just the reality of rocket science?

Note that I am not asking you to design me a better ship. I want to know if I'm hitting the engineering limit. If I'm near the limit, I can let go and move on. If I'm short by 6km/s, then...well...I've got some redesign to do...

You're trying to solve the wrong problem.

You do not want 8k deltaV rocket for miniature payload. You do not want to even design such rocket in first place. What you really want is to do exact opposite, recursively make a payload and then put some rocket under it. Each stage payload can simply be defined as everything above it.

What you really want is to deliver certain payload to certain place. Whether it is lander, orbiter or just impactor changes only payload mass. Let it be mass Mpayload, and mass only, ignore its internal delta-V for now.

Now that you have defined your payload, transfer stage is required. Now this is time to heavily think about fuel efficiency. Thrust-to-weight-ratio (TwR) does not matter, all you care is fuel efficiency to get as much delta-V as you need with as little mass as possible. You could ask "Why TwR is not important? You can't fly without it!", answer then would be "Because you are already in stable orbit." Once you are in low orbit, you are halfway to anywhere. Without any velocity losses (friction, air resistance, gravity), and with proper planning, you can use time to cover for low TwR. You can use multiple stages, you can refuel, does not matter what is inside. What matters right now is that your payload to low orbit became Mpayload + Mtransfer and that is effective payload of your rocket to Kerbin Orbit.

To get all of that hardware to orbit you need over 2500m/s for orbital speed alone, for big rockets you may as well take another 2500 for ascent. So you are stuck with designing lifter rocket with 5000m/s delta-V to low Kerbin orbit.

As to how to design lifter rocket in top-to-down approach you could refer to my previous KSP answer in "Sane career mode lowest tech levels", section "Lets build Mun rocket". If those crude designs are too primitive for your needs, feel free to throw another question.

So whats the deal with that "real problem" thing?

Long story short: tricks to increase delta-V such as:

can be counter productive as hit to ascent profile may cost you more delta-V than you got from creating convoluted design.

For reference take a look at Saturn V, biggest rocket ever, and it is "just" a tower of engines and fuel tanks. On other side of coin you have Space Shuttle, while astonishing achievement (they flew a cargo plane glider into space and back!), it was inefficient in many ways and very complicated. 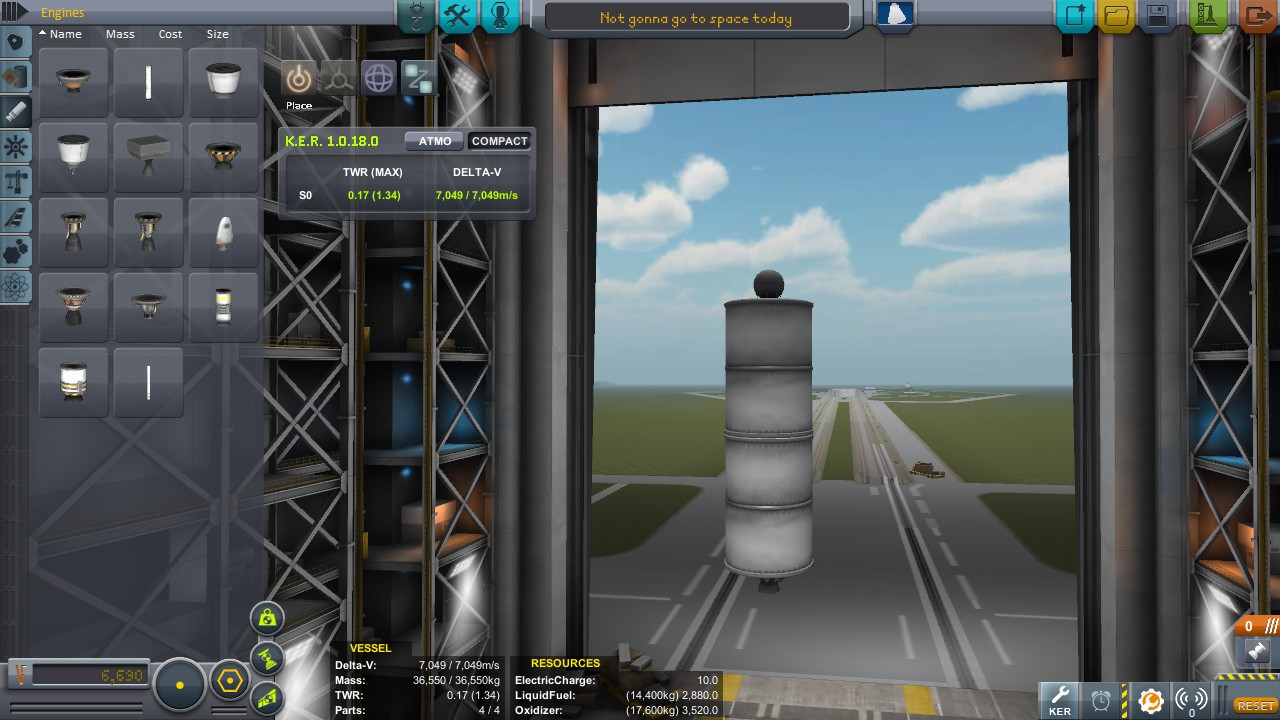 7k delta-V. But it won't even nudge from launchpad. 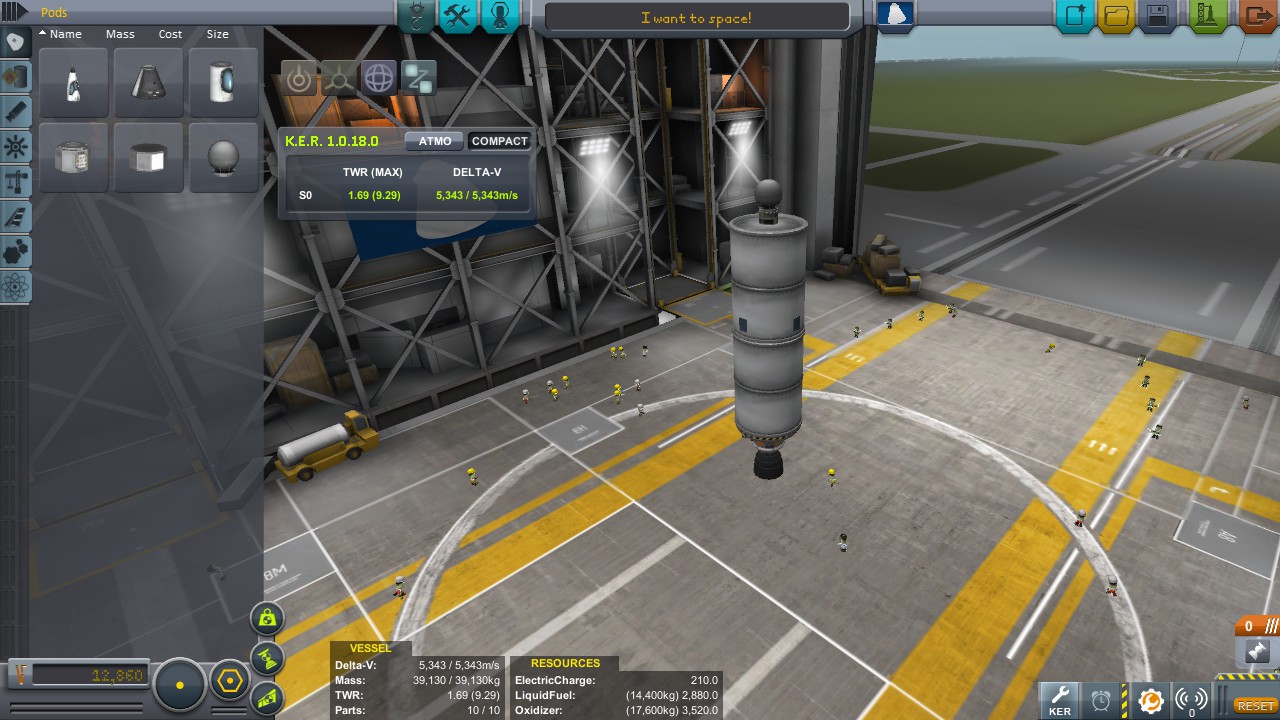 Lets fix issues at hand. Bigger engine and some extra parts. Ooops. It flies like a brick, 40 ton brick. We could fix it, we have technology, reaction wheels, RCS, SAS, winglets, struts... 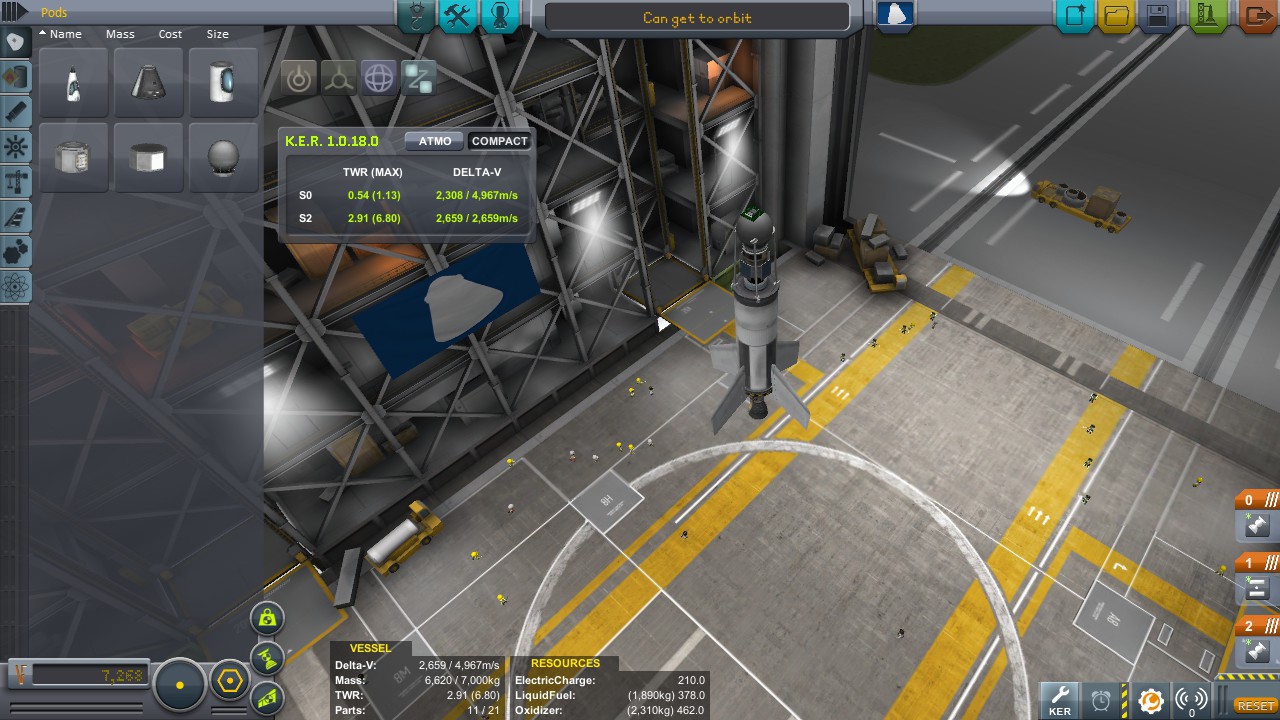 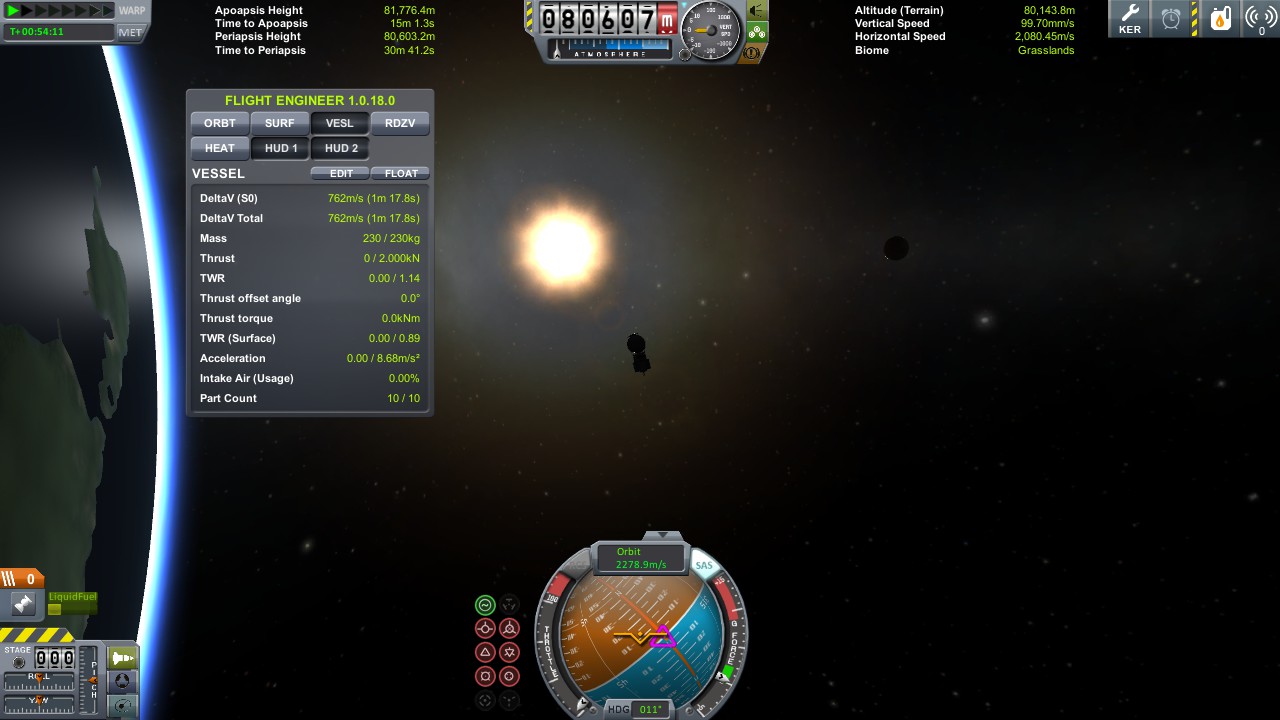 ...it actually can go to space.

Moral of this story: being big for sake of being big is a waste in space flight.

Lets get to that delta-V thing now.

7k delta-V is a wall for low tech parts, pushing over it is a waste of fuel

Increasing fuel load will give diminishing results with each tank because of physics and math. 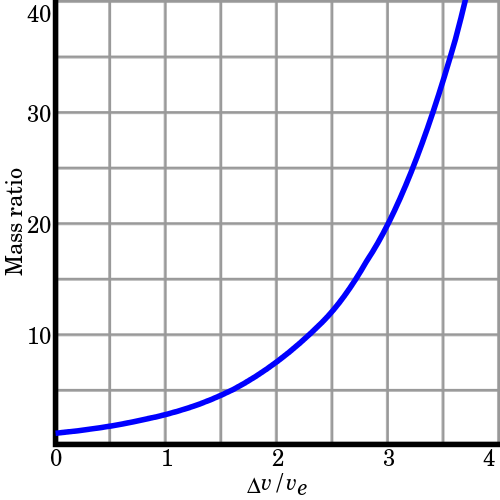 Each new fuel tank wastes rapidly increasing fraction of its load simply to move up rest of fuel (and itself). Increasing amount of fuel leads to increased weight which, given constant engine thrust, gradually lowers TwR to point where rocket turns into oversized oven. (Hint: ovens can't into space)

If you want to enjoy your time check out XKCD What-If "Voyager".

That's what doubling your range leads to in rocket design.

Now lets prove it experimentally with KSP (and KER mod)

Lets get some facts straight first:

For experimental proof I will use single engine design, whcih mass is getting more and more negligible with each next fuel tank, simulating decoupling of each empty tank to reduce dead weight.

Note: this design is only here to produce idealized numbers, for normal rockets results will be much worse considering that multiple engines, structural elements and payload are required. 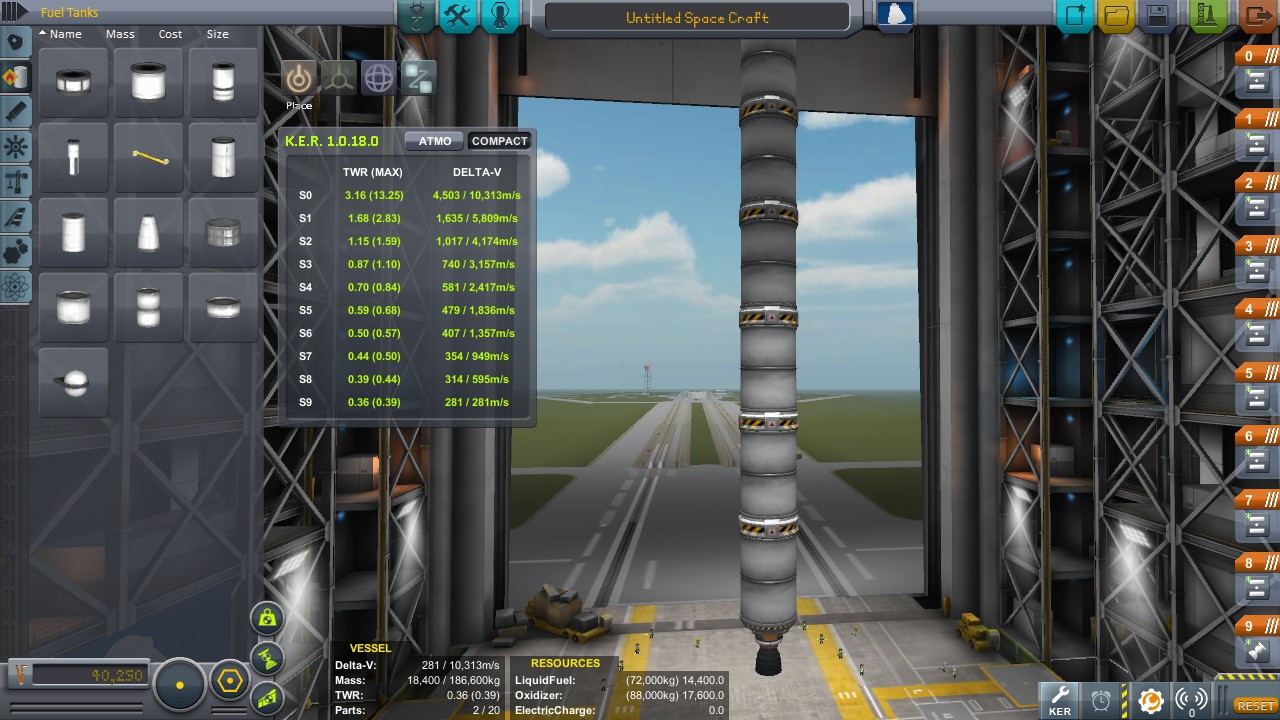 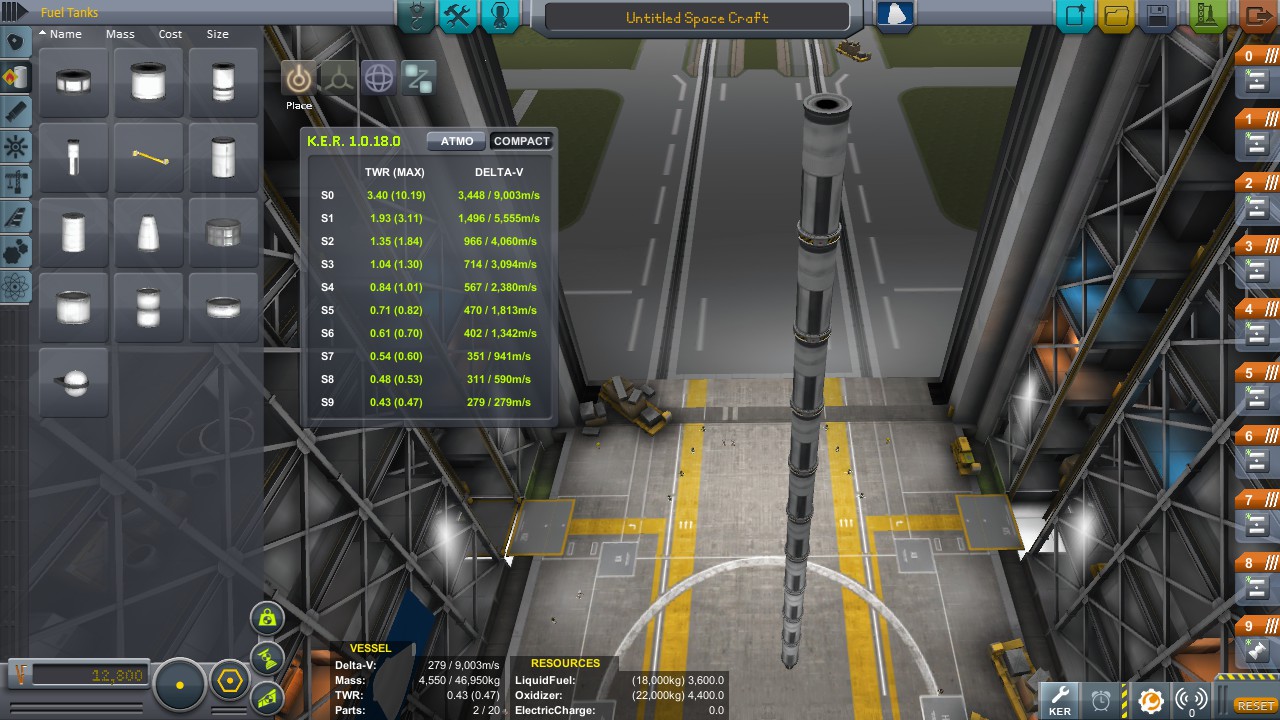 Downscaling further can increase percentage (309%), but at cost of total delta-V: 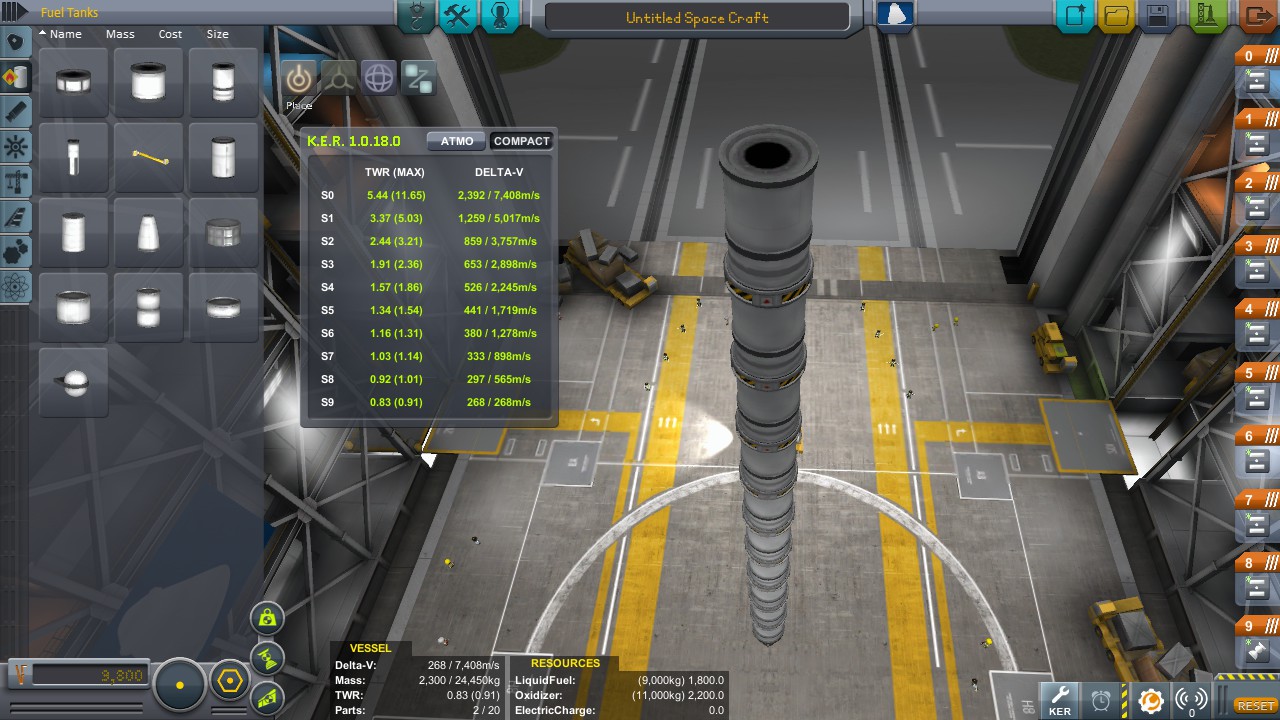 As you can see, even idealized 1.5 meter design will hit a wall around 7k.

In meantime TwR goes down and down.

Breaking 8k delta-V barrier, can it be done with low tech and 140 tons weight limit?

Yes. But it will stop resemble proper rocket halfway through design process. It won't fly like a brick. It will fly like a bucket of gravel. Falling apart, that is.

Note: following design was made when payload requirements were 2 tons, but principle should hold. 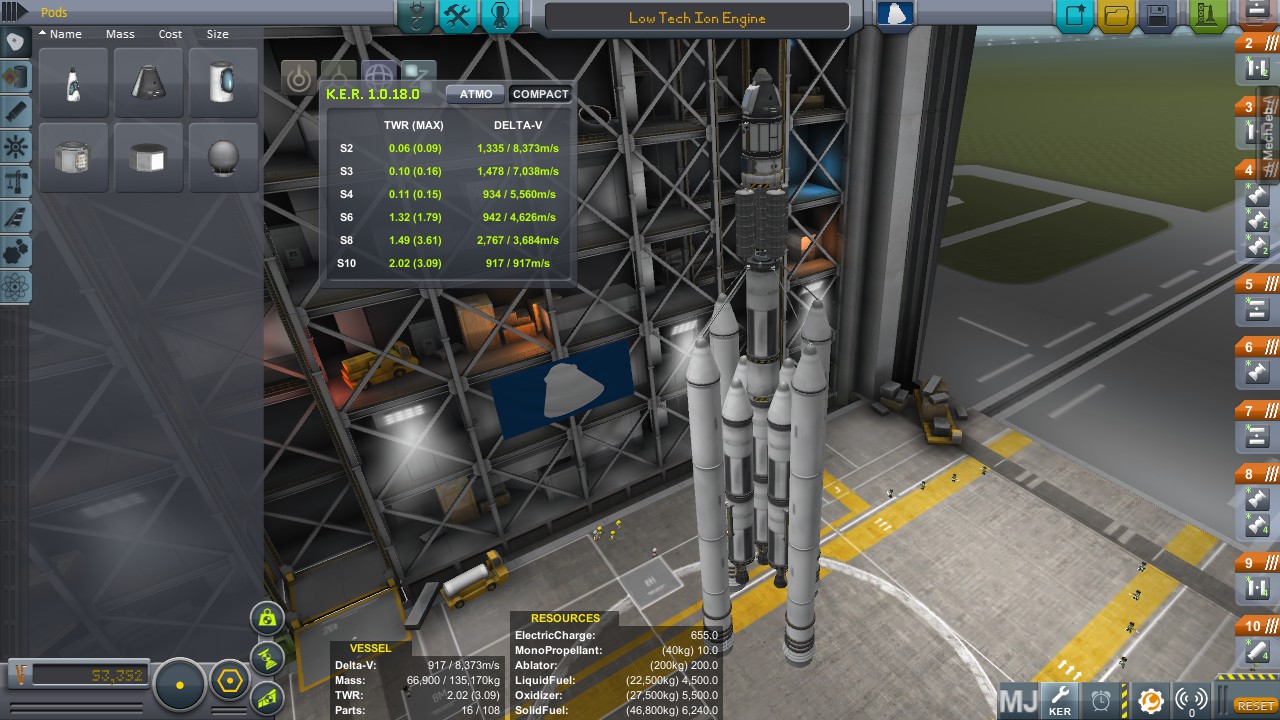 It is just a quick and dirty lifting rocket for delta-V abusive design of Ant-based "Low Tech Ion Engine". Although it tried to fall apart, as predicted, it required only 3900m/s to reach stable orbit. 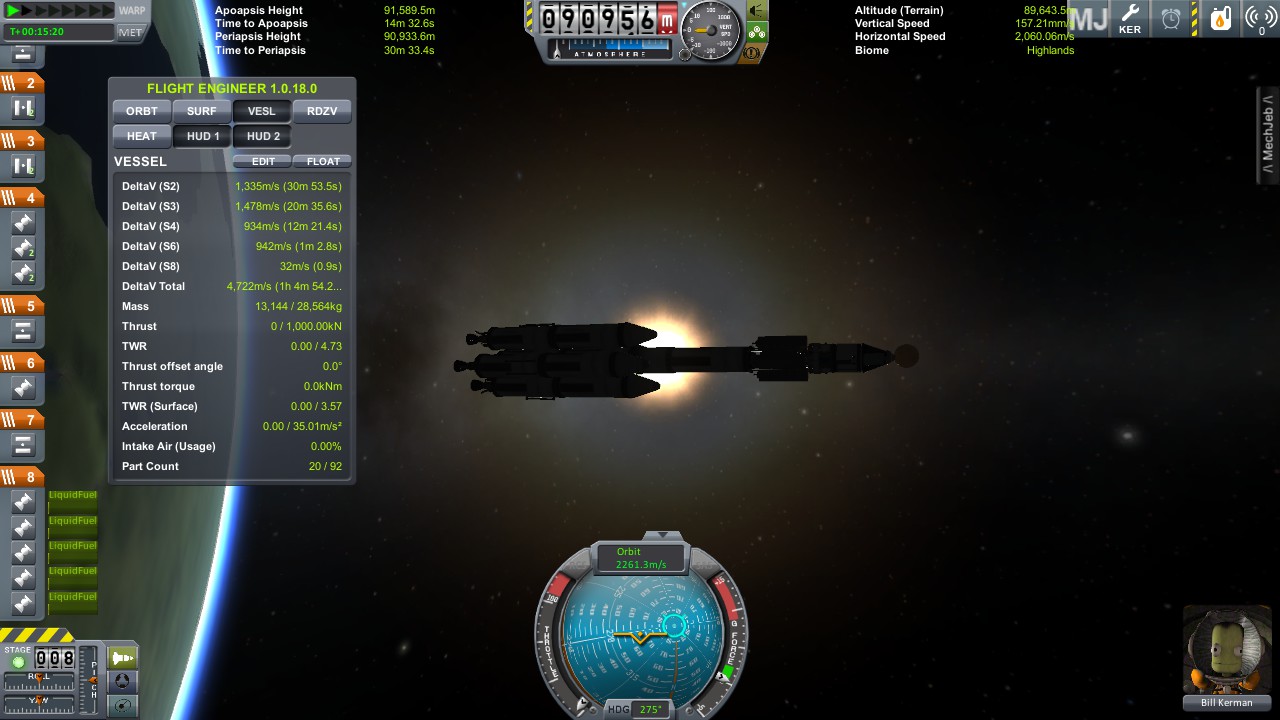 With some time spent MinMax-ing its design it should break 9000m/s, mostly by moving unspent fuel to final propulsion stage. Its delta-V is so high only because I "cheated" by creating low tech Ion propulsion module. ~0.1 TWR, over 1 hour burn time, for mere 3700m/s.

You wanted to learn some secrests? Here are two of them: 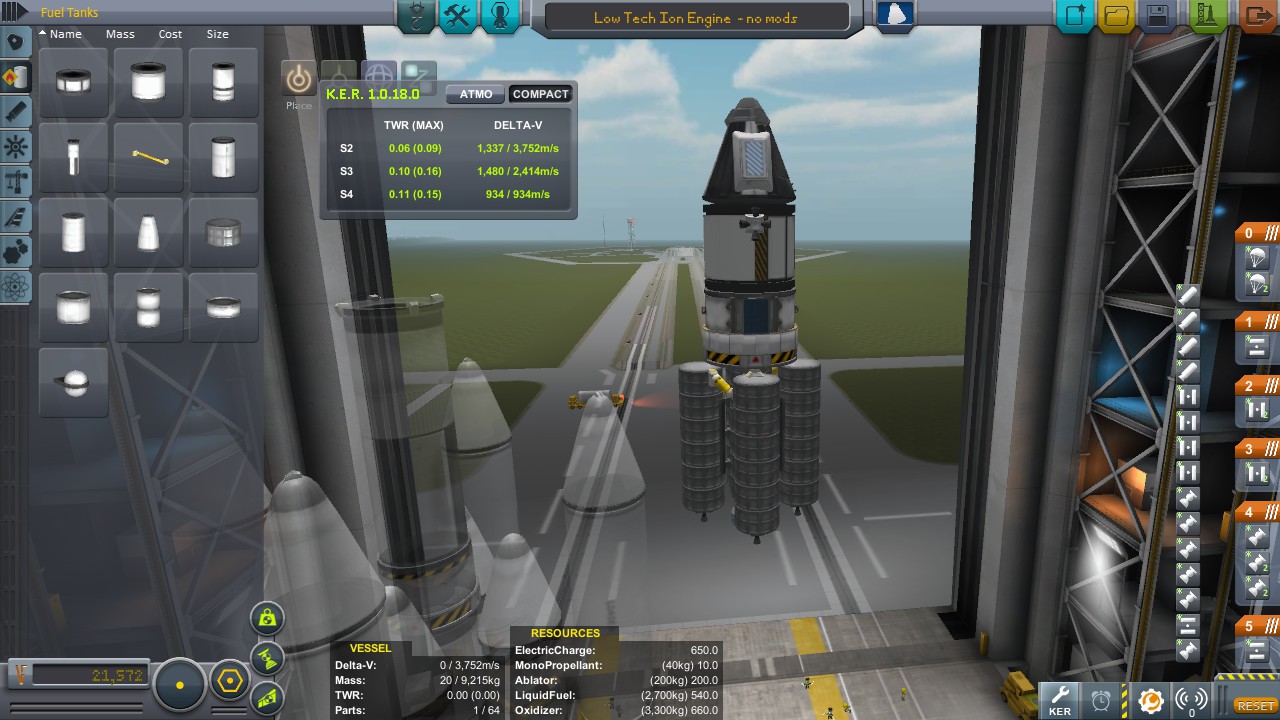 Note: Everything will change if you will use one (or many at once) of following:

Craft files are added to my SE.Gaming KSP repository.

The above answer already is excellent, but forgot one thing I might have added, that can also drastically increase deltaV if done.

Assemble your payload in orbit.

If your rocket is "limited" to a certain mass in payload, which translates into a certain amount of fuel for anything that goes from LKO to Duna or whatever, then why not shoot several separate payloads up, e.g. pure engine stage with moderate fuel, pure fuel tank, and command module with science stuff or whatever else is needed, and then dock them together in low orbit. The fuel tank can later be ditched if necessary or kept to refuel later.

This way you can combine a much larger fuel load with a given set of engines, command and control, and other payload (science for example), that can easily make it to duna and back. The entire ship can also this way be extended and modified in orbit by adding whatever modules are handy for the planned mission while the science is either deposited into a mobile lab, or the command module alone lands on kerbin (leaving fuel and engines in orbit to be reused).

Note that this plan may require a station in orbit for assembly and refueling of fuel tanks. (If not you need to constantly shoot new fuel tanks up)

19
Sane career mode lowest tech levels
2
Duna: Is it always more efficient to aerocapture than to do a capture burn?

4
How does the career mode change when you have unlocked the entire tech tree?
3
Do I have to land ships that contains parts I will not have access to, before updating addon?
5
Space plane take-off & landing using only basic parts?
4
When using Deadly Re-entry, how can I add heat shielding to unshielded parts?
2
Can't make sense of launch window planner results
1
What is the limit to the number of KSP installations I can have on my account?
5
Why is this mission not complete?