How do I test if all minecraft players on a server are in a radius?

This has got me. I need a command that tells me if all players on a server are in a radius of a command block. If one of them isn't in the radius, the command will be false. Any ideas? Thanks!

Use a command block with the command /testfor @a[rm=RADIUS]. point a comparator from the command block into another block, and on that block, place a redstone torch. This tests if anyone is outside of the radius, and inverts the signal, providing the output you want.

A block-updateless method would be to use 1.9's new command blocks with the "conditional" setting, as well as using /testforblock to check the success of a command.

To further reduce server strain, you can disable output tracking on the command blocks. Do so by clicking the "O" button in the interface so that it turns into an "X": 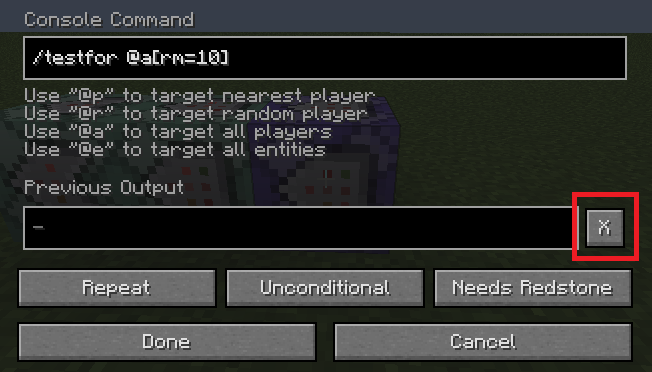 4
Output power if X players in radius Y around the command block
3
How do I target only players who are at a certain height?
2
How do I give an effect to all players that are not in the radius of 4 around my villager?
0
how to add multiple players to a level specific team in minecraft
2
How do I test for a player's xp levels in a radius of 2?
1
How to target a player that is both in a certain Y coordinate and in a certain radius?
4
How can I identify all players within a given radius of a player?
1
Affect entities/players in a 4 block radius without you getting affected