Who do the top scores refer to?

The top scoring players in Unikong can be (scores omitted as they don't seem relevant):

Inspecting the source of the game shows that "JON" is hard coded to be the top scorer and the remaining nine are randomly chosen from the list.

Are these "the trolls" mentioned in the ad? 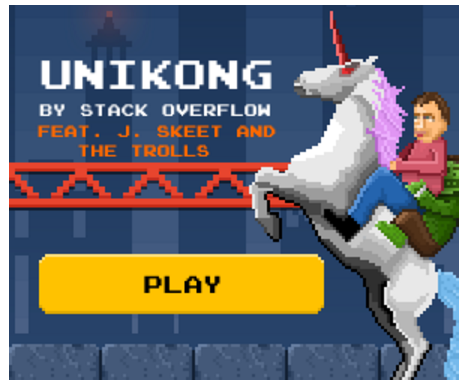 Do these refer to community members or to Stack Exchange employees, and if not, what do they refer to?

I suspect JON refers to Jon Skeet, one of the makers as well as the top contributor of all-time on Stack Overflow, but what about the others? They don't seem to refer to the other top contributors on SO or the moderators on SO. ALE may also refer to Adam Lear, one of the SE employees and developers of Unikong (mentioned in the credits).

You're on the right track - they refer to a number of other developers and sysadmins who work at SE. In other words, yes, they are the trolls.

You can work out most of the names with this handy guide.

And sorting based on information provided by @wythagoras' answer

the codes are sorted in alphabetic order on last name.

I present to you, the trolls (which fortunately appear sorted in the same way mentioned above):

To be more precise, the codes seem to refer to the first letter of the first name and first two letters of the last name of the employees in the Engineering section of the link in Adam Lear's answer. Also, the codes are sorted in alphabetic order on last name.

The only one that doesn't fit is REX.

Not the answer you're looking for? Browse other questions tagged unikong or ask your own question.

109
Can I ride the unicorn? If not, can I kill the unicorn?
15
Is the Konami code for Unikong inaccurate?
30
Can I unlock any badges on the Stack Exchange network by playing Unikong?