Does Satan's Hollow have an ending?

Satan's Hollow is a 1982 shooter arcade game from Bally Midway. The player uses a moveable gun at the bottom of the screen to shoot gargoyles flying around the top of the screen. The gun is also used to gradually build a bridge and thereby advance to the next level.

After completing each level, a white pennant is placed on a stack on the side of castle in the background: 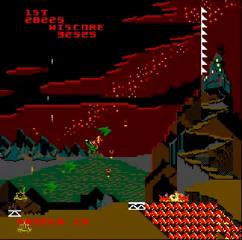 There is room for only nine white pennants, so after earning the tenth white pennant, all the white pennants disappear and a red pennant is placed on a stack on the top of the castle. The game then continues as before, with a white pennant being awarded at the end of each level: 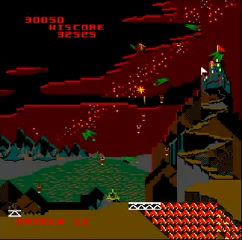 Judging from the size of the white stack, it looks like there is room for only six red pennants. I've played the game for a long time but have never been able to amass six red pennants. What happens when you win the seventh red pennant? Does the game end, or do you start a new stack of pennants of a different colour?

Does the game, in fact, have any ending at all, or do the levels continue indefinitely?

While searching for a definitive answer, I decided that finding a high scores list might be able to answer this question. I managed to find this thread, which is congratulating a player on beating the previous world record:

There is a link to another site that apparently has videos of the world record plays here. The comment on the top score (mentioned in the thread) indicates that he managed to score a ridiculous 789 flags before reaching a game over.

Another comment in the thread indicates that while this is the current MAME Action Replay high score, the world record lies somewhere in the 40 million range:

Looking at the TG scoreboard it looks like the score to chase is just over 40 million.....but due to the way Satan's Hollow scores, Ben might actually not be that far off.

Another person referenced the fact that this "Ben" has high scores at the Barcade in Brooklyn, NY. If this is true, then his high scores are indeed documented here. Impressively, the high score on Satan's Hollow is even higher than the "just shy of 11m" referenced in the thread:

While these scores seem absurd, I found second reference to the 40m score in this article:

Based on all of this, I think it is safe to say that Satan's Hollow is, indeed, an endless game.

Not the answer you're looking for? Browse other questions tagged arcade satans-hollow or ask your own question.

1
Does Radikal Bikers exists for PS3?
3
Do the characters in the classic X-Men arcade game have different fighting capabilities?
4
What level does the winner start on?
2
How does scoring work in Танкодром (Tank Training)?
5
How can I check which model of Neo Geo MVS do I have?
18
Do the enemy that appear in arcade game when running out of time have a canonical name?
2
How does Rambo Arcade's light gun work on an LCD screen?
4
How can modern Arcade machines have thousands of games while the originals could only hold one?