How to design heavy lifter rocket

I'm building a space station that will make a trip to Jool, collect science from its moons and return. Here is my reusable science module (2600kg): 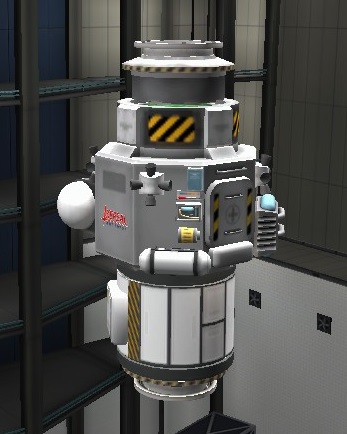 I tested my Laythe lander in Kerbin. The lander was able to leave Kerbin and stay in orbit with 2600m/s left in the tank. This is the lander with the science module: 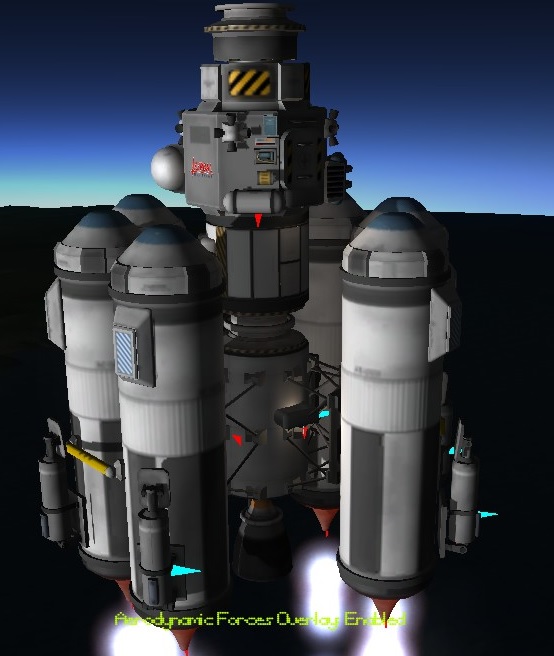 8 tanks in asparagus around a nuke + science head, total of 56000kg

The problem is, I can't manage to bring this module to the space station!

I already tried many configurations, including sending the science module first and then the other part, but they all failed. Here is my last failed attempt: 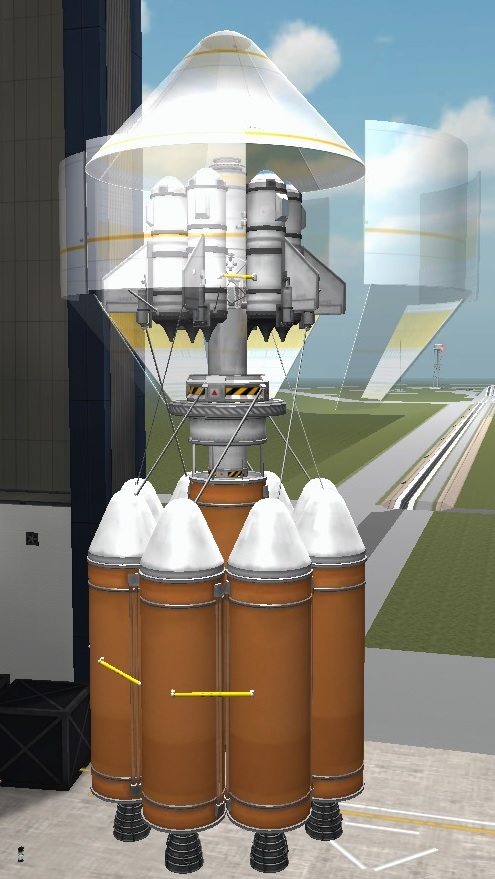 What kind of configuration for a lifter would make me able to bring this 56000Kg to my space station?

It is impossible to give precise cutaway point for heavy rocket, but there are several properties you might notice in them:

What do I need to design good Heavy Lifter rocket?

Imagination - you are leaving area of sane engineering, there is no connection to real life rockets anymore. Think big, think boosters.

Engineering mods - Knowing how to do rocket math is good. Doing rocket math on your own is a waste of time. KSP "physics" is quite different from real world, so real tools are mostly useless. Numbers and equations are bothersome to extract from game and online tools tend to be obsolete. However there are several mods that will greatly help with engineering:

Note: All suggested mods are either working in KSP 1.1 or will be updated shortly, are in active development and work fine on 10 year old laptop ;)

At certain size aero-braking (it occurs on ascent as well as on descent) stops being effective. Long story short, it is exposed_surface * atmospheric_pressure * rocket_speed versus rocket_speed * rocket_mass. Rocket mass grows faster than its exposed surface so after breaking 100 tons air stops being a concern. And rockets tend to leave low atmosphere rather rapidly anyway.

Additionally big rockets will benefit more from stable thrust than from fuel efficient engines, so this point can also be ignored.

Note: You will need very high thrust unless you will perform aggressive gravity turn. I picked gravity turn as question implied Career mode, where funds are limited.

Note: I planned to turn boosters into drone-shuttles capable of controlled descent, initial tests were promising.

Note: do not bother with limiting throttle in low atmosphere (Limit Q in MechJeb). For rocket of such size it will actually yield worse result than full throttle all the time.

Its too strong! 4:1 TwR is a bit high, maybe we do not need Rhino burning all the time? When Rhino got ignited after boosters were detached, rocket reached orbit with 350m/s in tank. We learned that we have too much fuel (dead weight) and too much thrust (dead weight in engine mass).

Not using engine is making it into dead weight, so lets shuffle some thrust from boosters to center (Rhino = 2xVector, Mamooth = 4xVector). We can also try to turn boosters into fuel tanks for central stage with fuel lines. 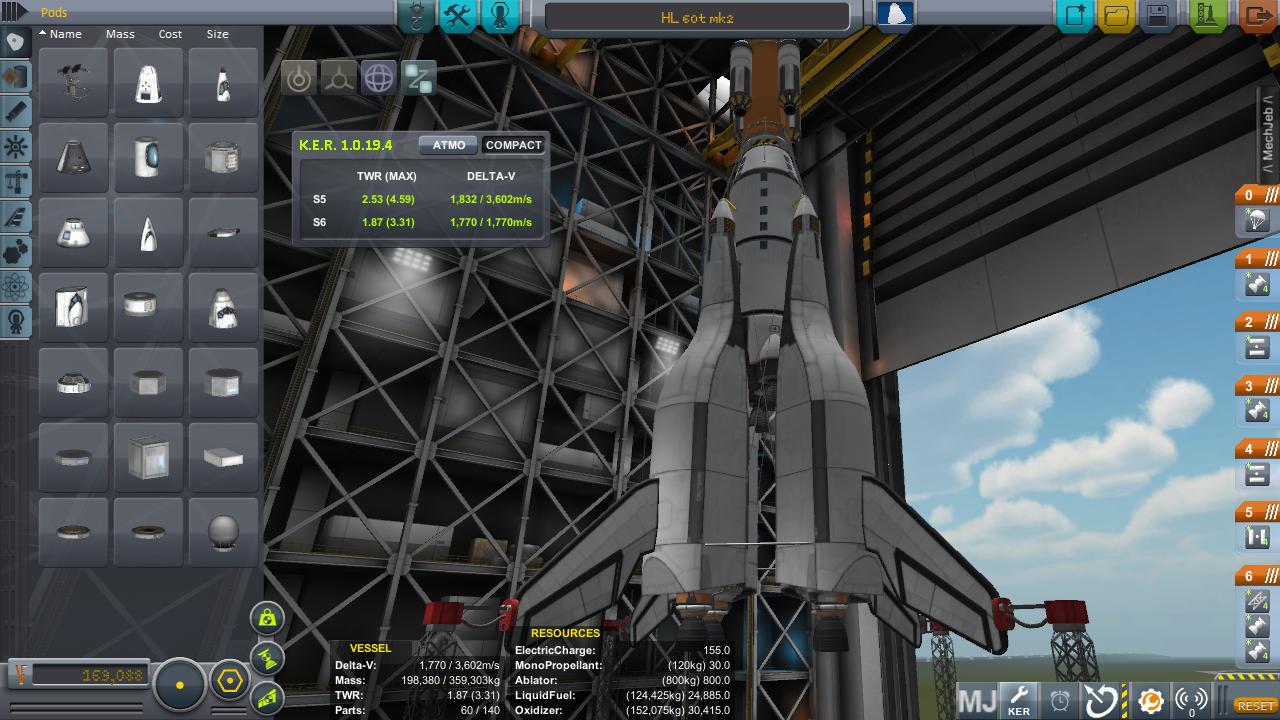 After switching engines it will reach orbit with 190m/s in tank. We also dropped price from ~350k to ~160k. (1xMamooth+4xSkipper)

Can we go further? Yes, yes we can.

By performing gravity turn we remove need for turning rocket around rapidly, and after many test flights we know this design is very stable. No need for SAS and wings. No SAS means no need for solars. By increasing boosters thrust we can decrease main stage thrust (5xMainsails this time). 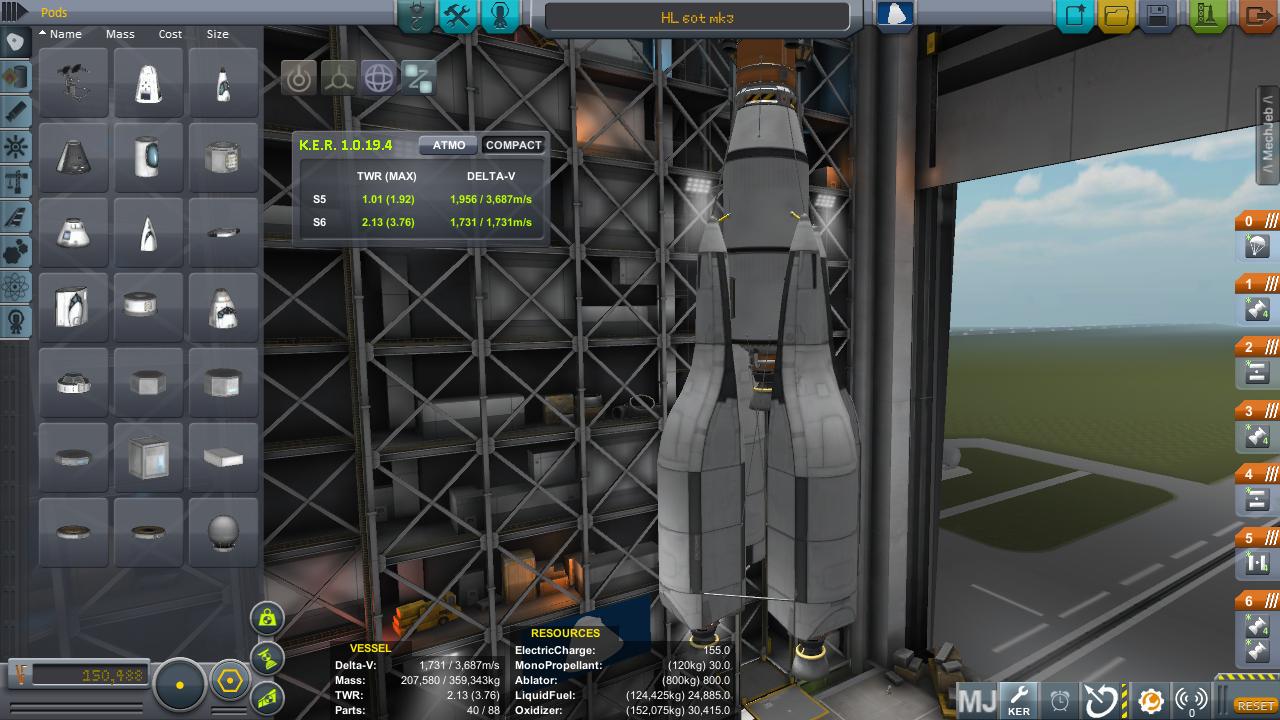 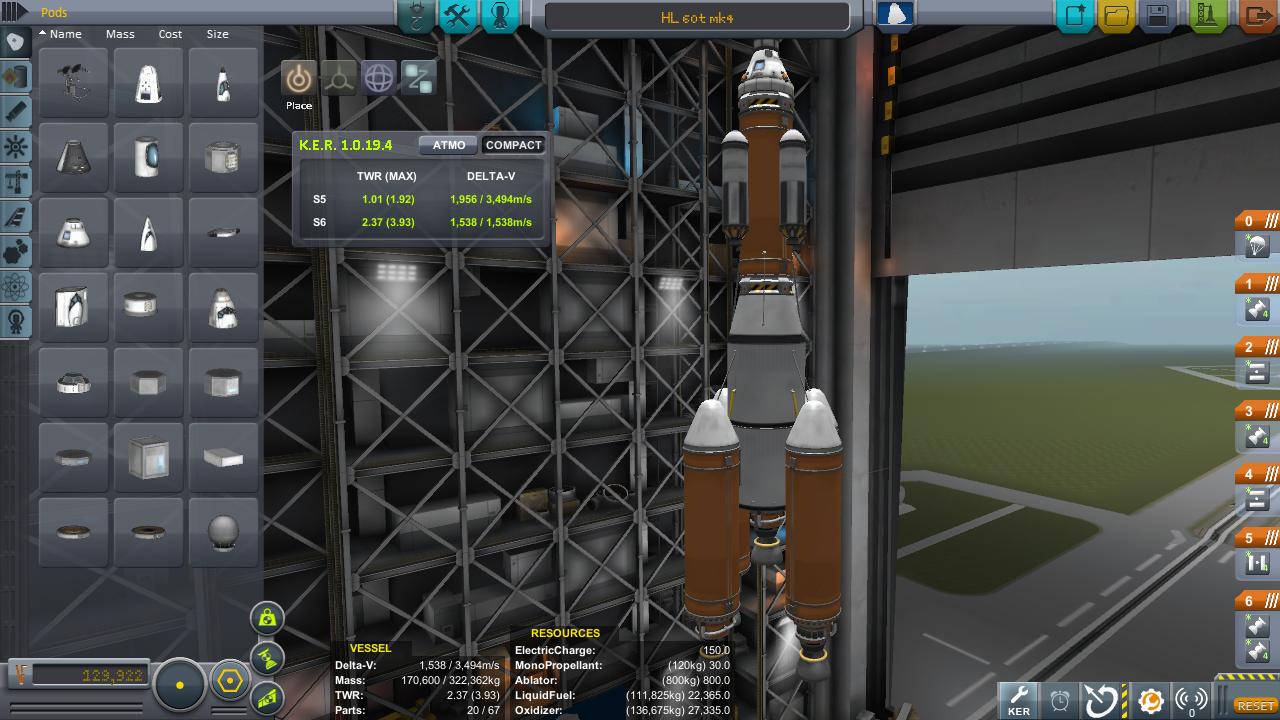 Over 300m/s left in orbit. So we can downsize a bit more. 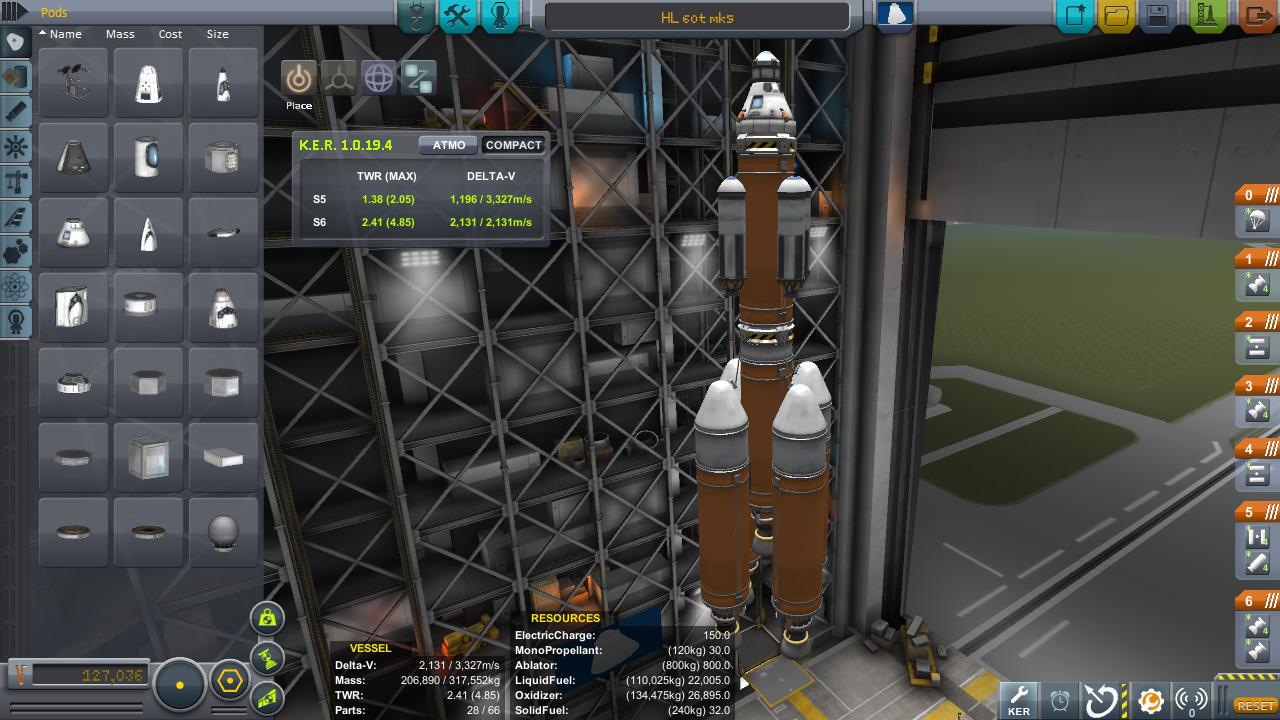 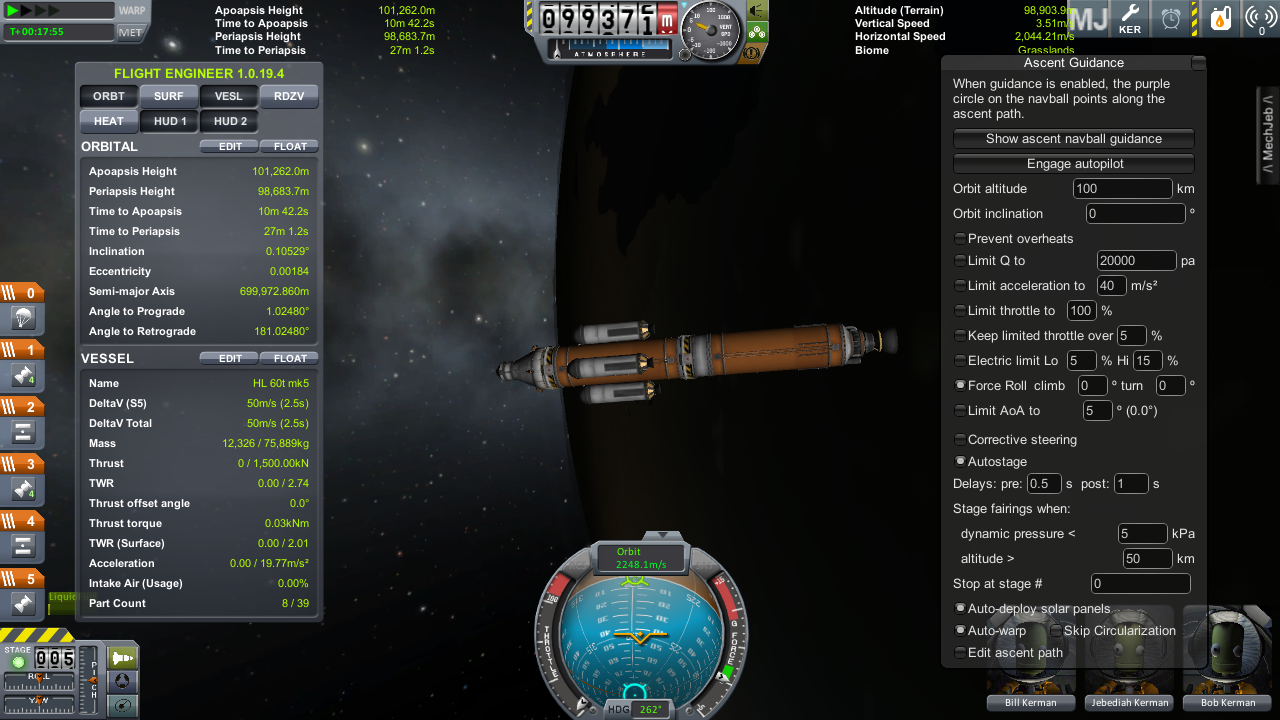 And here we will end after ~40 launches (wouldn't bother doing it without MechJeb and ALT+TAB ;). Lifter price dropped well below rewards from missions requiring such rocket and as a bonus we dropped to tech level 6.

Hint: If you plan to launch manually, better add some spare fuel. Thrust margins should allow for ~10% increase in Delta-V.

Note: Record payload mass ratios for rockets in KSP are around 25%.

As always, designs can be downloaded from my SE.Gaming KSP repository.

I got the idea to add the lifters below the payload rockets after watching Scott Manley video. And thanks for the great hint from @PTwr to empty the fuel tanks

Here is the solution: 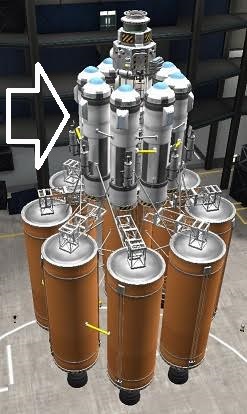 NOTE: In this very specific case, the science module is a reusable detachable part, so it should be delivered separated from the rest of the body. It would spare an extra 2.5 tons from the entire payload.

Empty the fuel tanks of the last stage and launch it into a low Kerbin orbit.

Then launch a second rocket which is just a large fuel tank, dock it with your first stage and use it to fuel it.

You can also launch and attach additional fuel tanks to it. You can then drop these one after another during the mission as soon as they are empty.

6
How to control the Rocket Powered VTOL?
2
Move kerbals in KSP - to save Jebediah from an unjust fate
10
How can I get science from my space station to cash in the points?
3
Same rocket, different payload?
3
Why can't I move my unmanned rocket?
7
Why is my rocket drifting north?
6
How to control a rocket?
4
Can't straighten rocket components
56
My large rocket is still flipping over
1
How to stop spinning rocket in space