Chances of Hidden Ability through breeding, as well as chances for gender

Is having a gender specific Pokemon a deciding factor if the egg would be a male or female variant?

Is having a gender specific Pokémon a deciding factor if the egg would be a male or female variant?

No, each Pokemon type has a specific ratio to be a specific Gender. The most common is a 50/50 chance to be either Gender (which your Ralts has): 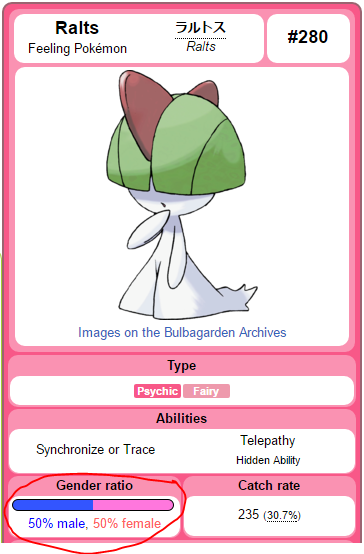 You should have a look at Bulbapedia's Breeding Guide, as it covers a lot of ground about Egg groups, getting Egg Moves, Hidden Abilities, IVs and other useful info.

Not the answer you're looking for? Browse other questions tagged pokemon-sixth-generation .