I am considering using enforce culture on the kalmar union (sweden and norway). I am denmark overlord.

I plan to get the influence idea group for the diplo-annex (also work on integrate) cost benefit regardless.

Spend 144 diplomat monarch point on Norway now for one extra point per month bonus toward integrate later on.

I have both personal union at zero liberty desire which is oddly refreshing!

Is it worthwhile to do it?

Edit: Forget to mention that most of sweden/norway have not changed much. I did take danzig/memel/Neva for trading money. Also so I could start on integrate Norway after vassal diplo-annex. Depending on how thing fare. I may even take lubeck and Riga in a no-CB war on Riga (trade league members no CB doesn't pull in Austria!). Also Poland got the PU over Lithuania. 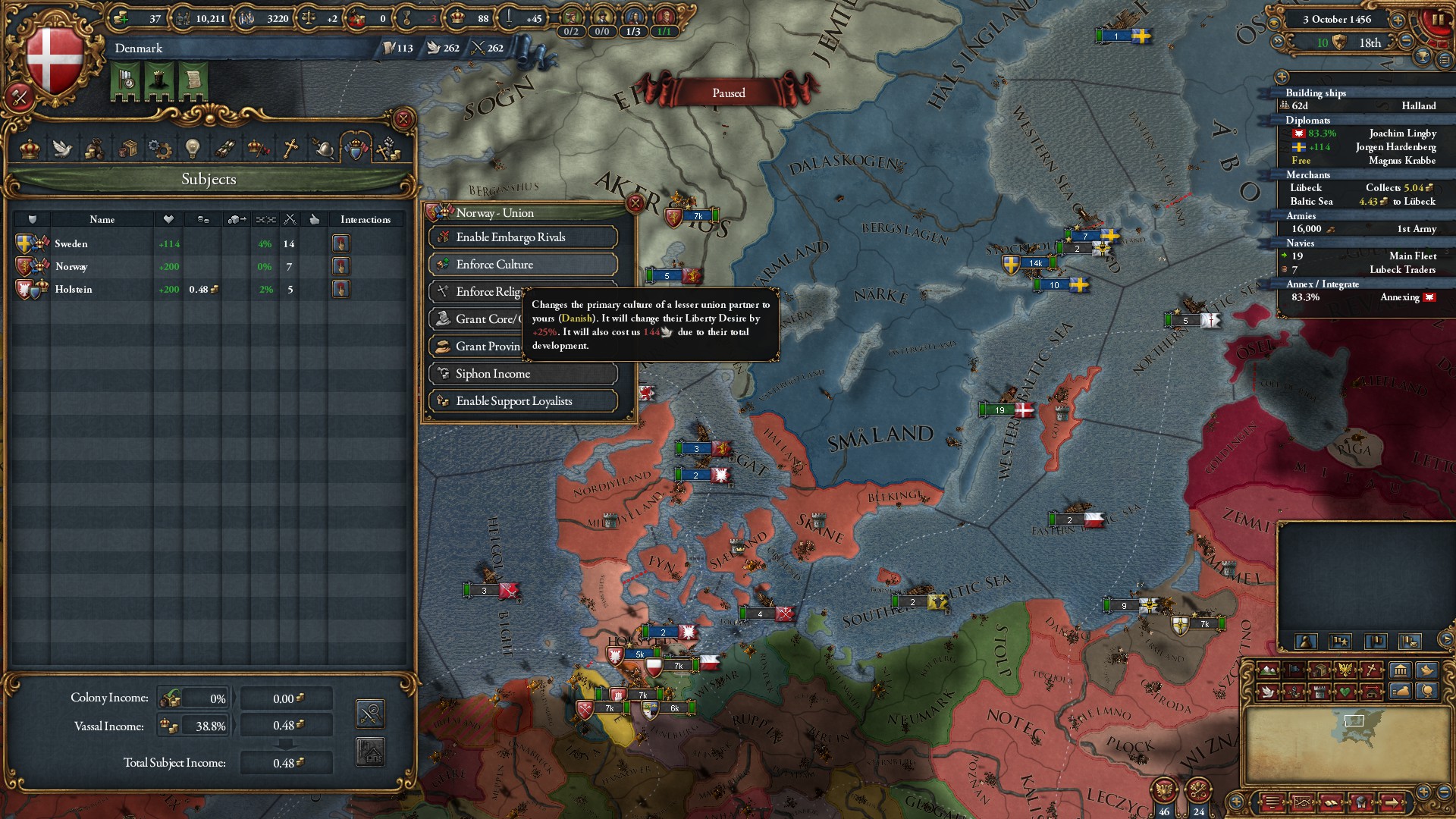 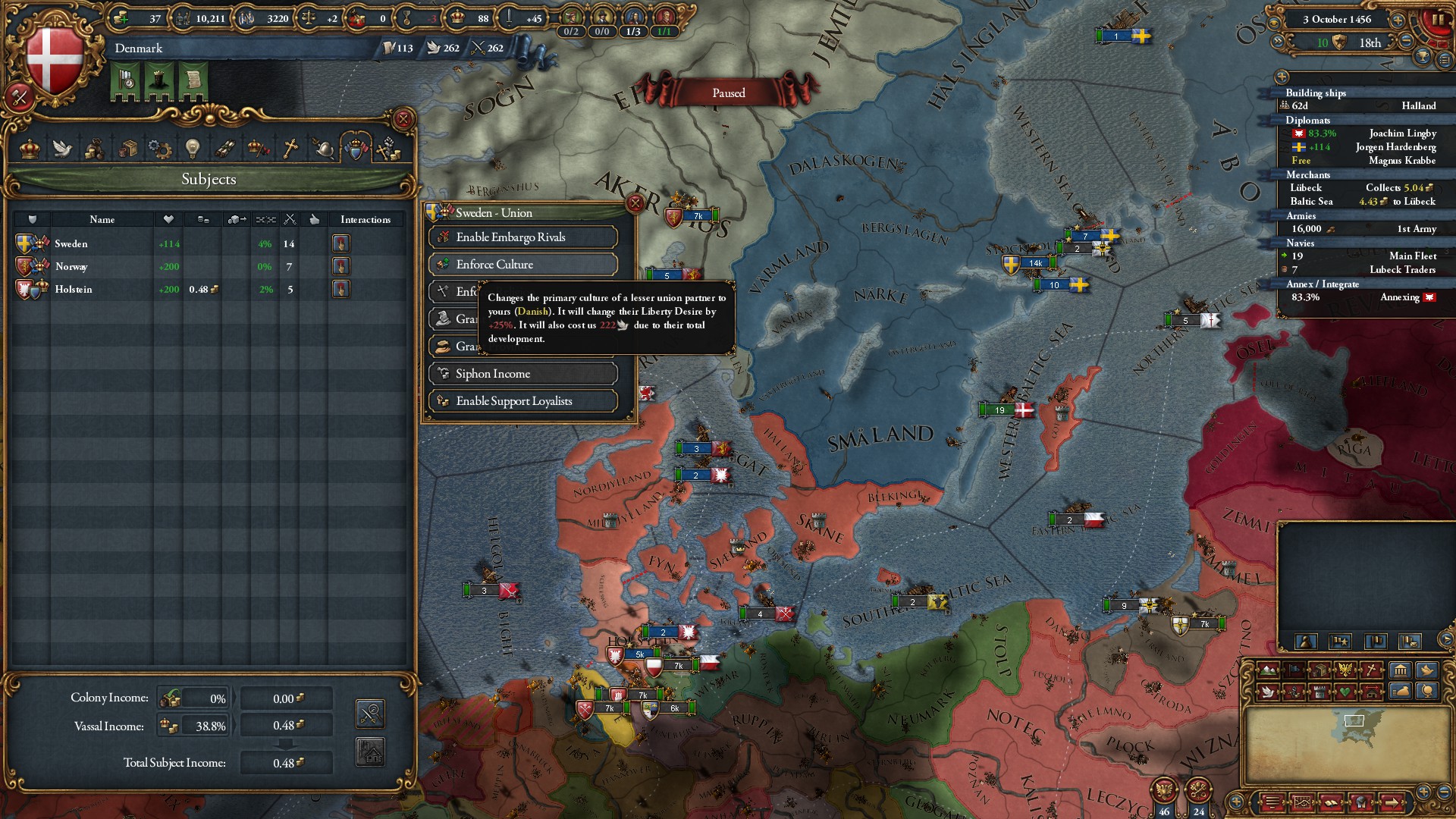 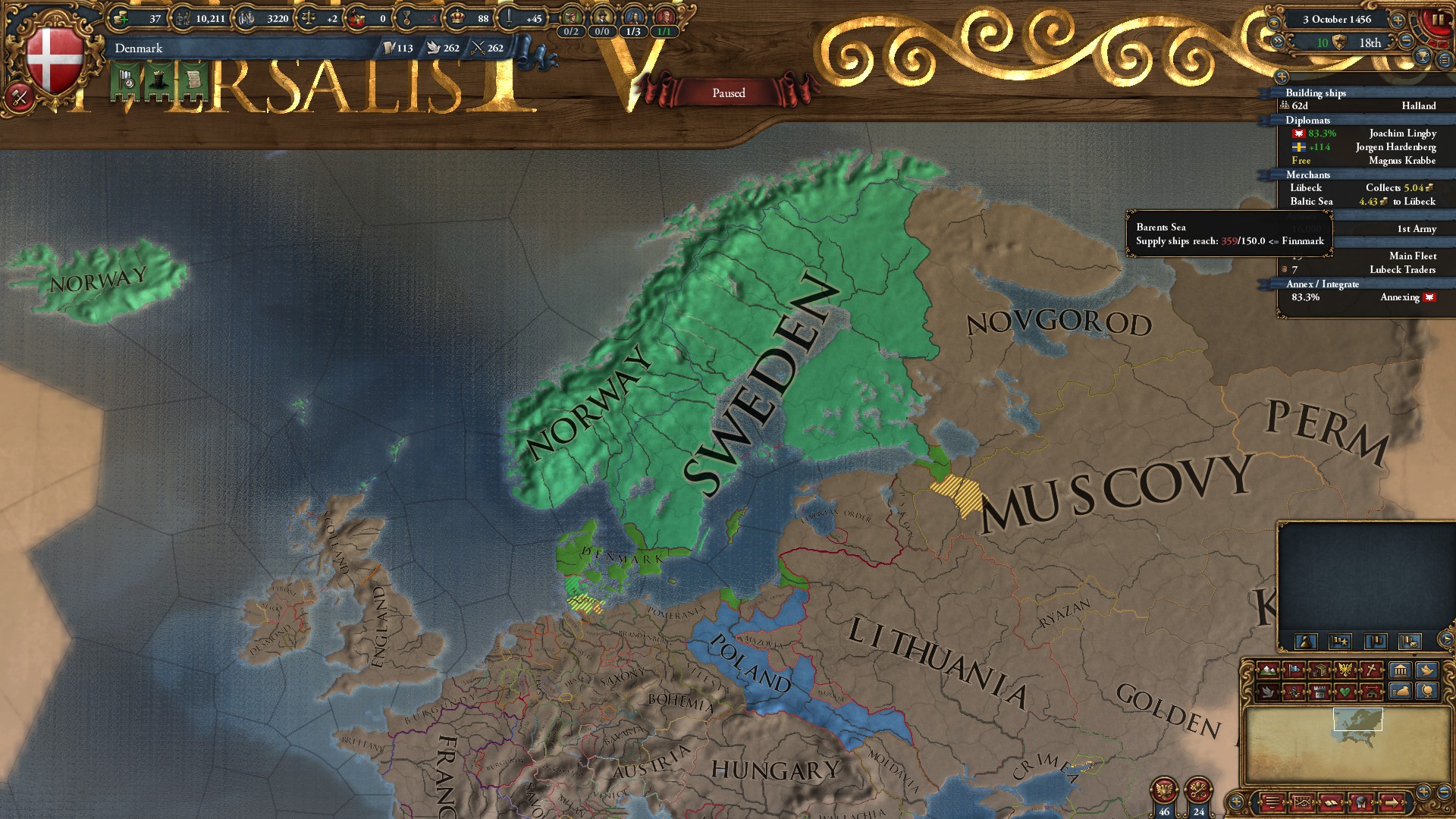 I have some more addition info on integrating. Not much but some.

At 2.64 reputation (rounded up to 3), 2 baseline, 1 same religious, and last but not least 1 same culture. Add up to about 7 diplomat cost per month. I could raise reputation by another 2 from influence 5th idea.

Notice: I used the reputation via catholic Papal's influence and increase relationship to 100 mission to gain another reputation. I also had about 82 legitimacy which lead to the .64.

I completed the third influence idea which gives 25% discount which is already baked in the following numbers. Perhaps I should have take the number before I completed that discount. Oh well no matter. Can't go back in time ironman. Still I did manage to reverse engineer the non-discount cost.

At 7 diplo-annex it takes 5 years and 5 month. If I reverse engineer the diplo-annex total cost going from that. It comes up to about 450 max.

In-game number is 450. We will onward use that 450 and round up number in a lot of places since that how it works in-game by paying per month.

If I continue using 450 at 9 reputation per month. The time to annex is as following.

Now if I go back and take the one culture off the top using 600 number and 6 per month. I can figure out the time it takes if I didn't enforce union.

If I had 9 reputation (with 5th influence idea) the time will be:

67 (again rounding up) / 12 = 5 years 7 months. Clearly there is a somewhat diminish return the higher you go regardless of the total cost.

It depend on if your ruler is lucky and have high diplomat skill. I say go for it. If nothing else especially if you are diplo-annex someone with high developments. This is of course assuming that somehow I maintenance 9 reputation for more than 5 years (unlikely since some reputation are temp boosting) so don't take what I say here literally and figurative.

There are other factors that make this more complex as well. If you just happened to fully integrate from the monthly chance to inherit at the first month. All of your investment would have been for naught.

Only do enforce culture if you have surplus diplomat monarch points and plan to keep both Norway and Sweden under PU until integrate. It will not always be the best thing to do every-time.

1
What is the benefit of Accept Culture change?
3
Is there any way for the Evangelical Union Event to not fire even when there is a Protestant Elector?
3
How to benefit from personal unions
5
Is it a good idea to accept a culture shift from Kamchatkan to Japanese for the events?
4
Why is Scottish not an accepted culture in Great Britain?
6
How to actively prevent becoming the junior in a personal union in Europa Universalis IV?
3
Do formable colonial nations depend on the culture of the colonizer?
6
EU4: Why is my personal union ending?
2
Roman culture for converted CK2 game
2
I become personal union overlord of stronger country - what to do?