What all can I find in the End City Chests?

In Minecraft 1.9, the End City has been added to the End dimension. In some buildings, I find Chest(s). they contain various items - gold, tools, armour, ... I was told that an Elytra can be found there.

What all items can be found inside a End City Chest, and (if possible) what are the chances of finding it? Also, what is the rule for what enchants will the tools have?

Probably complete list what to find in chests is here: http://minecraft.gamepedia.com/Chest_loot

This info should depend on default Loot Tables, and it can be changed through making new loot tables.

Enchantment probabilities are the same as a level-20 to level-39 enchantment would be on an enchantment table that had no cap at level 30, and that was able to apply treasure enchantments.

Elytra cannot be found in a chest, but in Item Frame on some endship located here.

I have been in end city's before, this is what I remember that's in them!:

Well the 2 bullets I just stated are found in a room in a tower. This tower, is a huge basically pipe with end rod and (some) block parkour. It is hard because there is a ton of Shulkers that infinite shoot you with their (I like to call them) "cores". There "cores" are balls of white that give you levitation when hit. It is hard because When they hit you, you have 3 seconds to get to a end rod or block before you have to start over again. So, as I was saying, There are bridges to rooms that you get to from the tower. Again, guarded by Shulkers. In these rooms have more, Shulkers that have a chest. In that chest have the Enchanted Armor and Weapons (I believe all new and no about to break stuff) which I think is pretty OP stuff.

How to get elytra? Well there is only 1 in the whole end city's. There are a few end ships floating around. No one can be specific of what end ship has the elytra. So, in the random chose end ship Go to the basement, and there is a item frame that has only 1 elytra on it. Grab that, and you just had a incredible vacation to the End!

Ok, just to add more info the answer of Antoine Hejlík, I post this screenshot (Source): 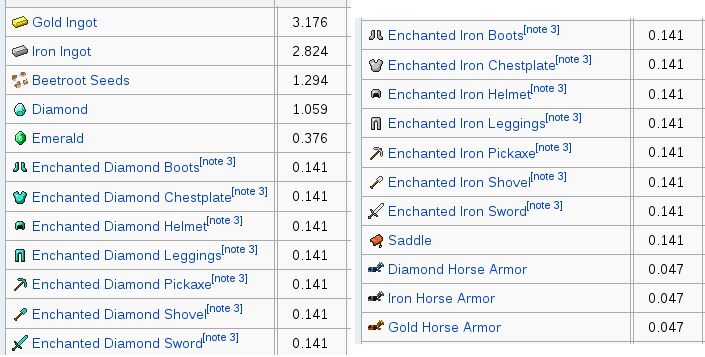 [Note 3] means the the item has/can have a random enchantment from a randome enchantment level from 30 to 49 (that is, can be enchanted to some unique enchantments, like Mending)

End city loot is, in my opinion, the ultimate source of treasure for the player who has successfully beaten the ultimate boss. As mentioned earlier, you can find the elytra in one of the ships. In the chests located within the towers, however, you can find extremely good iron and diamond armor and weapons, much of which has the mending enchantment.

When I went into an endcity last time, I found some awesome loot, like: enchanted iron armor and tools, enchanted diamond armor and tools, diamonds, iron and gold. They often had cool enchantments too. On endships, you will find an elytra on an item frame, brewing stands with health potions, and loot in their chest (for instance, I got diamond horse armor once).

3
What are the max ores per hour using branch mining in Minecraft that you can mine?
8
What items can be compacted into blocks?
5
How do I increase my chances of finding a nametag?
4
What are the different spawns of end dungeons?
3
End data folder location
5
Can I make an Enchantment table which can enchant to higher levels then 30?
2
What are the chances getting enchants using level 39 in an Enchantment table?
1
Where can I find chests in Woodland Mansions, and what can I find in them?
17
What are Iron nuggets and what can they be used for?
2
ArmorDropChances Data Tag below 0.1?