How can I make other empires like me enough to join an alliance?

I know that much of the initial scoring is based on the traits (Xenophobes don't like anyone, certain traits rub other traits the wrong way), but what actions can I take to positively influence potential allies?

Many of the options available to me are mood killers, and are great for cajoling them into being hostile enough for open warfare (including just existing near their borders). By comparison I just don't seem to have the have the tools to push an empire those last few points towards accepting an alliance; I can only make so many lopsided trade agreements before it bleeds my coffers dry (and I'm not sure multiple such trades have much effect), and I have a limited number of embassies to spread around. 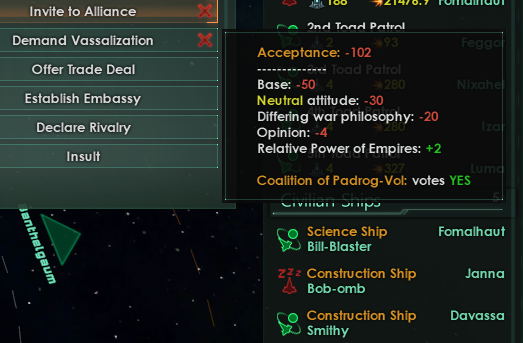 (This is not the empire that's only a few points away; that empire got snatched up by another alliance, and their 'acceptance rating' now has a -1000 attached to it.)

So there are different methods of increasing relations with other empires:

S.Wessels's answer hits several points, but note also the "relative power of empires" modifier. Other empires will be much more willing to enter in an alliance with you if you're stronger than them.

If you Guarantee the Independence of another empire, that will put you on the hook for some defensive wars involving them, but will boost your relations by 25. (You can make this less of a strategic loss by going for a mutual guarantee of independence, which is sort of like a defensive alliance.)

4
How to overcome 'Differing war philosophy' to create an alliance in Stellaris?

5
How can I get my ally to like my potential ally in Stellaris?
4
Stellaris - How can I move my civilian (scientist) ships to other empires territory?
6
How many colonies can be put into a sector?
20
How to get other empires to agree to "demand vassalization" peacefully?
4
How to overcome 'Differing war philosophy' to create an alliance in Stellaris?
2
Why and how often do AI Empires change their names?
6
How should our glorious civilization incorporate two neighboring fallen empires?
5
How can I upgrade a gateway?
5
How can I see the claims of my ally?
2
How can you create a hive mind race?