In SimCity, when I zone land for residential, commercial and industrial, sometimes there is not enough space at the end of the zone to fit another building. Occasionally, these little strips of land appear, sometimes with a building or a fence. You can not click on these but you can destroy them. I have not found any information about them. Could somebody enlighten me?

Here is a screenshot that I found online: 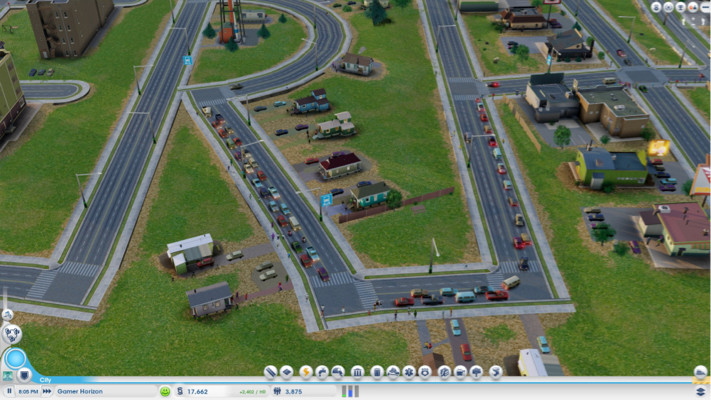 I don't think there's an official name for these things, but I call them "filler" or "junk". They appear when the game doesn't think there's enough room to put an actual building there (most obvious in industrial zones, given most such buildings need more room to exist).

They have no function and no purpose aside from making the land look less empty, but they can affect the logic of placing new buildings - if you're unlucky, a new or upgrading building will avoid running them over, which can result in an inefficient packing. In fact, in my experience, the game loves to put a single industrial building in a block and fill the remaining half with two units of junk, before it tries to fit a second building in there. It's a pain.

You can bulldoze junk with no penalty in an attempt to make the game try to fit an actual building there, but chances seem about 50/50 that a new piece of filler will just pop back up, and you have to be careful about accidentally destroying an actual building. They can go away on their own but to be honest I've never caught it.

15
Do I have to monitor the junk that fills in empty space?

14
Does the capacity of the road influence how many agents can travel down it simultaneously?
13
Is it possible to fill abandoned buildings in SimCity?
9
What's a good strategy for dealing with traffic?
15
Do I have to monitor the junk that fills in empty space?
3
How are goods consumed in SimCity(2013)?
1
SimCity 2013: is the truck shipping bug fixed?
4
Is there a way to see a Layout Grid in Sim City 5?
3
Was Simcity (2013) fixed?
2
Simcity 2013 - Space Center Oil Problem