How does Wheatley recover after GLaDOS's crush?

How does Wheatley reassemble himself after GLaDOS crushes him when she awakes? I have looked all over chapters 2 and 3 but I must be missing something.

It doesn't. You'll notice that since then, Wheatley's eye appears cracked. Take a gander. 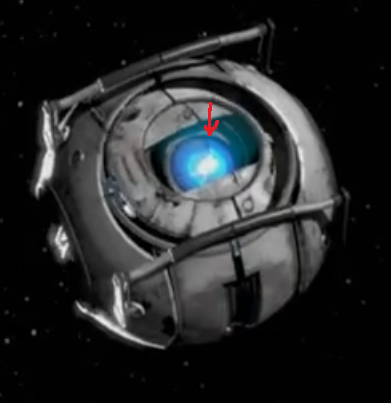 When you first see him after he is crushed he rambles on about something while you jump up and down to hear it. I always assumed that the game developers intended to give you the impression he was telling you how, but he didn't realize you couldn't hear him between jumps. I think they did it this way to develop his character as someone who was incompetent.

What's interesting is that in "The Final Hours" they reveal that for the longest time they were going to have Wheatly die off when GLaDOS awakens, it's only in the last year of development that it was decided that the character should live and take on a larger role in the game.

While Wheatley obviously sustains some damage from GLaDOS's rough handling, he's not actually offline when she discards him and tosses you into the incinerator. As Wheatley's line in this video suggests ("There I was, just lying there, you thought I was done for, but—"), he's just playing dead.

You also see visable signs of damage on wheatley after his escape from crushing, He sparks a bit and his movement is a little jitty, Also his eye is cracked.

He rambles on about how he escaped in the test chamber with the broken faith plate, Something about birds

He maybe had a spare version of himself which had some sort of remote device where the spare would activate if the original was damaged. The spare maybe was also withered from age.

Wheatley is a computer. He can always switch forms, because a computer has no set hardware. Their code can be sent through different systems, like sending GLaDOS through a MacBook Pro.

When Wheatly is rambling on about how he was saved as you jump up and down on the faith plate, the only clue he gives is something about a bird. This is probably the black crow that is trapped in Aperture labs who keeps reappearing throughout the game. (carries off PotatOS, attacks Wheatly for destroying its eggs, etc.) I'm not exactly sure how the bird would help him. If I were to guess, I would say he was rebuilt by nanobots. They aren't in the game much, but Wheatly briefly mentions them when he says they are rebuilding the elevator. If they can rebuild elevators, why not personality cores?

I think the Half-Life wiki said that the official VALVe guide said that Wheatley somehow managed to reactivate himself using a spare core. I have no idea how he managed to do that while deactivated though

15
Is there any way to escape the “good listener” room?
36
What is Caroline's fate at the end of Portal 2?
13
Is it at all possible to install Portal 2 purely from retail DVD?
60
Does Wheatley actually look for my dead body after an hour?
20
The Lone Turret
8
Is there any story to the bird?
6
Why do the indicators above doors stay gray in Portal 2?