Is it possible to tell a fleet to ignore targets?

Quite often when moving fleets around hostile gravity wells, they will stray near a valid target and engage them in a pitched battle.

However, I would like a fleet to avoid a battle unless specifically told otherwise. The 'Fleet stance' toggle button does not seem to have the intended effect- setting it to 'Evasive' causes an FTL jump to be triggered if a hostile fleet is present in the same system; however targets are still engaged with wild abandon.

My intent is to try and get a fleet caught behind enemy lines home safely. It has a small head start on the much larger doomstack pursuing fleet: 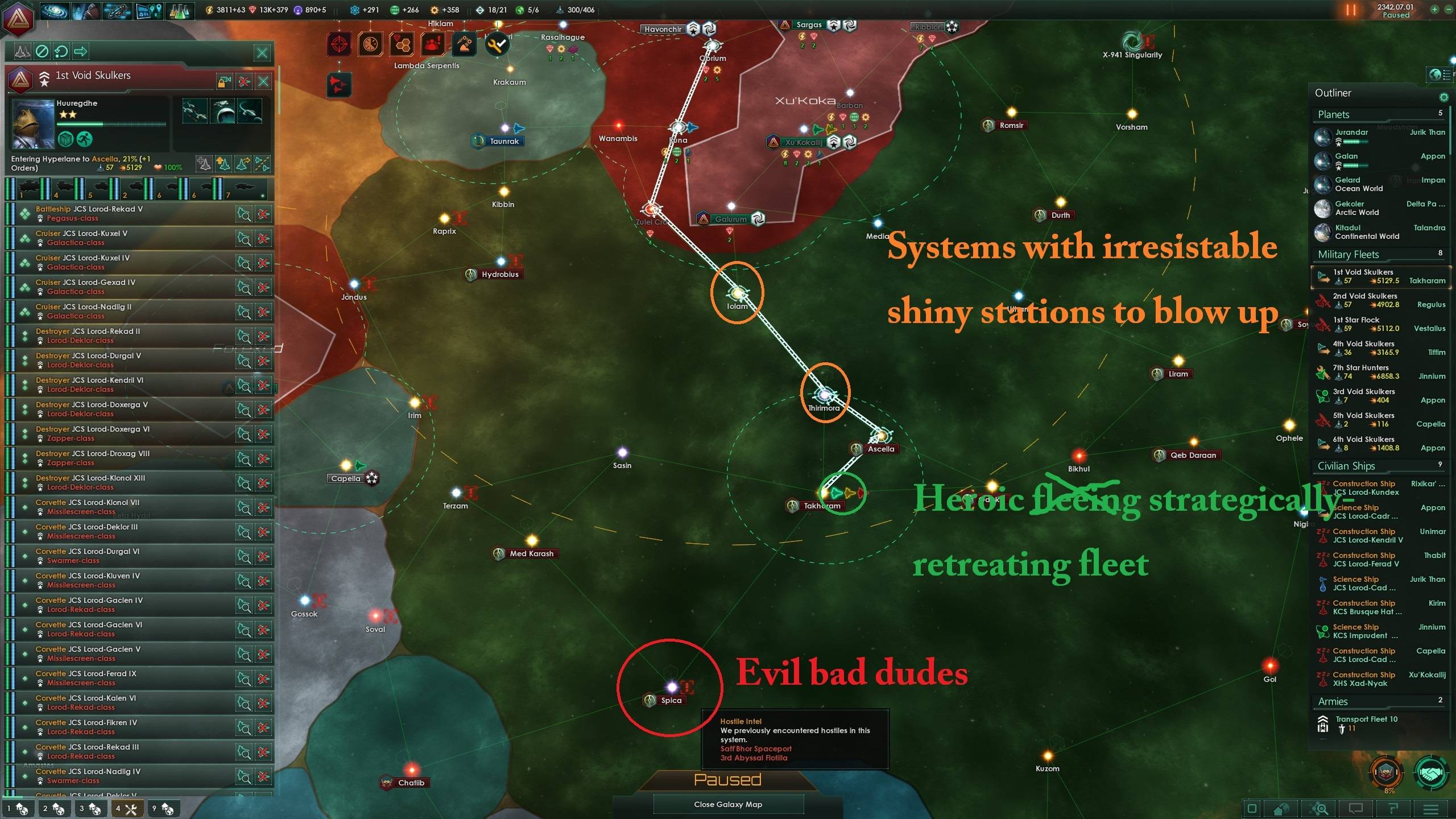 But since it is retreating through enemy systems, it will likely get caught up on a station near the FTL exit point, whereupon the pursuing fleet will be able to catch it and do significant damage even before the emergency FTL spools up.

How can I get this fleet home safely, without it stopping to engage a pitiful-but-obviously-very-strategically-important research station along the way?

This has a clear second type of use as well: if an interdiction fleet - say one that has a battleship with an FTL inhibitor - wants to hold an enemy fleet in a system for destruction, it would be handy if you could give the fleet a clear order1 to engage that fleet first and foremost, and not the mining station that happens to be in between the two fleets.

1: I know fleets in Stellaris are supposed to have a fairly large degree of autonomy, for example in regards to battle engagement doctrine, so this behaviour may be intended.

It's just unfortunate that the autonomy they have means engaging pointless targets, or equally comically the thinking that goes "Hey, my fleet is equipped with long range armaments and theirs is short. RAAAGH LET'S CHARGE TO RAMMING DISTANCE!"

If there is a station directly at your exit point, you are out of luck, but your fleet should destroy it quickly. The likelihood you'll encounter a station at the edge of engagement range at your exit point is minimal. But if that happens, there simply is nothing you can do, except hoping you can hit emergency ftl before your fleet destroys the station and get away with minimal losses. Comment is initiated and emergency ftl is forced, when two fleets clash, even if it is a puny mining station with barely any weapons, that's just how the game mechanic works. If you have to move through an enemy system you can only try to avoid the stations by moving around them.

Since you use hyperspace travel, which has no cooldown and no requirement where to be inside a system, even if you were to exit at a hostile military station, your ships could spool up their hyperdrive directly from the spot they entered the system at to jump to the next one right after destroying the station. Since those stations usually are in the middle of the system you should have enough time to get out.

By the way, why do you detour to Ascella? From your current system there is a hyperlane directly towards Thirimora.

4
Is there a way to tell how long it will be until my population grows?
6
Is there a way to force non-combat ships to stop "Evading hostile fleet"?
5
Is it possible to cancel an uplift project?
7
How to tell if mods disable achievements?
5
How to tell which planet is habitable in Stellaris?
5
Is it possible to somehow remove a state from an alliance?
3
How do I set a fleet to orbit a planet?
1
Queue multiple attacks with fleet works but landing army cannot queue multiple planet invasions
2
How does a 5K Star Hold lose to a 2.8K fleet?