What is the term used to describe objects appearing from nowhere?

The "View Distance" setting allows the user to mitigate this behaviour by causing things that are further away to be visible at the expense of system resources.

In conversation, I've noticed one person use the word "Pop" when referring to this, so in an effort to find the correct term I came across the following wikipedia article Popping(computer graphics), which seems to be very much related to the behaviour I have described, but differs in that it's about transitions from one level of detail to another, rather than the instance of an object suddenly appearing out of nowhere.

What is the term used to describe this?

Different users will have a term they use, and some may be more popular than others, or more specific to a certain situation. Blizzard, themselves, refrain from using a specific term for the behavior, when talking about it in a blog concerning graphical improvements in the upcoming expansion, Legion. Instead, they simply explain why it happens.

I will offer an explanation on both Possible Terms and Related Terms, and suggest that you choose your terminology for the situation. If you have to bring up the behavior in the middle of a raid, you do not want to add to the confusion by having to explain technical jargon to 30+ other players. Likewise, more technical terms can more accurately define the exact occurrence you are experiencing.

I will also explain Draw Distance, the mechanic behind the behavior you are experiencing, to help further explain both the terms and why this is actually happening.

OK, so you know why it happens, now. But what do you call it? My recommendation: whatever you want to. The thing about draw distance is that it exists in some form in basically every video game you have ever played. Assuming your computer meets the recommended system requirements for running World of Warcraft, you should never run into a situation where you were adversely effected by your ability to see further than the maximum draw distance. As a result, you should never run in to a situation where it is imperative that you inform other players of the limitations of your draw distance. It just doesn't happen.

There are some other terms you may come across in relation to draw distance, and the 'popping' effect of game objects. It might be worth addressing these terms, and the correct use, in understanding the terms listed above. 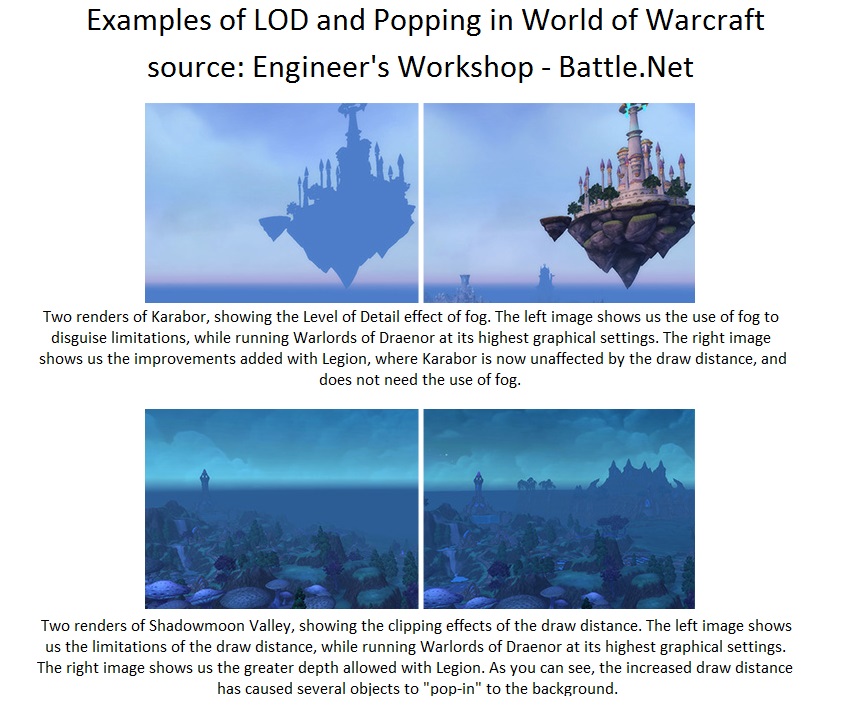 Changing the View Distance does not just mitigate the behavior - it directly relates to why it is behaving that way, in the first place.

When you play any game, you are typically looking through a "game camera". In Game Development these cameras can become quite complex, but in layman terms, they simulate real cameras to determine how to render the scene to the computer monitor1. 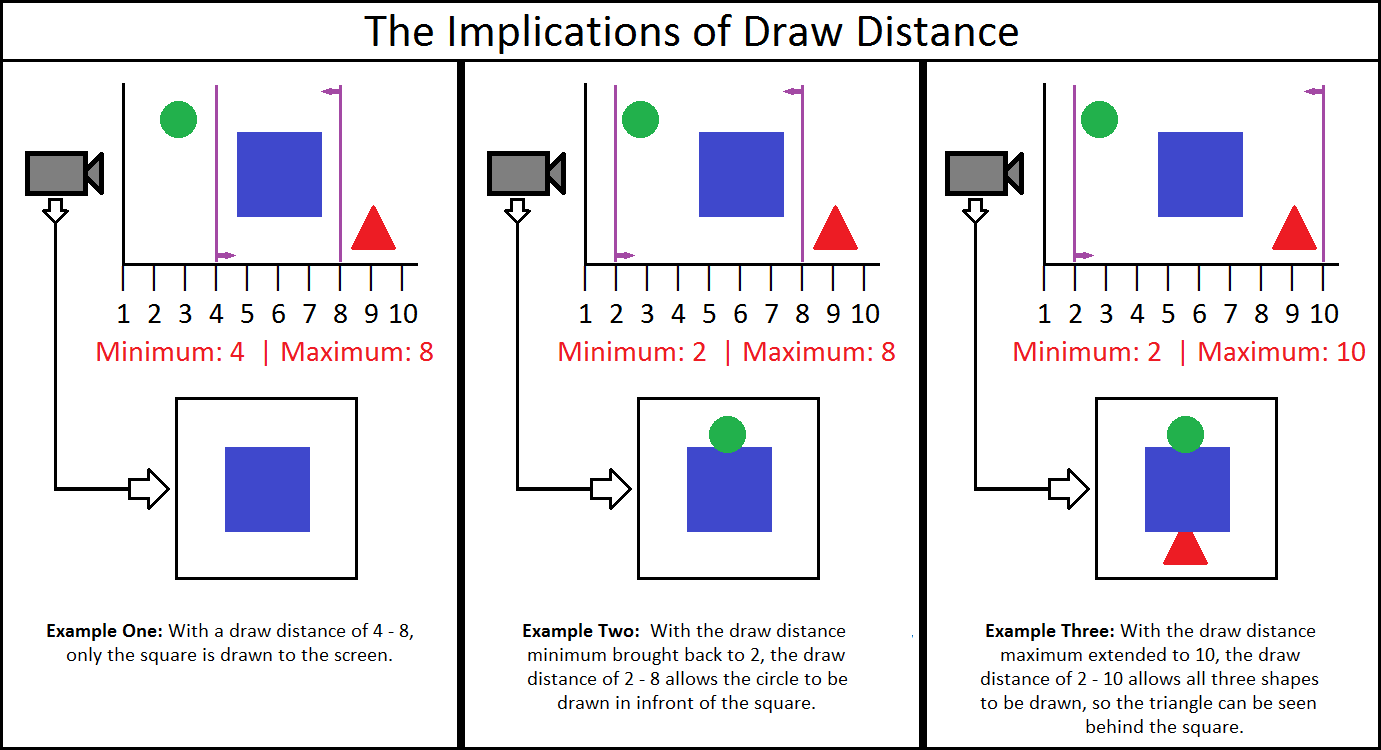 1 OK, so it is not quite that simple, but for the purpose of this answer, that is as much as we need to know. 2 It would be desirable if we could draw "forever" (or as good as the human eye can see). In computing, this would lead to extensive resource use, and potential critical failure. As a result, the limitation enforced by the draw distance is a necessary, sometimes undesired, solution to a known graphical issue. Alternatively, efforts to smooth the draw distance could conflict with poor graphic card configurations, especially in cases where the graphic card is itself faulty.

This is typically referred to as an object being "drawn". The distance at which is occurs is known as Draw distance.

Wikipedia has an article on this, specifically relating it to video games and the "popping" phenomenon it produces. Here is an excerpt:

Older games had far shorter draw distances, most noticeable in vast, open scenes. Racing arcade games were particularly infamous, as the open highways and roads often led to "pop-up graphics", or "pop-in" – an effect where distant objects suddenly appear without warning as the camera gets closer to them. This is a hallmark of short draw distance, and still plagues large, open-ended games like the Grand Theft Auto series and Second Life.[citation needed] Formula 1 97 offered a setting so the player could choose between fixed draw distance (with variable frame rate) and fixed frame rate (with variable draw distance).

Is there a way to force objects and textures to fade in rather than pop in when a new uGrid is loaded, or is that just how the engine works?

The thing about LOD is that it requires a low detail mesh, and not everything has that. Some objects do, but most don't. That's why you get that pop in (or up or whatever).

–LOD fade instead of pop in? –forums.nexusmods.com

"The LOD-ing algorithms can depend on more factors than just distance from the viewer, but it is often the primary factor that is considered. Popping is most obvious when switching between different LODs directly without intermediate steps." –OP's link

"Draw distance" is the setting that determines when it will : pop, fade in, be rendered (on screen), or otherwise appear.