How do I get the pixel sprays for each character?

While playing today, I got some cool "Pixel" sprays for beating certain character-specific achievements. 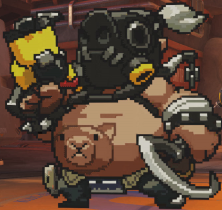 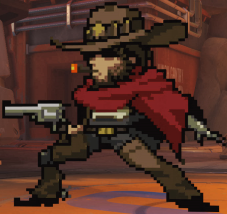 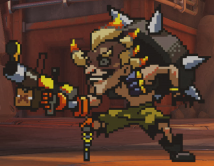 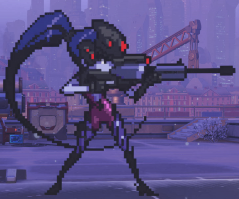 I want them all! What do I need to do to get each one?

Each character has two achievements. The "Cute" sprays are generally (but not universally) tied to skillful use of ultimate abilities, while the "Pixel" sprays are tied to more general use of the character. Specifically, the Pixel sprays are rewarded for:

Ashe: Kill an enemy by shooting Ashe's dynamite from at least 30 meters away

Bastion: Get a total of 2 eliminations while in each of Recon mode, Sentry mode, and Tank mode in a single life (the Tank kills do not have to be in the same use of the ultimate)

D.Va: Block 1500 damage with a single use of Defense Matrix

Genji: Kill 2 enemies with a single activation of Deflection

Hanzo: Get 3 killing blows with a single use of Storm Arrow.

Junkrat: Use Concussion Mine to knock an enemy into your Steel Trap

Lúcio: Get 3 killing blows while wall-riding in a single life

McCree: Interrupt an enemy ultimate with Flashbang. (Not all ultimates can be interrupted)

Mei: Block 1200 damage with a single use of Ice Block

Mercy: Heal at least 200 damage on each of your five allies in a single life

Orissa: Pull enemies into 1000 damage with a single use of Orissa's "Halt" ability

Pharah: Push someone to their death off a cliff using Concussive Blast

Reaper: Kill 3 enemies in a single clip (that is, without reloading. You can use Death Blossom to soften them up, but the killing blows have to be with your primary fire)

Reinhardt: Block 8000 damage with Barrier Field in a single life

Soldier 76: Get 2 killing blows with a single use of Helix Rockets

Symmetra: Hit an enemy with 3 beams at once (two of your sentries, plus your primary fire)

Tracer: Recover a total of 400 health with Recall in a single life

Widowmaker: Get 4 kills with Venom Mines in a single match (You can soften an enemy with your rifle after they have triggered it, as long as the damage-over-time from the Mine gets the killing blow)

Winston: Destroy a total of 10 turrets (Torbjörn's or Symmetra's) and/or mines (Widomaker's or Junkrat's) using your Tesla Cannon in a single life

Zenyatta: Get 4 assists or eliminations within 6 seconds using Orb of Discord

3
How do I spectate a game I am in?
0
What are the character specific achievements?
5
Where are the Brawl stats
12
End-game card priority? How does it work?
1
What happens when you reach the 25th spray?
13
Is it true that you get a better ranking while playing offensive characters than while playing support characters during placements?
4
When do assists show up in the kill feed?
3
Can you get higher than a Sextuple Kill?