Is the runic writing in the Dark Souls series based on anything?

I've seen in other game series that an in-game language corresponds to some real-life language, such as the various forms of Hylian in the Legend of Zelda series. I had never questioned that the runes that make up a summon sign or a message actually meant anything in Dark Souls until inspecting the inscriptions on the back of the thrones in Firelink Shrine. Each one appears visually different. If it were any other game series, I'd just assume it were a minor detail, but I can't assume that here. Cursory googling has led me nowhere. Is there any evidence confirming or denying that the runes in Dark Souls actually translate to something meaningful, or do they simply look cool?

Note: I tagged both the series and Dark Souls 3 because I'm not sure if the language had always been there, or if it just now "showed up" so to speak in the third game.

TL;DR: looks like more than one language (or character set) are used. One of them could be based on Futhark

Well, I did quite a bit of research.

I have installed DS1, DS2:SOTFS and DS3 (as every fan should), so I've checked and screenshoted following things:

I will add all screenshots in the end of answer grouped by games.

1. For player messages and summon signs - all three games uses exactly the same pattern, but in DS3 it's mirrored! I'm judging by the 'rune' which looks like '4' in DS1 and DS2.

2. Summon signs. All summon signs have exactly one pattern - so there is no difference in red and white summon signs. I've tried to google 'runic languages' and find out one of the oldest one - Elder Futhark. All runes from summoning sign (DS3 version) was present there! So I've attempted to 'decode' summon sign. I've got something like this:

Which rune by rune means:

I've also attempted to google translate the word itself "wpegius", but nothing interesting: "pegius" could mean "Pegasus", but in my opinion this is wrong track.

3. Player messages. Unfortunately, the previous point could be all wrong: in player message pattern there are some 'runes' which are not in Futhark - for example one could find two different variations of rotated '9' (or 'e').

4. Majula message. Looks like it contains absolutely different set of symbols. One could see 5 line of symbols. Lines 2 and 5 are equal. While some symbols are present in many alphabets, I failed to find "snowflake" symbol (line 1, symbol 10 or line 3, symbol 2) anywhere.

5. Messages on lord thrones. The letters are worn beyond recognition... So, the quality of textures there are poor, these look more like random scratches. 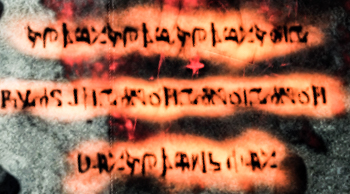 TL;DR: There is no confirmed source for anything about the Language, I am however looking into it myself now.

As far as my research went I couldn't find anything about the writing being based on something or meaning anything, this however did get me interested in looking at the actual langauge in the game a bit more, I'll see if the signs do actually correspond to actual words / letters consistantly across all Dark Souls games. If you're interested I can update this answer if I find something interesting about that.

Someone on reddit said that he read somewhere that the symbols are based on a dead Language and when tried to translate only spells out gibberish. Will look into it however.

Since the Souls series is such a big franchise now and is known for its hidden lore and secrets, I wouldn't doubt that they made up an entire language that is consistant across all 3 games, with maybe slight changes because of the time that has passes between what happened in Dark Souls 1, 2 and 3.

I see a few symbols (best viewable in the white soapstone mark from DS1) that look a LOT like written Hebrew. I can't upload a picture right now, but I'd say that the devs were very much inspired by Hebrew, if they didn't just rip a few letters right from it.

This may be a reach but... The writing looks like it could be the same as the 8,600 yr old ancient Chinese turtle-shell/shoulder-blade oracle-script divinations (part of ancient practices of pyromancy!) At first glance they seemed like norse/celtic runes. But i think they look closer to the Phoenician alphabet. Perhaps they combined several ancient runic alphabets lol

Not the answer you're looking for? Browse other questions tagged dark-souls-3 dark-souls-series or ask your own question.