What is the meaning of “Missing in action” in Stellaris?

The war has just ended in a great victory, the Empire is celebrating, the people are rejoicing.

But the entire fleet, and a science ship are "Missing in action".

Our commanders are worried, the Empire is defenseless, what will be the fate of our fleet?

There is a MIA icon on the top notifications area, hovering over it tells what the arrival due date is. Adding MIA due date information: 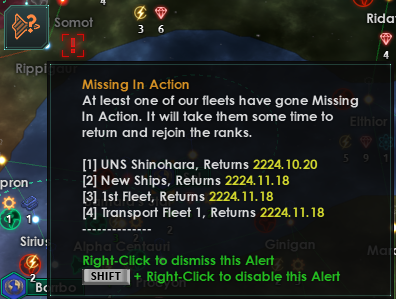 It means your ships had nowhere they could legally be after the war ended, so they are making their way home individually.

When a war (or access treaty) ends with your ships in a now illegal position, one of two things will happen. If they can move to a legal system, they will travel to it on their own. You won't be able to control them until they get there, but it's usually very quick so hardly ever an issue.

However, if there are no legal systems to move to (happens most often with hyperlanes, if the system and all connected systems are now blocked territory), they go "Missing in Action". They will slowly make their way back to your Capital and reappear after some amount of time. The tooltip over the fleet will tell you when they are due to arrive.

A science ship going missing during an investigation is an event, and not related to military ships going MIA after territory access rules change.

When you lose travel access to a system your fleets are occupying, the fleets will become "missing in action" for a period of time before they go back to a point they can access (I don't know exactly how this is determined, it seems to be the closest system with a settlement). You can see when they will arrive if you hover over their icon on the fleet menu on the right side of the screen, or the notification box at the top.

It seems like the time it takes for them to reach their destination is longer than it would usually take if they were being controlled directly, but I have not verified that.

35
How to increase influence in Stellaris?
10
What's the function of insult in Stellaris?
3
Where is Stellaris screenshots location?
9
How does the happiness affect the population in Stellaris?
6
How should our glorious civilization incorporate two neighboring fallen empires?
10
What do the different colors of my fleets' firepower mean in Stellaris?
1
Stellaris Apocalypse cc problem